Legendary comedian and incoming Late Show host Stephen Colbert delivered a humorous, heartfelt and thought-provoking address to the graduating class of 2015 on May 18.

In his speech, Colbert — who seemed to leave behind the conservative pundit persona he depicted on his Comedy Central hit The Colbert Report for nine years — discussed Wake Forest’s culture and history as well as his own career in a speech that has generated national headlines.

“I hope you find the courage to decide for yourself what is right and what is wrong, and then please, expect as much of the world around you,” Colbert said in his address. “Try to make the world good according to your standards.”

In an exclusive interview with the Old Gold & Black just before the commencement ceremony began, Colbert said his goal at CBS’s Late Show, which he will begin hosting in September, will fundamentally remain the same: making people laugh.

“The day presents you with the material,” Colbert said of his past and upcoming roles. “You can’t predict what form it will take until you get there, and you just have to relax and say ‘oh, well we’ve written 1,500 shows, and we can write a few more.’”

When asked whether his conservative, patriotic persona will ever re-emerge at the Late Show, Colbert didn’t quite give a firm response.

“I promise you I will be Stephen Colbert on that show,” he said. “I guarantee you —that’s my name.”

His speech drew much laughter from the crowd of some 12,000 faculty members, graduates, family and friends. Colbert poked fun at, while also paying tribute to, the university’s history and traditions that students know so well, including rolling the quad. Dean Shore, the university barber and unofficial photographer, got a special shout-out as well.

But the current crossroads at which Colbert now finds himself certainly resonated with students who are preparing to enter the work force and leave behind Wake Forest’s campus.

“I just spent many years learning to do one thing really well. I got so comfortable with that place, that role, those responsibilities, that it came to define how I saw myself; but now that part of my life is over,” he said. “It’s time to say goodbye to the person we’ve become … and to make some crucial decisions in becoming who we’re going to be. For me, I’ll have to figure out how to do an hour-long show every night. And you at some point will have to sleep. I am told the Adderall wears off eventually… good luck.”

Looking ahead, Colbert encouraged students to create their own standards for success and to grade themselves “on a curve” while working to make the world a better place.

“Try to make the world good according to your standards. It won’t be easy; get ready for my generation to tell you everything that can’t be done, like ending racial tension, getting money out of politics and lowering the world’s carbon emissions — and we should know they can’t be done; after all, we’re the ones who didn’t do them,” Colbert said. “You’re job, pro humanitate, is to prove us wrong.” 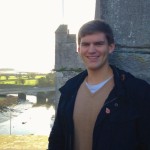