The cool November winds and daunting final exams often leave students feeling adrift at the mid-year mark. At a crossroads, many students cling to pre-established friendships as they wonder what else the university has to offer.

Three Wake Forest seniors are exploring beyond the confines of immediate social circles through the Dinner with 7 Strangers initiative. Founders Barrett Redmond, Sophia Dodd and Courtney Ergen hope that pre-arranged meals with peers from all corners of campus will foster a more interconnected community at Wake Forest.

“Now more than ever, it’s important to bring our campus together to focus on our similarities rather than our differences,” said senior Barrett Redmond. “Our country is so divided, and campus is a small microcosm of that. Dinner with 7 Strangers provides an open platform to talk and meet new people.”

The initiative is modeled after an identical program started at Georgetown University in Washington, D.C.

“Georgetown has a competitive social scene, and Wake Forest can feel that way, too,” Redmond said. “It’s a good way to break down those barriers and get people talking outside of their social circles.”

“Facebook might be a superficial way to judge [friendships], and it doesn’t account for a lot of acquaintances, but it’s done a pretty good job,” Redmond said. “I’ve come to terms with the fact that not everyone will be strangers, but they’ll be better friends after dinner.”

Unlike the Georgetown program, however, the dinners are not sponsored. Accepted students are required to Venmo five dollars to reimburse the host for the cost of the meal.

“Originally I applied for a grant through the entrepreneurship department,” Redmond said. “I wanted it to be free and super inclusive, but the type of grant available didn’t match our initiative.”

Undeterred, Redmond recruited Dodd and Ergen to make her aspiration a reality when the three students were placed in BEM 318: Calloway Leadership Experience with Professor Holly Brower. The class requires students to create a legacy project encouraging people to do things they wouldn’t otherwise do on their own.

“It’s important to broaden your horizon,” said Dodd. “The three of us know different people on campus who come from different backgrounds, so it’s extremely interesting to hear their perspectives on life as a whole.”

In just two weeks, Dinner with 7 Strangers has facilitated three successful dinners and accumulated a waiting list of 60 students. Participants of all grade levels have responded with positive feedback, and the signup list continues to grow.

“Initially, I thought of community solely as inclusivity,” Dodd said. “Although I think that still holds true, it’s in a different light now that we’re seniors. We’re celebrating each other’s differences rather than fitting into one mold. Community isn’t something you have to fit into; it’s something that continues to grow and adapt.”

“Community is a group of people that you are challenged and embraced by,” said Ergen. “It’s important to always keep growing that community. You never know what you can learn or what you can teach someone in just sharing a small meal.” 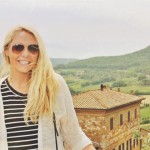 Caitlin is a junior studying communication with minors in film studies and journalism. She enjoys covering events, trends and travel for the Life section of the Old Gold & Black. Caitlin hopes to pursue a career in journalism after graduation. When she’s not in the office, you can find her working as the Four Seasons Magazine intern, suffering through an intense spin class or eating copious amounts of chocolate covered coffee beans.