President of her sorority, staff leader at the fitness center and a business and enterprise management major with a history minor, junior Krissy McGrory has a full schedule.

Yet, on top of her extracurricular commitments, McGrory, like some other Wake Forest students, takes out her own student loans to cover the cost of tuition.

“Paying for college is an incredibly tedious and annoying process,” McGrory said. “Between FAFSA, IDOC, CSS and applying for private loans, I have to take hours that could be focused on my academics in order to lock in my financing for the years to follow. As a student who has to do this all herself, it is extremely burdensome to jump through all the hoops necessary to be able to attend Wake Forest.”

For students such as McGrory who take out private loans, any increase adds additional stresses to attending an already expensive institution.

“Not only does the increase just mean I have to pay 3.65 percent more than the year before, by the time interest and the rest of my debt is factored in it adds a much larger amount to my long-term debt,” McGrory said. “Emotionally, the stress of having an enormous amount of debt is with me every day and hangs over my head. Further, because I pay the interest on my student loans in college, an increase will force me to increase my work hours in order to cover these bills, which adds even more stress and obligations to my day-to-day schedule.”

Yet, tuition increases are not unusual for higher education institutions. Amanda Griffith is a professor in the economics department whose research focuses on access to education for low income and minority students as well as their success during college.

“Tuition increases are very important for maintaining and increasing quality,” Griffith said. “There are always new things that need to be done to increase quality of the institution or even to keep up with our competitors. Unfortunately, money has to come from somewhere and tuition is one place it comes from. But I think Wake Forest overall does a good job at keeping tuition increases reasonable.” 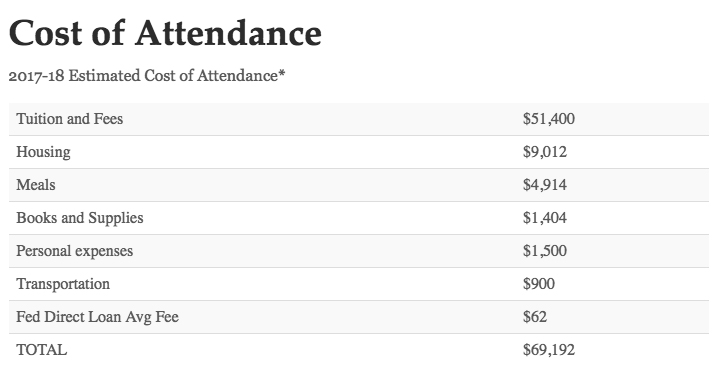 A similar question regarding the financial policies of Wake Forest is that of accepting international students.

Following trends from other schools, increasing the amount of admitted students from other countries is strategic in one element, as these students are required to pay full tuition.

“I definitely pay full tuition every year, which is not unusual for Wake Forest students,” said Isabella Zhang, a senior from China. “I don’t really feel the effect because my parents can support me, but I feel bad for other international students whose parents had to sell three properties in China just so they could come to school here for four years.”

However, Zhang questions whether or not Wake Forest is increasing the amount of admitted international students for financial reasons or a genuine interest in embracing diversity.

Regardless of the reasonableness and the rationale behind the tuition increase, the exacting impacts on the student body cannot be ignored. For some, this slight increase adds more tension to an already high-stress educational environment.

“We pay a lot to go to an amazing school,” McGrory said. “Though I do believe the value of an education at Wake Forest is worth what it costs, I believe there are better ways to achieve funding than raising the tuition of students who work tirelessly to maintain good standing with the University. For a student who already has difficulty affording this education, a tuition increase can be a huge turn-off and may even deter financially needy applicants from choosing to go here in the future.”

Heather is the Online Managing Editor for the Old Gold & Black. She is an economics major with politics & international affairs and journalism minors and will talk anyone’s ear off about the aforementioned topics for as long as they’ll listen. She’s currently in a phase of trying to understand and invest in Bitcoins, but in the meantime also loves hiking, riding her bike, eating burritos and traveling.