Perhaps the most highly-anticipated rock album of the year, the Killers Wonderful Wonderful has made many people excited for its release — the band’s first since 2012.

I get the hype. Many people even think that this album will be the first Billboard number one. Personally, I am a big fan of their first album Hot Fuss and eventually lost interest with their more recent albums. But just scrolling through music news and seeing the Killers releasing an album catches the eye. This album is a big deal.

With that being said, I will be straightforward and tell you that I could not really get into its sound. If I could sum up this project, I would call it slow, atmospheric rock with a somewhat labored interest in using deep and biblical lyrics.

Project is a word that I think most people would use to describe this album. It did take five years to put together, and it represents perhaps the band’s greatest effort at creating a collaborative piece. How many Killers band members can you name? Brandon Flowers. That’s right, just one.

That’s what I think one track on the album, “The Man,” acknowledges. Flowers seems to reminisce on his Hot Fuss days, where everything he wrote turned into musical gold.

To extend the metaphor, Flowers and the Killers were heroes, the faces of the alternative rock world a little more than 10 years ago. But then, the hero got lost in the desert, having to prove their metal against criticisms and adversity. With their last album, Battleborn, I think many would say that the band got off-track. Maybe not off-track critically, as many who reviewed the album praised its “bigness” and flair. To the casual fan, however, the Killers were falling behind in radio play when compared to competitors such as Arctic Monkeys.

The title track “Wonderful Wonderful” may address this moment for the band. I use the analogy of the hero in the desert because that is the exact image the band invokes in this track. The religious subject matter of the lyrics cannot be ignored. “Keep your ear to the shell,” the lyics read, “stay on the path that leads to the well.” This “path” might be read in many ways, but to me the sense is that The Killers are referring to a kind of faith that had in their own work, and that Wonderful Wonderful may be the “well” that will reward them for their perseverance.

Despite how I feel about the album’s success, that is a mentality that I can get behind. Like I said, though, the instrumentation and other stylings of the album are slow and labored. It’s like I could see the mental wheels turning in Flowers mind as I listened to the record. Overall, with close listening, one may respect the intricacies of the album. But a work of rock and roll genius it is not in light of its immense hype. 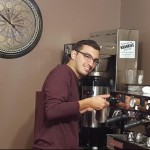