Following racist scandals involving Virginian politicians, the university addressed the presence of racist references and photographs in old editions of the Howler, as similar photographs surface in the yearbooks of other universities.

Released on Feb. 8, the official statement given by the university discussed President Nathan Hatch’s condemnation of blackface, the university’s role in the consortium of Universities Studying Slavery and the commission of a historian to complete a more full documentation of Wake Forest’s history.

“In times like these — times of ‘government scandal’ or ‘national tragedies’ or ‘challenges to civility and democracy’ or ‘searching for solutions to grand problems’ or, in the case of this past week, ‘reckoning with historical, persistent and systemic racism’ — it becomes a moral imperative that Wake Forest commit time, space and facilitation for conversation, as well as action,” said José Villalba, vice president of Diversity and Inclusion and chief diversity officer for Wake Forest.

On Feb. 1, a photograph surfaced of two men, one dressed as a member of the Klu Klux Klan (KKK) and one dressed in blackface, that appears on the yearbook page of Governor Ralph Northam of Virginia from his medical school days. Although he has gone back and forth on whether or not he was in the photograph, he claimed to have previously dressed in blackface. The photograph has caused a lot of backlash, but Northam has insisted that he will not resign. In addition, the Attorney General of Virginia, Mark Herring, has also admitted to dressing in blackface in the past.

In the wake of these instances, other universities such as UVA and UNC have begun audits of their own yearbooks. Between 1903, when the first issue of the Howler was published, and 1987, there are a range of references to lynching, the KKK and other racial slurs in the text. The old editions also include photos of students dressed in blackface, KKK-style uniforms and Confederate flags.

The instances of individuals wearing blackface show up most prominently between 1952 and 1979.

In a photo from the latter year, two students are shown dressed in blackface and holding lanterns with the caption: “All and all the complexion of the campus changes drastically as students dress up and parade to parties.” 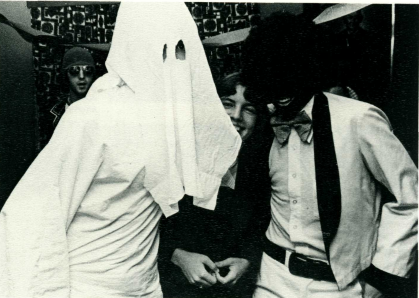 “Wearing blackface is racist and offensive — then and now,” Hatch said in the official statement. “The behavior in these images does not represent the inclusive university we aspire to be.”

According to Katie Neal, assistant vice president of News and Communications, Wake Forest alumnus and Southern historian Andrew Canady, who is currently an assistant professor of history at Averett University, will be conducting research on the role of slavery and enslaved people in Wake Forest’s history.

In an interview with the Old Gold & Black, Villalba commented on the importance of documenting the university’s past.

“We can look forward and backwards,” said Villalba. “It’s like driving; you are constantly checking your rearview mirrors and blind spots while you’re heading down the road. I think that moving forward in a productive manner is acknowledging that for a significant portion of our community, particularly our African-American students, staff, faculty and alums, we need to look backwards.”

More than one-third of Americans think that it is sometimes okay to wear blackface for a Halloween costume, according to a recent Pew Research Center poll. On the other hand, 53 percent say that is never okay.

The practice of wearing blackface began during the 19th century with minstrel shows. In the 1967 issue of the Howler, a group of students is pictured in blackface at a carnival. The caption read, “Narrated by Celie ‘Mammy’ McAdams, the Fideles presented a variety show complete with minstrels, comedians, and dancing girls.” In 1962, the year Martin Luther King Jr. spoke at the university and the year Wake Forest enrolled its first black undergraduate student, another student is photographed in blackface for a beauty-pageant style fundraising event.

Villalba said that the Intercultural Center, along with the Women’s Center and LGBTQ Center, will continue working to create programming focused on “inclusion and equity.”

“Being able to confront and reckon with our troubling, complex, and sometimes unclear history is part of not only creating a diverse community, but more importantly, one that aspires to be more inclusive,” said Villalba. “And that’s why it’s important for Wake Forest to have these conversations.”

Olivia is a junior from Miami, Florida, and plans on majoring in politics & international affairs and minoring in English and French studies. In her spare time, you can find her scrolling through political Twitter, watching obscure French films or daydreaming about working in the Bon Appetit Test Kitchen.