Sitting in an Airbnb, looking out over the cobblestone streets of Rome, I experienced a sense of overwhelming perplexity at how such a magnificent power can fall so hard and so fast. Driving through the streets, I observe titanic structures like the aqueducts, the Pantheon, the Colosseum and many others. A similar feeling arises when walking through the streets of Athens, Greece. High above the sprawling, white marble city of five million, the intimidating Acropolis oversees the entirety of their civilization. Take a ferry east, to Turkey, to the land formerly called Constantinople, and you will see an overwhelming mix of Christian and Muslim architecture, as the two religions competed for thousands of years for the strait to the Black Sea. This would be the cornerstone of one of the longest-living nations ever –– the Ottoman Empire.

Where did these empires go? Why such a quick exchange (Greek to Roman, then Roman to the Ottoman, etc.)? Do we see a similar empire that is as domineering today? I believe that (usually) an empire that grows to such might is doomed to fall. Nowadays called “hegemon,” these overly dominant civilizations ran the world at one point. As for the ancient Greeks, we see the first efforts to preserve and defend a participatory democracy. Rome did likewise. In fact, we see Rome’s passion for a liberal democracy in the story of Julius Caesar. Caesar, elected to the throne of a democratic Rome with a functioning senate, was a beloved leader. Publicly praised and diplomatically feared, Caesar carried Rome to an unfathomable number of victories. His famous “I came, I saw, I conquered” phrase represented the ease with which Caesar’s Rome defeated its enemies. With such success, Caesar didn’t see any logical reason as to why he should ever discontinue his service as Rome’s leader. For this reason, he proclaimed himself emperor of the great nation. This unsettled many people, including his close friend Brutus, to the point that they decided that Julius Caesar was a disgrace to Rome’s revolutionary future. For his proclamation, Caesar was stabbed to death by his guards and very own friend, Brutus, on March 15, 44 B.C.

Rome is a special case because it saw the fall of Caesar, the life of Jesus Christ and the crusade of Constantine during its existence. Eventually, the great power fell. In Greece, we saw the young Alexander the Great lead his troops through Asia, extending the Hellenic Empire all the way to India. This colossal nation met its ruin when Alexander the Great died from sickness on the way back to Athens. The Ottoman Empire came to fruition shortly after the conclusion of Rome and lasted all the way until World War I. However, once struck by the power of modernity, the Ottoman’s could no longer keep their dynasty intact. Imprisoned by their age-old customs, the 20th century proved to be detrimental to their life span.

Next, we see the rise of fascism in the conjoined Prussian and German Empires, where young political candidate Adolf Hitler was able to distort the German Weimar Constitution just enough to fit his agenda. Nazi Germany expanded throughout the continent, killing and torturing their enemies and, most infamously, a vast portion of the European Jewish population. Once the Nazis were stopped, it was time for a new empire to move in: the Soviet Union (Russia/USSR). Under the iron fist of Joseph Stalin, the communists reached a novel level of evil. The red nationalists ended the lives of more innocent people than did even the fascists. This empire extended its reign into the 1990s. The degeneration of the USSR began with immense pressure on its “soft” leader, Mikael Gorbachev, by President Ronald Reagan, Margaret Thatcher and Pope John Paul II (along with efforts from Winston Churchill). With the pressure of these three international liberals, Gorbachev modeled his new policies after Reagan-like capitalism and slowly moved Russia out of the communist scope and into the liberal scope. This was the genesis of a revelation for the Soviets.

Now, what do we have? What empire? Political scientists will tell you that we are currently without one. They will even go so far as to tell you that our world has been without a hegemonic power since the 1970s, when America lost much of its economic dominance to China. However, in terms of power, the United States clearly dominates the world. With the most diverse economy and (by far) the most powerful military in the world, the United States exhibits similar capabilities to ancient Greece and ancient Rome. So, what has changed since the era of mass conquering? In my opinion, it’s not power, but motive. America owns a sense of benevolence that was nonexistent 2,000 years ago. Recently, we have spent exponentially more money assisting nations other than ourselves (ex: Iraq, Kuwait, Iran, Afghanistan, Syria, Libya, Somalia and more). This would’ve been unheard of in the times of the Romans.

If Francis Fukuyama is right, we really have reached the end of history. Does this mean that the classic, ancient way of empires conquering each other is extinct? I think so. In fact, I think that time has stagnated and settled on the world order that we currently see. So, in looking for a modern-day Rome or Greece, look all around. It must be our home: America. And considering that we aren’t burning any Christians at the stake or putting peasants in a stadium to fight to the death, I think we’re setting a pretty decent precedent. President Lincoln said that America will meet its ruin only if we let it. No outside power will ever knock us down. So, in that case, I think it’s pretty cool to think that we may just be the modern-day Rome. Except maybe, just maybe, even bigger and better. 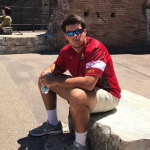