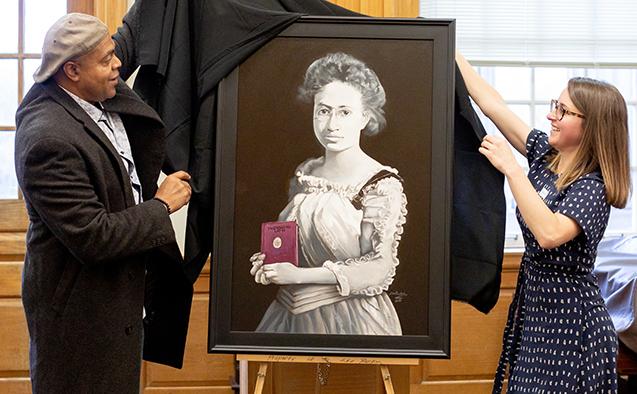 Postdoctoral Fellow Caitlin Hines and artist Leo Rucker unveil of his portrait of Helen Maria Chestnutt as a part of “14 Black Classicists: A Photographic Installation” in the ZSR Library on Friday, January 17, 2019.

When professor T.H.M. Gellar-Goad from the Classics department first introduced his “Classics Beyond Whiteness” initiative last fall, the idea was to have a year-long multidisciplinary programming that could shed light onto the role that Classics plays in race relations and some of its current social implications.

The initial half-semester course originally opened for 15 students, but quickly was filled beyond capacity with 26 students registered. The interest among students exceeded expectations and the opportunity for deeper discussions about changing a historically white field of study soon followed.

Fast-forwarding to this summer’s massive public outcry against police brutality and long-established forms of systemic racism in the U.S., Gellar-Goad, professor Caitlin Hines and other Classics department faculty saw in the national scenario a renewed call for changes in their own discipline as well.

“After what happened this summer in Minnesota and Wisconsin with the murder and shooting of Black civilians by police and the response of anti-racist protests, we decided that we would extended Classics Beyond Whiteness into this year and beyond,” Gellard-Goad said. “If you look at our department profile, all of the faculty members of the Classics department are white and the field of Classics is overwhelmingly white. That is because of longstanding structural inequities and white supremacist affiliations of the field and is something that we are a part of a larger movement within the [Classics] field to fix that in a variety of ways.”

Classics Beyond Whiteness returned this semester with a two-session reading group on Eos Africana Reads for Black Lives focused on the Africana reception of ancient Greek and Roman Classics. The reading sessions, which were also in support of the national Scholars Strike for racial justice on Sept. 8 and 9, were part of a worldwide initiative by the Eos scholar society, offering a new way to engage with Greek and Roman cultures through the lens of Africana while giving prominence to the experience of Black people in the field Classics.

Interested students can still participate in the second group reading session scheduled for Sept. 22 at 3:30 p.m. by reaching out to the Classics department Administrative Assistant Julie Pechanek to be added to their listserv.

The Classics department has also brought in a series of guest scholar speakers such as Dr. Shelly Hailey, one of the leading scholars in Black feminist and critical race approaches to Classics, and Dr. Sinclair Bell, a classical archeologist and art historian, to broaden students perspective on race representations in the Classics. And the early results have been encouraging

“I really do think that looking at the study of Classics through different perspectives is very important especially when considering the various ways in which it has historically been rooted in racist and white supremacist ideals. Changing the way we see Greek/Roman Classics and the way society sees Greek/Roman Classics is very important to form a more inclusive and comfortable environment in our classrooms,” said senior and Classical Studies major Will Lewis. “ I don’t believe I would have the knowledge to take such a strong stance towards the necessity of further inclusion in the discipline and the elimination of its white supremacist roots, if not for the extraordinary educational effort put forth by our Wake Forest Classics faculty.”

Now, the plan in the Classics department is to move the Classics Beyond Whiteness from a short-term exposé of some of the racial issues within the field of Classics to a more permanent feature of its curriculum.

“One of our plans is that when the next opportunity for course revisions [appear] we are going to propose that Classics Beyond Whiteness, as a one-and-a-half credit course, becomes a requirement for majors and minors,” said professor Mary Pendergraft, chair of the Classics department. “We would also like to hire scholars coming from different backgrounds and who have expertise in these kinds of issues.”

Both requests will be subject to approval by Dean of the College Michele Gillespie later in the academic year.

For Gellar-Goad, instituting a requirement class focused on acknowledging and deconstructing some of the white idealizations and troublesome white supremacy ties in the field of Classics would be a first step in making the study of Classics more inclusive and welcoming to students of color.

“[Making Classics more inclusive] is an area where there’s plenty of activism going on in the field right now, trying to bring Classics to more people, not because it’s some sort of savior or exceptionally special. It’s not. But, because we think that some of the benefits that Classics has are ones that everyone should be able to share in,” Gellar-Goad said. “It’s an uphill battle in our field, but one that we feel that we are well-positioned to fight and that we have good allies both at Wake Forest and across the country.”

Much like the Eos moniker, which in ancient Greek mythology referred to the goddess of dawn, represents the ambitious goal of the Eos Africana project in reshaping the understanding of Classics, a new dawn on the study of Classics lies on the horizon for Wake Forest students.