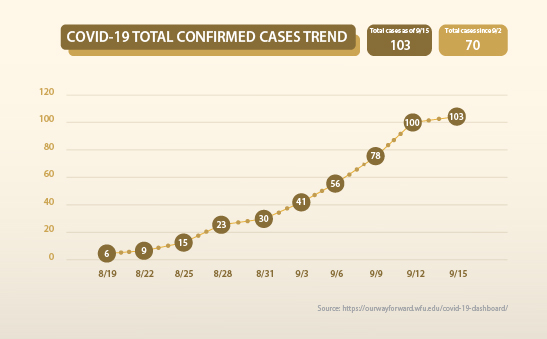 One week ago on Sept. 8, the reported number of positive COVID-19 cases on campus according to the university dashboard was 54. As of Sept. 16, that number has increased to 103, a 90.7% increase in one week. Positive cases are being confirmed at greater numbers and in shorter time frames than at any other time since the beginning of this semester.

A campus health update on Sept. 15 stated, “in recent days, there has been an increase of known, confirmed positive cases in our campus community.”

The update goes on to state that many of the increased cases are asymptomatic, with symptomatic cases being mild and lasting for approximately three days.

Vice President for Campus Life Penny Rue discussed with the Old Gold & Black the recent increase of COVID-19 cases among the university community.

“We are finding that most positive cases arise from small groups of friends gathering, taking off masks, and eating together,” Rue said. “Infectious disease experts predicted this level of increase given our environment. We can continue to keep the virus from transmitting more rapidly by frequent hand washing, strong mask compliance and limiting ourselves to small gatherings.”

It’s critical to consider that the increased number of positive cases follows the launch of Wake Forest’s random testing program. This program, which started during the week of Aug. 31, tests approximately 500 random students weekly with PCR testing. Wake Forest believes that, as more routine testing is conducted, “… it is likely we will continue to see these numbers increase.”

Among the objectives of the surveillance testing program is the ability to effectively address the prevalence of the virus within the Wake Forest community. The Sept. 15 update from the university, which is posted above the dashboard, reported that the positivity rate of the virus “among the asymptomatic student population with no known exposure” identified through random testing is 0.25%. Wake Forest has not reported the total number of positive test results compared to the total number of tests performed. Last week, the university reported an overall 2% positivity rate in the FAQ section below the dashboard. That positivity rate estimate was removed from the FAQ section shortly after it appeared.

Wake Forest is collaborating with BioReference Laboratories to conduct its surveillance testing. On its random testing FAQ page, the university states, “BioReference Laboratories, a nationally recognized lab that specializes in mobile testing, will use a polymerase chain reaction (PCR) test utilizing anterior nares (nasal swab) collection. The swab is taken from the front of the nostril and has been described as the least invasive of the different types of nasal swabs.”

Kayla Sirlin, a sophomore who has already participated in the random testing program, described the test as not terribly invasive.

“It was just barely at the tip of [my] nose … It didn’t feel invasive at all,” Sirlin said.

Sirlin also conveyed that it took approximately a week for her to schedule her test after receiving an email confirming that she had been selected for random testing, a process that might further delay the reflection of live and accurate COVID-19 figures on the dashboard.

The connection between rising case numbers and the color status on campus remains to be determined. Student Health stated in its Sept. 15 update that the color status “… is not determined solely by the number of positive cases but several factors that help explain the prevalence and nature of COVID-19 spread at Wake Forest.”

Rue discussed the circumstances that might cause the Wake Forest campus to shift to the Orange color status.

“From the experience at other campuses, the reasons schools have gone into a more restricted status arise from superspreader events where asymptomatic individuals spread the virus — knowingly or unknowingly — to such a large number of contacts that it becomes impossible to perform contact tracing in a timely manner,” Rue said. “Additionally, running out of space to quarantine exposed students creates a need to become more restrictive. Again, frequent, hand washing, strong mask compliance — inside and outside — and limiting ourselves to small gatherings will help us to stay in the yellow zone.”