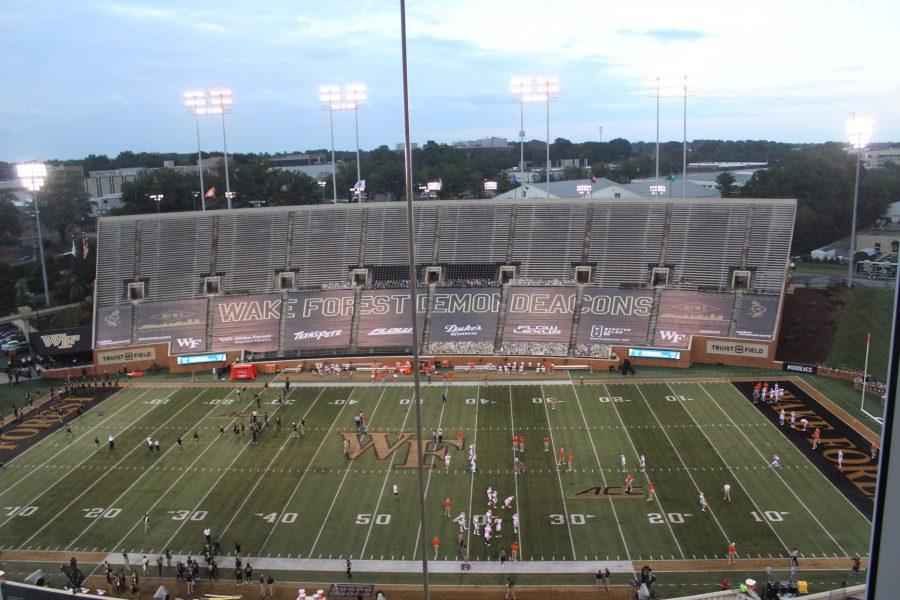 And while 37-13 may not seem encouraging, going up against Clemson so early in the season could be a gem in disguise for Head Coach Dave Clawson and the Demon Deacons if they can use the experience to pin-point and patch-up areas where they came up short.

Although not quite reflected in his stat-line, Hartman played well against Clemson’s rock-solid defense. Hartman went 11-21 for 182 yards before coming out in the second half, handing the ball off to backups Kern and Griffis — the former went 6-for-11 and the latter 2-for-6 (one of such passes being Wake Forest’s only touchdown on the day, caught by Taylor Morin).

Overall, Hartman’s play was reassuring to those who worried about a drop-off following Newman’s transfer during the off-season. Clawson had expressed a noticeable difference in his quarterback’s stature and demeanor coming into this season, and such was reflected in his play despite the consistently heavy pressure provided by Clemson’s front-seven.

“He protected the football and managed the team well,” Clawson said. “He had a decent night, and if all the balls he threw (that should have been caught) were caught, he would have had a great night.”

The head coach was also impressed with the way some of his younger players competed. Defensive-back A.J. William’s (redshirt freshmen) had a career-high 11 stops and recorded his first collegiate interception in the fourth quarter. The pick put Wake Forest in prime field position to score their first touchdown against Clemson since October of 2017.

Redshirt sophomore, Sam Hartman, takes a snap from shotgun during the first quarter of Saturday’s game at Truist Field. Hartman left the game after taking a hit to the head but is expected to start next Saturday (Will Zimmerman/Old Gold & Black)

“That was his best game,” Clawson said of Williams. “He proved he can play a lot of snaps, and not just on special teams.”

Other young defensive-backs such as Peyton Woulard and Zion Keith also stepped up in big ways, providing depth at a position that was once mired with uncertainty. “Every time we get guys like Keith or a Woulard or Williams [out on the field and playing big minutes], that’s a plus-one.” Clawsonsaid.

Many eyes were trained on the Deac’s defensive line, particularly the 2019 all-ACC selection Carlos ‘Boogie’ Basham,  a redshirt senior. Basham’s presence was felt from early on — during Clemson’s very first drive of the game, Basham sacked Lawrence on third down, forcing the Tigers first three-and-out of the night (they only had two more over the course of the game). The sack gave Basham a CFB record (dating back to 2019) of 19 consecutive games with a tackle for a loss.

Also notable were the Deacs’ kickoff and punt coverage units. For the punter and redshirt freshmen, Ivan Mora, the night was a busy one. It was the first appearance for Mora, who picked up right where Dom Maggio left off. Mora’s longest punt was a 59-yarder that landed inside Clemson’s 10-yard-line.

On other fronts, such as in the secondary, the Deacs struggled throughout the majority of the game. Due to contact tracing and injuries, the Deacons were short-handed coming into the game and unable to dress a total of six players in the position group. As a result, many guys without a lot of experience were tasked with defending against what is likely the most lethal quarterback-running back duo in college football.

As Clawson put it, “If you don’t get lined up and communicate against Clemson, good luck.”

Last season, Lawrence led the Tigers to the National Championship, flexing his NFL-caliber arm and expert field vision en route. Improvements to both were on display as he picked apart the Deacs’ secondary, racking up over 350 yards passing. In addition to the touchdown pass he threw to J.C. Chalk, Lawrence used his feet to find the endzone twice — in both instances, faking out Wake Forest’s goal-line defense with the read-option, before trotting into the endzone untouched. It was the kind of calm, cool and collected start expected from Lawrence, whose odds are among the best to win the Heisman Trophy this season.

Etienne had a very impressive showing in his own right, averaging six yards on 17 carries. The running-back’s elusiveness and athleticism were on display as he weaved his way through Wake Forest’s defensive line and into the secondary on numerous occasions.

The Deacs will also need more out of their receiving corps if they hope to compete against strong ACC opponents in coming weeks. While receiver Donovan Greene proved he can help in filling the gap left by Sage Surratt’s departure, collectively the group had too many balls fall through their fingers.

If some of those balls had been caught, and some calls had been made by the officials early in the first half, the story Saturday night may have been a bit different. But, at the end of the day, the Deacs have to be encouraged by their performance against the nation’s top team.

They say the best way to get better is to play the best, and Wake Forest certainly played the best in Clemson. “We’ve got to learn from it,” said Hartman in a post-game press conference over Zoom. What was learned, Deac nation hopes, will be apparent this Saturday night at 8 p.m. when the team travels to Raleigh to take on the NC State Wolfpack.