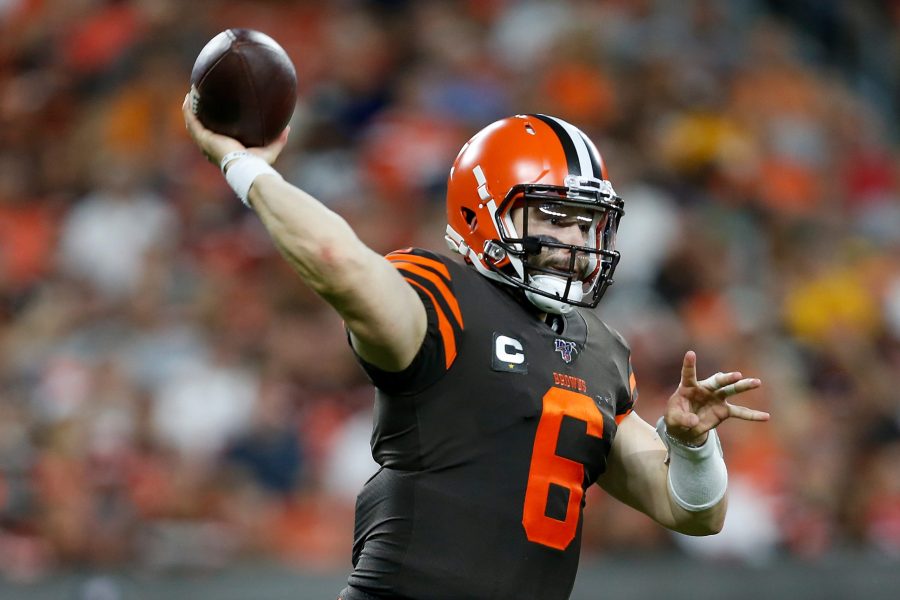 Baker Mayfield #6 of the Cleveland Browns throws a pass during the third quarter of the game against the Los Angeles Rams at FirstEnergy Stadium on Sept. 22, 2019 in Cleveland, Ohio. (Kirk Irwin/Getty Images/TNS)

Now that players and fans alike have gotten over their week one jitters or possible meltdowns, week two provided fan bases with another action packed slate of games.

Sunday’s midday and late afternoon games had some exciting contests and some that likely made fans say, “I’ve seen enough! I’m turning the TV off!” The teams that fell into the “this game was over before it started” category were the usual suspects: the Jets, Giants, and Washington Football Team. On the first play of the Jets-49ers game, 49ers RB Raheem Mostert ripped off an 80-yard TD. The 49ers never looked back, winning 31-13. The Giants lost to the Bears, 13-17, and the Giants also lost their star RB Saquon Barkley for the remainder of the season to an ACL tear. After an exciting second-half comeback against the Eagles in week one, the Washington Football Team came back down to earth, losing 30-15 after being held scoreless in the first half to the Cardinals.

In the Denver Broncos — Pittsburgh Steelers matchup, Broncos QB Drew Lock exited the game early with a throwing-shoulder injury. Meanwhile, Pittsburgh RB, James Connor, overcame his ankle injury to rush for 106 yards, leading the Steelers to a 26-21 win. The Jacksonville Jaguars surprised some with a close contest despite losing to the Titans 33-30. The Miami Dolphins lost a tight game to the Buffalo Bills, 28-31, in a performance that shocked Buffalo’s fearsome defense. The Indianapolis Colts saw their rookie RB, Jonathan Taylor, breakout for his first 100 yard rushing performance as they beat the Minnesota Vikings 28-11.

The first and second overall picks of the 2016 draft, Jared Goff (LA Rams QB) and Carson Wentz (Philadelphia Eagles QB), respectively, had two very different performances as Goff tossed three TDs and Wentz tossed two INTs, leading to a 37-19 Rams victory. Lamar Jackson’s Baltimore Ravens got the best of Deshaun Watson’s Houston Texans in a 33-16 win. Needless to say, Watson is really missing DeAndre Hopkins this season after he was traded away to the Cardinals.

In an NFC North Division matchup, QB Aaron Rodgers threw a pair of touchdowns and RB Aaron Jones had a massive performance with 168 rushing yards as the Green Bay Packers bested the Detroit Lions 42-21.

In an NFC South Division matchup, Tom Brady had one interception, but he looked more like his usual self with 217 yards and a touchdown pass in a 31-17 Tampa Bay Buccaneers’ win over the Carolina Panthers. In the AFC West Division matchup between the LA Chargers and Kansas City Chiefs, LA Chargers rookie quarterback, Justin Herbert showed off his cannon for 311 yards in his NFL debut. However, the reigning Super Bowl Champion Chiefs spoiled Herbert’s first game with a 23-20 overtime win.

Finally, the Dallas Cowboys — Atlanta Falcons game proved to be the most exciting game of the day. After three early fumbles for Dak Prescott & Co., they won 40-39. Fun Fact: The Falcons made the kind of history no team wants. Teams that have scored at least 39 points without any turnovers have gone 444-0 since 1933. With Sunday’s loss, the Falcons snapped that streak.

Sunday night’s primetime matchup featured Cam Newton’s Patriots and the Seattle Seahawks. Seahawks QB Russell Wilson threw an amazing five touchdown passes, and their defense held off the Patriots with a goal-line stand in the final seconds to secure the 35-30 win over the Patriots.

Monday night all eyes turned to the New Orleans Saints and Las Vegas Raiders matchup, which was the first game played in the Raiders, “Death Star,” the nickname for their enormous new complex, known officially as Allegiant Stadium. Though standout RB Alvin Kamara dazzled for the Saints with a two-touchdown performance, the Raiders pulled out a 34-24 victory behind excellent performances from QB Derek Carr and RB Josh Jacobs.