Stanley Cup Finals even at one after Lightning win 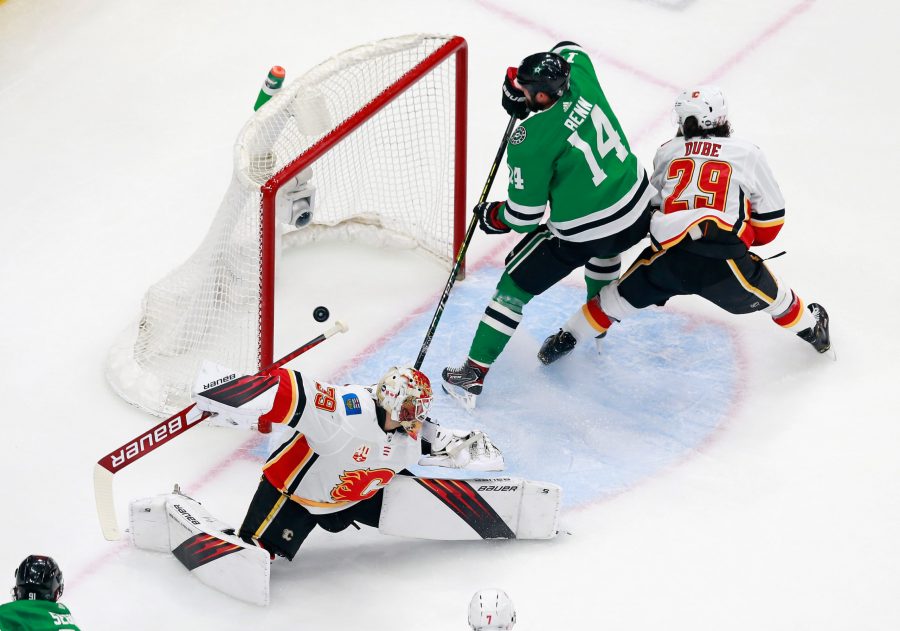 The Dallas Stars' Jamie Benn (14) scores a short-handed goal in the first period against Calgary Flames goaltender Cam Talbot (39) in Game 5 of the Western Conference First Round playoff series at Rogers Place in Edmonton, Canada, on Tuesday, Aug. 18, 2020. The Stars won, 2-1, for a 3-2 series lead. (Jeff Vinnick/Getty Images/TNS)

Finally, the conclusive stage of the Stanley Cup Playoffs is upon us. Two teams remain in the Edmonton bubble, but only one champion will be crowned. For a season unlike any other, which has taken more than a year to complete, the two worthy contenders eyeing the biggest trophy in North American professional sports, Lord Stanley’s Cup, are the Tampa Bay Lightning and the Dallas Stars.

The Lightning have been one of the most dominant NHL teams over the course of the past two seasons, so there was much pressure on the team and head coach Jon Cooper heading into the bubble. Last year, after tying the single season points record, the Lightning fell by way of a first round sweep to the Columbus Blue Jackets in what was one of the most shocking upsets in recent playoff history.

The catalyst for this season’s postseason run has been the Lightning’s incredibly deep offense. The Lightning’s top line, led by former Hart Memorial Trophy winner, Nikita Kucherov, has already racked-up a team high 26 points during the team’s postseason run. With star center Steven Stamkos missing most of the playoffs due to injury, the budding-star, Brayden Point has proved his own worth as a more than capable second-line-center. In fact, Point has been one of the best centers in the league during the postseason, accumulating 25 points to date.

And, with a cavalcade of exciting players up and down the offensive lines including the likes of Ondrej Palat, trade deadline acquisition Blake Coleman, Yanni Gourde, Alex Killorn and Tyler Johnson, the Lightning offense will be incredibly hard for the Stars to slow down.

Defensively, the outstanding blue line has been led by arguably their most important player, Victor Hedman, who leads the team with a plus/minus ratio of plus-17. Other key contributors include Ryan McDonagh, Kevin Shattenkirk and Mikhail Sergachev, who hope to impress the nation as the Tampa team have sneakily been one of the best defensive teams in the league. Reigning star goalie Andrei Vasilevskiy has been up for the Vezina Trophy each of the past three years, making him on the game’s elite goalies. Clearly, head coach Jon Cooper has the pieces to finally earn the title his team has always shown the potential to get.

Out of the Western Conference come the Dallas Stars. Coached by former Tampa Bay Lighting assistant Rick Bowness, the Stars are in the Stanley Cup Finals for the first time since 2000.

The Stars owe much of their post-season success to their strong defensive units as well as the play of their starting goalie, Anton Khudobin. During the Western Conference Finals versus the favored Vegas Golden Knights, Khudobin willed his team into the next round, frustrating the high-powered Golden Knights attack and putting himself in contention for the Conn Smythe trophy (awarded to the most Valuable Player during the playoffs) en-route. Defenseman Miro Heiskanen and his partner John Klingberg deserve some credit too, as they have stood tall in front of Khudobin all season long.

During game one, it was the Stars’ offense that garnered the post-game headlines. The Stars found the back of the net four times, with goals from Joel Hanley, Jamie Oleksiak, Joel Kiviranta and Jason Dickinson propelling the team to a four-to-one victory.

Offensively, the Stars have had a much tougher go then one might expect from a Stanley Cup finalist. While certainly not a push over with forwards like Jamie Benn and the former face of San Jose Sharks, Joe Pavelski, leading the way, the Stars have been more reliant on snapping a few goals into the back of the net and then frustrating the opposing team to the end of the game. While it’s maybe not the most exciting hockey strategy, it gets the job done as the find themselves in a strong position to hold up the cup if they can limit the striking attack of the Lightning.