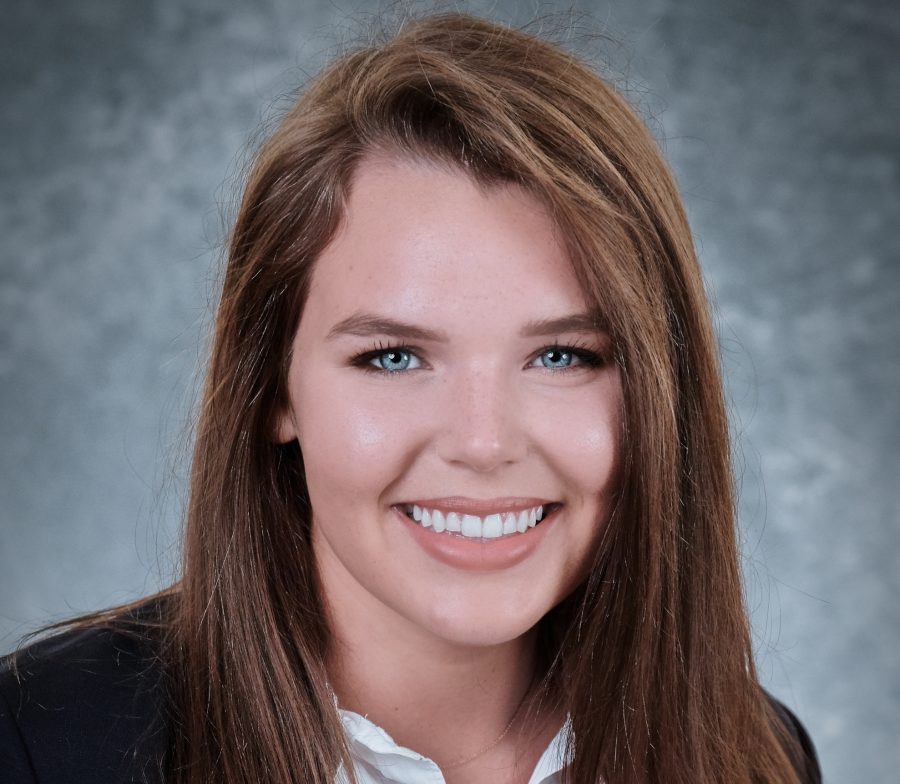 Hannah Cook is a senior finance major from Raleigh, N.C. She is serving as the student senior director for Hit the Bricks in a year when social distancing guidelines make it challenging to hold the relay event in the upper quad as is customary. Cook discussed how Hit the Bricks changed due to COVID-19 and what working on the event has taught her as well as her journey to becoming senior student director of the famous relay.

How did you become involved with Hit the Bricks?

I went to the admitted students day and they had all the tables set up around the Quad with all the different clubs to join and Hit the Bricks was one of the tables. I was confused because they literally had “Hit the Bricks” bricks, like physical bricks, on the table, and I thought that was so weird. So I went up and talked to the girl that was behind the table. Little did I know that in a year I would be in her sorority; she would be a really good friend to me, and then I would go on to take her position in Hit the Bricks. I think that was just a really cool thing to see at Wake Forest — just how much of a tight knit community the school is. Then I joined student government as a freshman once I got to Wake Forest and they created a Hit the Bricks team. It was one the first big events for the Brian Piccolo Cancer Research Fund. So I signed up to run for the team and I didn’t really understand what Hit the Bricks was. I just knew it was raising money for cancer research, and I wanted to participate so I signed up to run. Then sophomore year I ran to be a co-chair. I was PR co-chair my sophomore year, and then junior year I was junior director, and now I’m senior director. It’s been a great experience.

What does your leadership role with Hit The Bricks look like? What are your tasks as senior director?

So as senior director I’m basically the one in charge of all correspondence and all planning of Hit the Bricks. I am in charge of making sure everything runs smoothly. If any issues come up that’s for me to deal with. It’s a lot of emails and weekly meetings with co-chairs. I also work with the Office of Civic and Community Engagement. I deal with all the logistics of everything — the website, event planning, and anything you can think of really.

What will Hit The Bricks look like this year?

Rather than a one day event, it is going to be a four day event. In keeping up with the spirit of Hit the Bricks, we are going to do a running challenge. Beginning on Monday, Sept. 28, at 12 a.m. and lasting until Thursday, Oct. 1, at noon, teams can download the free Strava app and they can track the miles they run. At the end of the week, the team with the most miles will be recognized at the closing ceremony, and will receive a Hit the Bricks brick. The team with the most fundraising throughout the week will also receive a brick. We also have a couple of different events we’re including throughout the week to increase engagement and help people get involved. Monday, Tuesday, and Wednesday night, we will have Quiz the Bricks. We also have Find the Bricks which will be an on-campus and social media scavenger hunt. Another event we have is only on Wednesday and it is Sprint the Bricks. Closing ceremony on Thursday will end us off. It’s going to be livestreamed as we can only have a limited number of attendees there due to COVID-19 guidelines. We are hoping to have student speakers, as well as the chaplain, and President Nathan Hatch. To end it out, we are going to do a socially distant silent lap and a luminary to honor loved ones.

Why did you decide to become senior director of the event? What does Hit The Bricks mean to you?

I was good friends with the senior director when I was a sophomore. She was so on top of it. She already had her life figured out to a certain point. She got the best grades and I just really looked up to her so much. She encouraged me to apply for junior director. When you apply for junior director, you are also accepting the senior director position as well so it is a two year commitment. I’ve always loved event planning. I did it in high school. I also say maybe one day I’ll be an event planner after I figure life out a little bit more. And I love the cause! Like I said, everyone is affected by cancer. I couldn’t think of a better event to plan. I’ve had a great team and they are great to work with. Everyone is willing to do whatever needs to get done. That’s been the best part — realizing that everyone is willing to do their part.

What have you learned from being senior director?

I’ve learned a lot. It’s easy to get caught up in the details of the event planning, the emailing back and forth, and the meetings, but at the end of the day I remind myself that everything I’m doing and everything my team is doing is supporting cancer research. In the end, we’re making a difference in people’s lives. For myself and for a lot of the other people who worked to plan this, they are closely affected by cancer — whether it’s themselves, their parents, or their grandparents, or a friend. We constantly remind ourselves of what we’re doing. Brian Piccolo died at the age of 26 of cancer. It’s crazy stuff that is unfortunately super prevalent. I think I’ve learned that you can work yourself to death with planning and making sure everything is perfect, but at the end of the day, people want to support the cause because everyone is so closely affected by it. I’ve also learned how to be a better communicator and how to make sure I’m leading in a way so that people do not feel like I’m loading them up with work. I want to lead in a way that makes people want to ask for more and makes them want to ask ‘What can I do?

Hit the Bricks will take place from Monday, Sept. 28 to Thursday, Oct. 1.