Preventable fires rip through the west 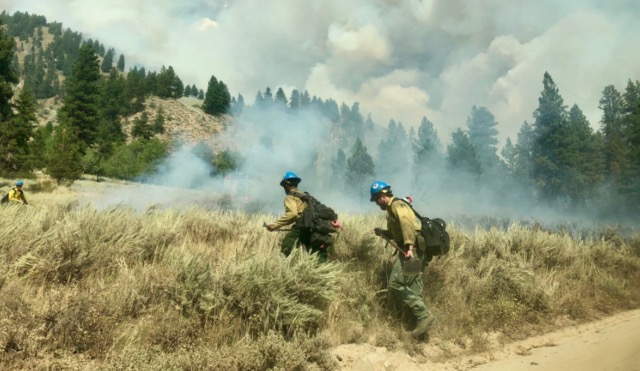 According to The Guardian, a gender reveal party on the morning of Sept. 5 in El Dorado Ranch Park sparked a massive wildfire, spanning over 10,000 acres. It necessitated hundreds of first responders, and tragically resulted in the death of one firefighter.

Sadly, that fire is not unique. There are currently dozens of rapidly expanding fires threatening millions throughout the West coast.

Not all of the wildfires were caused by gender reveal parties, though. Many are started by tress knocking over powerlines, dry lightening storms and power transmission lines.

The fires have swept over tens of thousands of acres across Washington, Oregon and California, forcing the evacuation of 500,000 residents in Oregon alone.

So far, 35 people have been killed with many more missing. Another few thousands ended up in temporary housing with no end in sight.

The demands of these unprecedented fires have left a shortage of firefighters. Willing to step in and lend a helping hand, however, are thousands of state inmates. They can earn between $2.90 and $5.12 per day and potentially a reduced sentence in exchange for their heroic efforts.

Despite their vital role in helping limit the spread of these devastating fires, many of them are unable to find employment after their release from prison despite firefighting.

There are several pieces of legislation working to correct these discrepancies, but it is heavily debated whether these laws will address the true underlying issues with incarceration.

Although there are countless first responders working tirelessly to control these wildfires, the effects rage on. The air quality there is now ranked among the worst in the world.

A recent Stanford University study suggests the inhalation of wildfire smoke is damaging above and beyond deficient air quality. Many people are now suffering from the impact of smoke intake, triggering distressing cardiac and respiratory reactions like asthma attacks. There have even been links to weakened immune systems, depression, heart attacks and strokes.

Another ever-present effect of climate crises are their impacts on environmental injustice. Sadly, once again a natural disaster re-emphasizes the glaring economic disparity: it is healthier to be wealthier.

Backup generators and air purifiers are expensive and in high demand, preventing many from obtaining any sort of relief. It is even more costly for people to flee their homes and go to a (relatively) unaffected area, trapping thousands in their now dangerous environments.

The effects of the wildfires aren’t just seen on the West coast, however. The East Coast is feeling its influence too, as the smoke’s interference with the jet stream reaches 20-25,000 feet in the atmosphere. The jet stream directs the weather pattern, thus carrying the smoke east. The smoke can travel as far as the East coast of the United States, causing overcast skies and haze.

As if there weren’t enough reasons to take climate change seriously, here is one more.

Many of these fires are preventable, whether by restricting gender reveal parties, paying attention to local fire ordinances or working to fight climate change.