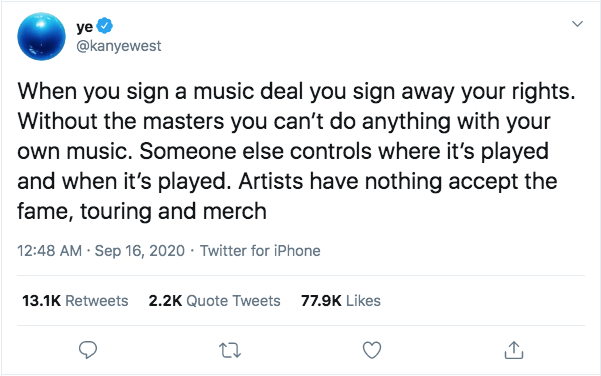 On Sept. 14, Kanye West tweeted, “I’m not putting no more music out till I’m done with my contract with Sony and Universal,” and what proceeded to follow for the next 10 days was a string of trending tweets, contract voids and a rush of communication with the music industry’s top executives from partners like Viventi, Bollore and Universal Music Group in a declaration of war for the master recordings of his music. West, known aside from his legendary career as a rapper, producer and fashion designer as a controversial public figure, never lets the foot off the brake in makingsure everyone is listening when he has something to say. He let the world know that Sony and Universal were not allowing him to acquire or purchase back the master recordings to his music, and through his personal struggle gaining his own rights back, he has started a push for change in the industry to allow all artists to have transparency in their contracts and gain their own masters back.

Many of West’s early tweets did not gain much traction due to their confusing nature, but the peak of the attention came when West uploaded a video of himself urinating on one of his 21 Grammy Awards, a tweet that has gained over 750,000 likes and nearly 30,000,000 views on the platform. He also breached all 10 of his existing contracts by leaking them page by page over nearly 100 tweets. This sounds crazy and abnormal; however, due to West’s position as a well-respected icon, billionaire company owner and a part of the lineage of artists taking their legal battles public, these cries for freedom from his contracts might not seem that odd.

The fight for music rights, masters and publishing is one that a majority of music fans are unaware of. It’s a complicated business that ultimately comes down to the licensing of music by publishers to stores, company commercials and usages in TV Shows, movies and trailers. Every time you hear your favorite song at one of these places, someone is paying for it. Not only that, but the artists themselves are rarely the ones profiting. Why? Because in many cases when an artist signs a contract, they are signing off the rights to their music as a means of getting more money upfront through contract advances and the royalties off of physical, digital and streaming sales. Ever since the dawn of the pop music industry, artists have been taken advantage of by these major labels and publishers. Many, artists are not originally educated in music business or law, may not have the best lawyers and are unaware of what exactly they are signing off on, which allows anyone to easily slide in a critical mandate in the fine print hidden in the middle of a contract.

Explaining away West’s manic behavior would be easier if he kept his bold opinions to politics. Extreme actions like contract leaks and urinating on Grammy Awardsdemonstrate that West is taking this issue seriously. Universal has reasons to sue him for tons of money, major award shows are likely to blacklist him for disrespect, and he is likely in the midst of making his lawyer’s life much harder, but none of that matters to West. If it takes that to educate millions of fans about the cause and draw public attention to the actions of his record label, then it was worth it. It’s clear West hopes that the next generation of artists does not to have to fight the same battles. His situation isn’t the only in history, and the fact that this keeps happening to musicians is surely a sign that something must change, even if it takes radical action. 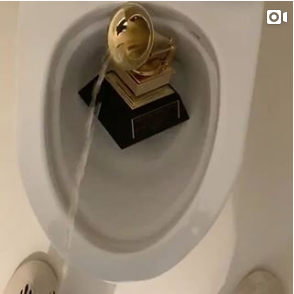 Notable fights for music masters include the late Prince, who was a stepping stone to the privileged position West is in currently. The iconic star spent years battling Warner Bros Publishing, going as far as to change his name to an unpronounceable symbol representing “love” and writing the word “slave” on his face as a showcase of the injustices he faced in gaining his rights back. Throughout all of this, Prince also advocated for other artists, only to fall on deaf ears without the support of his peers.

More recently, pop star manager Scooter Braun, who manages major acts like Justin Bieber and Ariana Grande, assisted in the purchase of Big Machine Label Group for $300M, a company that owns the masters for Taylor Swift’s music. Despite her push to buy back her recordings, she was ultimately denied, and in order to gain some ownership back she would have to re-record the entirety of her catalog as brand new releases.

West has a point, primarily because of his unionized approach to the cause. If all artists could work together rather than fight these battles individually, they’d be much better off. Interestingly enough, West might be the only person capable of leading this movement, given his charisma, notability and drive. Even through his outbursts, he has continued to draw interest from top executives at these companies for phone calls and meetings, as well as seemingly avoiding repercussions for his actions. He’s already wealthy enough to force a purchase back for his rights in court, so he has nothing to lose. So far, West has shown progress by announcing his work alongside Vivendi to create a Y Combinator for the music industry, which would force contract transparency and guarantee signees know exactly what goes where. This strategy was developed and used successfully at companies like AirBnb and Dropbox. For the first time in awhile, West’s wild side has been led with direction and hopefully more progress will be made.