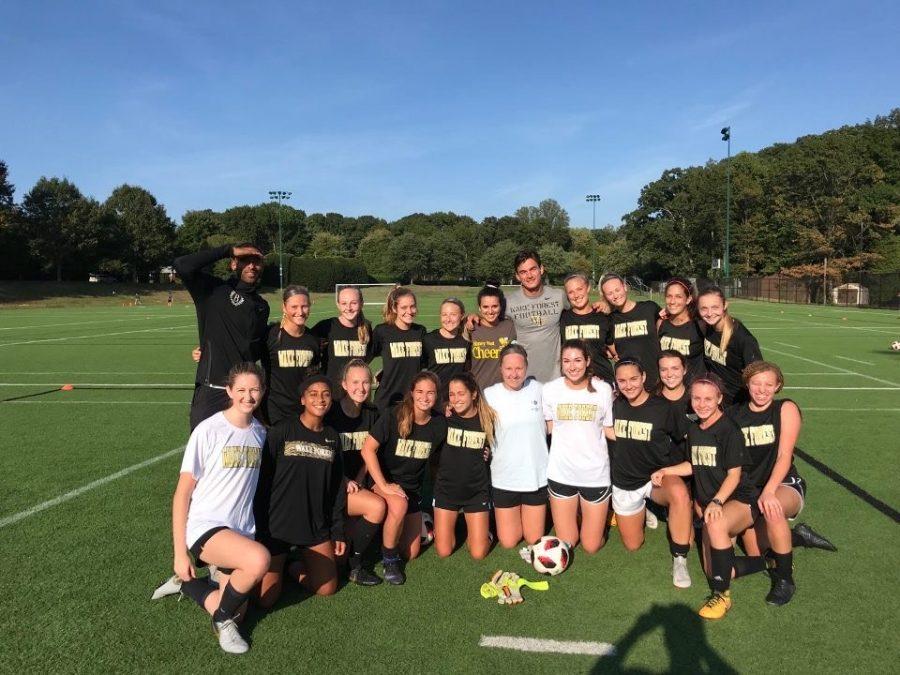 Wake Forest’s Women’s Club Soccer team will look a lot different this year in light of the COVID-19 pandemic; however, the team will still be on the field, if not in a traditional sense, according to junior Nicolette Robinson, one of the team’s captains.

Due to the fact that a traditional game of soccer involves physical closeness (one cannot steal a ball from 10 feet away, for example), the team has decided to forego all scrimmage matches. Inter-team play was effectively halted by the university’s travel policy, which prohibits club teams from travelling for inter-school games, and the team will not hold any intrasquad matches, either.

“We had to submit a practice proposal to get approved, and the proposal included drills that followed COVID guidelines … we have to do 10 feet apart, wearing masks at all times and with proper cleaning procedures, which for us just means wiping down the balls.”

According to Robinson, the number of people on the team who wanted to play this year (even without scrimmage matches) was the determining factor in the decision to play.

“We asked everyone if they’d feel comfortable playing without scrimmaging, of course, and [following] COVID guidelines, and everyone said they wanted to. So the participation and enthusiasm from our current teammates was basically the driving force to keep us going and keep us playing,” Robinson said.

The team held tryouts  in three rounds over three different days: Monday, Sept. 14, Wednesday, Sept. 16 and this past Monday. Overall, Robinson found that the interest level has stayed the same since pre-pandemic.

“We had about 40 people try out, and last week, we had about 50 people sign up, but only 40 people actually showed up,” Robinson said.

During practices, the team will do various soccer drills, like shooting-on-a-turn drills and conga line drills (which involve dribbling through cones at fast paces). This will help keep players conditioned and improve the team’s skill for when they can once again play against other club teams in the area.

“We’re really planning on … doing more individualized training and technical drills that work on footwork [and passing], drills that include shooting … as well as conditioning, which is something that we usually don’t include too much because even though we are competitive, we try to make it a little bit more fun,” Robinson said. “But a lot of the girls really agreed about wanting to improve before next season.”

According to Robinson, due to the size of the field on which the team practices, there is no need to limit attendance at practices, meaning the entire roster of about 30 players will be able to practice at the same time.

On Sundays, Robinson and her co-captains plan to hold more fun practices that are geared toward player enjoyment and socialization than skill development.

“[We’ll] kind of have a Sunday just to get together and pass the ball around and make it a little bit more leisurely and fun,” Robinson said. “It will take the place of what we normally do on Sunday…we play games [as in matches] on Sunday mornings.”