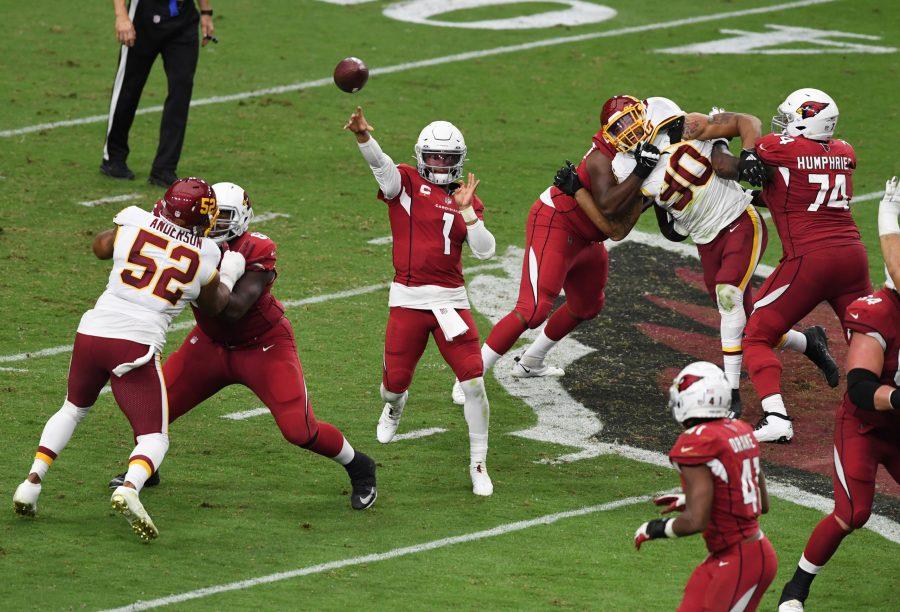 Kyler Murray #1 of the Arizona Cardinals throws the ball down field against the Washington Football Team during the fourth quarter at State Farm Stadium on Sept. 20, 2020 in Glendale, Arizona. Cardinals won 30-15. (Norm Hall/Getty Images/TNS)

Editors note: All points and statistics are PPR League scoring

The stories from Week Two:

Week two was the week of the young quarterback. Joe Burrow backed up a solid Week one debut with a stellar second act against the Browns on Thursday night, picking Cleveland apart to the tune of 316 yards and three passing touchdowns, which translated to 24.54 fantasy points.

Josh Allen turned in one of the week’s best performances, tossing four touchdowns and 417 yards for 34.48 points.

Dak Prescott had one of the most surprising performances of the week, hovering in negative figures for much of the first quarter before turning on the gas in the second half, ending the game with 39.8 points.

Kyler Murray had a great week as a runner, scampering for two touchdowns and 32.14 points.

In terms of non QBs, Leonard Fournette appears to have found his footing in Tampa Bay, scoring two touchdowns on 116 total yards for 27.6 points. Aaron Jones also had a fantastic week, finding the end zone four times, amassing 45.6 points against the Detroit Lions.

My sincere condolences go out to any team starring Saquon Barkley or Christian McCaffrey. Accordingly, make sure to look at backup running backs in situations where starters have picked up injuries (I like Tarik Cohen in Chicago, Dion Lewis in New York, and Jerick McKinnon in San Francisco.)

Looking ahead to Week Three

If you didn’t know already, this kid is for real. Murray has averaged 29.22 fantasy points over two weeks, putting him well within the Top 10 of NFL QB’s. He’s set to face a horrendous Detroit defense in Week three. Plan accordingly.

I know this may come across as controversial, but after a tough week against a modest LA Chargers defense, Mahomes and the Chiefs have to play the best defense in the league, the Baltimore Ravens. He may not play terribly, but I expect Baltimore to hold Mahomes to less than fantasy owners are used to.

As mentioned above, Chubb had a spectacular outing in Week two against the Bengals. In Week three, he goes up against another weak run defense in the Washington Football Team. Expect him to get a lot of touches, and for the Cleveland offense to be dominant on Sunday.

After an impressive debut in Week one, Edwards Helaire did little to satiate fantasy team owners in Week two, only rushing for 38 yards. As with Mahomes, Edwards Helaire goes up against a much better run defense in Week three. The Baltimore defensive line is stout, and unless he picks up valuable goal line touches where points are more abundant, I expect Edwards Helaire to repeat his lackluster Week two performance.

Having Kyler Murray as your quarterback and facing the Detroit Lions is a sign of impending success for Hopkins. He’s also averaged 24.95 points through two weeks, which certainly doesn’t hurt.

The Bengals receiver draws a very tough assignment against lock-down Eagles corner Darrius Slay. He held Terry McLaurin to minimal points in Week one and can consistently stymie a No. 1 wideout. Expect Slay to do the same against Green.