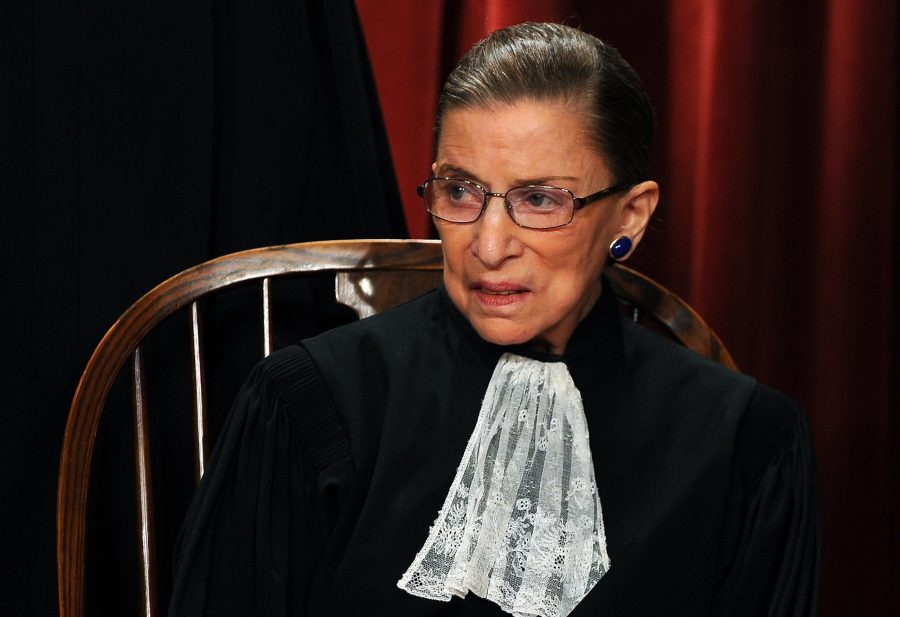 Ruth Bader Ginsberg sits with fellow Supreme Court Justices of the United States for a formal group photo in 2010. Bader Ginsburg broke three ribs in a fall Wednesday at her office and is recovering in the hospital. (Roger L. Wollenberg/Abaca Press/TNS)

I was driving in the car with my friend blasting music and laughing. We were jolted out of our euphoria at 7:45 p.m. on Friday when the notification came. We drove in silence for the next 15 minutes then pulled up to Davis Residence Hall to spread the news. Me and another girl waited outside my door to tell my roommate who was taking an accounting test. The second she opened the door and saw us, her face fell and could tell something terrible had happened. We told her and after the shock had passed we all hugged each other, crying. Ruth Bader Ginsburg, our Notorious RBG, had passed and we would remember the 18th night of September forever.

It was not simply the passing of an icon and hero, but the end of our protection at the Supreme Court level, and every woman around me knew it. For her entire career on the court, RBG never left the women of America’s corner and fought tirelessly to ensure that women were safe and supported. With her passing the realization hit that there was one less person behind us and our perspectives shifted overnight.

RBG had been iconicized by women everywhere and looked to her as a sign of hope and perseverance. We watched On the Basis of Sex and the documentary RBG and were in awe of all that she had accomplished. However, what made her even more amazing, was the fact that she was still an imperative fighter for women and women’s rights.

With Ginsburg gone from the Supreme Court, the already overwhelming polarization of our government has increased. Senate Majority Leader Mitch McConnel and President Donald Trump have made it abundantly clear that their goal is to try and replace her seat as fast as possible, ensuring that the Senate remains under Republican control. The timing of her passing and the fear that not only could her seat be filled with a conservative fighting against women’s rights, but the thought that we might endure another four years of Trump is too much and has woken many people up from blissful unawareness.

If women weren’t awake before, they are now. It’s become even more evident that we are now all fighting for our rights in this coming election. The stakes are extremely high in these coming months and we cannot afford to sit idly by. Roe v Wade is constantly threatened and now with no more Super Diva RBG, girls everywhere have been awakened to the horror that would ensue if their worst thoughts came true and it was finally overturned.

Lawmakers and states have been slowly testing the waters on how close they can get to tampering with women’s health rights. Conservative courts in many states have been slowly chipping away at abortion laws and creating more restrictions. Especially now that Planned Parenthood has stopped receiving Title X funding, it has never been harder for women to be in control of their own bodies. If Trump is able to replace Ginsburg’s seat before the election, this will unfortunately continue to worsen.

It was not simply the passing of an icon and hero, but the end of our protection at the Supreme Court level”

Now that Trump has been backed by Senator Mitt Romney who has stated that he does not intend to block whoever Trump nominates for the Supreme Court, the path has been cleared and we can only wait to see if and who Trump will nominate. To many, it feels as if this is the final nail in the coffin that is women’s rights, which still had so far to go. With the threat of a new conservative nominee, and the senate under Republican control, the jokes that girls are going to enjoy their rights while they still can are beginning to seem a little more real each day.

So while we may feel helpless as those above us plot to secure a new Supreme Court nominee before election day, there is one thing that RBG’s passing has given us: a new motivation to do our part in the coming election. One can only hope that her passing has lit a fire within women everywhere, reminded them of the fragility of their rights and most importantly, reminded everyone how important their voice and their vote will be in November.