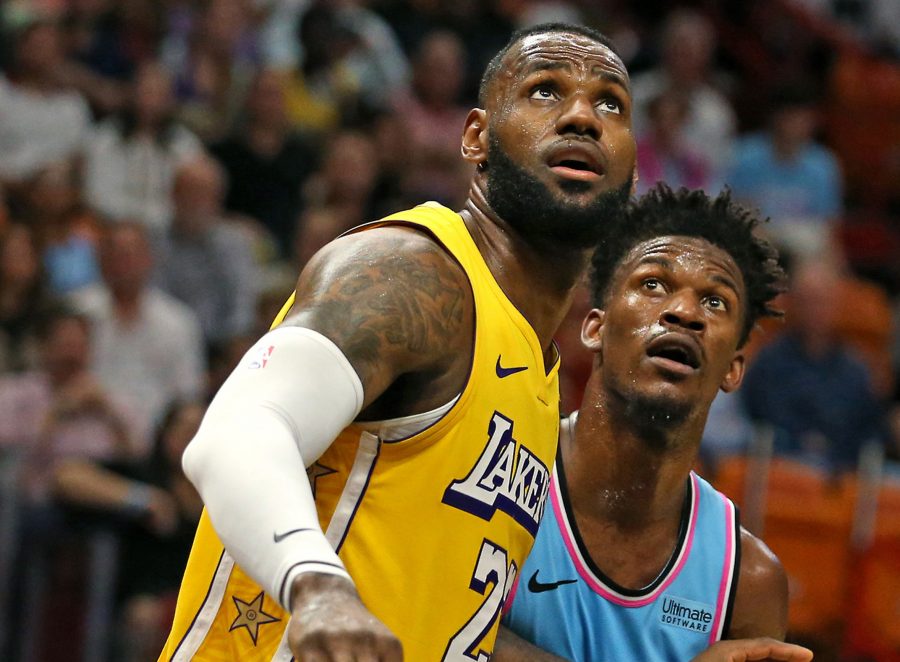 The Los Angeles Lakers' LeBron James, left, jostles for position under the basket with the Miami Heat's Jimmy Butler (22) in the second quarter at the AmericanAirlines Arena in Miami on Friday, Dec. 13, 2019. (David Santiago/Miami Herald/TNS)

At long last, after months of uncertainty, upsets and playoff heroics, the stage has finally been set for what will undoubtedly be the most unique NBA Finals in the history of the sport. The Los Angeles Lakers are set to square off against a gritty Miami Heat squad, which has turned just about every head in the league en route to a shocking Finals appearance. Certainly, there’s a lot to unpack here, but first I’ll provide a recap of how the Eastern and Western Conference Finals finished up.

In an outcome few predicted, the Heat were relatively dominant in this series, dispatching the Celtics with ease. Miami showed their completeness as a team, relying on a mix of savvy veterans and gifted young talent to take the team across the finish line. Heat Head Coach Erik Spoelstra coached circles around Celtics Head Coach Brad Stevens, mixing it up defensively with a few different zones the Celtics could never quite figure out. While the Celtics often sputtered near the fourth, the Heat seemed to roar to life, with several players rising to the occasion when winning time rolled around. For example, rookie Tyler Herro scorched Boston for a cool 37 points off the bench in game four of the series, and young center Bam Adebayo dropped 32 to help ice the series in game six. Perhaps most important, however, has been the gritty, consistent play of Jimmy Butler, who scored 17 or more points in five of the series’ six games.

After two miraculous comebacks and a slew of mind-boggling plays, the Denver Nuggets’ Cinderella run has finally come to an end. Despite the superstar-caliber play from Nuggets guard Jamal Murray, the utter dominance of Lakers stars James and Davis proved too imposing for a relatively young and inexperienced Nuggets Team. The games were, for the most part, closely-contested, but with LeBron and AD averaging roughly 27 and 29 ppg respectively in the postseason, the Nuggets defense simply couldn’t find the answers. LeBron has also chipped in nearly nine assists per game in the playoffs this year, and any team in the league would be hard pressed to defend an offensive threat of that caliber.

The squad has been led all season long by Jimmy Butler, a feisty two-way player who always seems to come alive when it matters most. Butler’s numbers this season have been as solid as they come, with averages of almost 20 points, seven rebounds and six assists up to this point. Also crucial to the team’s success have been young stars Herro and Adebayo, who have shown incredible poise in big moments at such early stages in their careers. Perhaps the most impressive aspect of this Heat team has been their completeness; they are a chain with few weak links, and it’s not all that shocking they’ve made such a deep playoff run. SG Herro and G Duncan Robinson can shoot the lights out from behind the arc, SG Butler and C Adebayo have proven themselves stalwart defenders, and PG Goran Dragic has been a catalyst offensively, both scoring and facilitating with deadly efficiency. Their key to victory in the Finals is obvious: figure out a way to contain James and Davis.

As I’ve mentioned before, the Lakers are a two-headed monster whose success has been the direct result of the play of superstars James and Davis. James, averaging 25 points and a personal best 10 assists in year 17 of his career, has officially entered championship mode, as he sent the Nuggets packing with a 38-point triple double in the final game of the Western Conference Finals. Likewise, Davis’s play has transcended as of late, and there’s no better evidence than the absurd fadeaway 3-pointer he drilled to win game two against the Nuggets. Production from these two in the finals is a given; what remains to be seen is how the Lakers’ role players will respond on basketball’s biggest stage. Danny Green’s performance from behind the arc could be a deciding factor, as could Dwight Howard’s ability to provide quality minutes off the bench. All in all, LA’s matchup with Miami will be an intriguing one, sure to provide plenty of entertaining content for basketball fans nationwide.