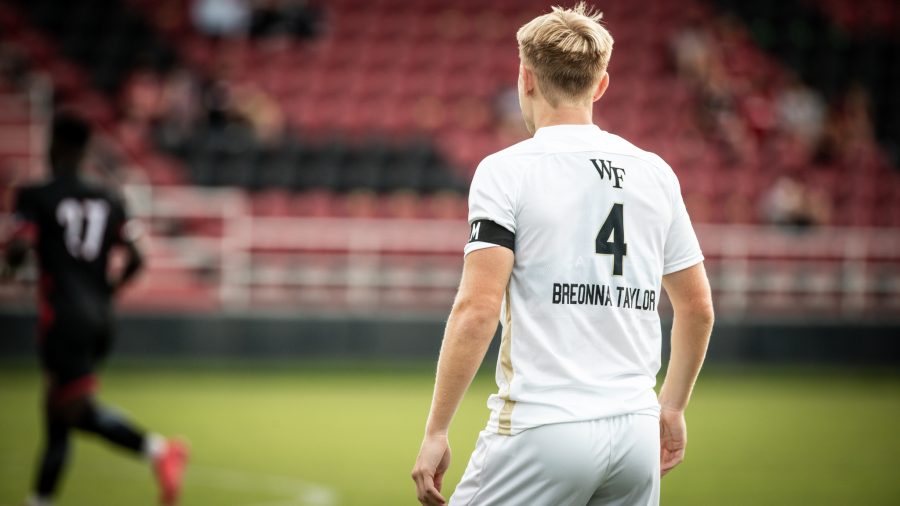 Well, that was fast. The Wake Forest Men’s Soccer team, the preseason number one team in the country, wasted no time getting on the scoreboard in their first game of the regular season. After scoring in the first five minutes, the Demon Deacons cruised to a 3-1 victory over conference-rival Louisville.

The game took place in Louisville, which has seen protests in recent days following the lack of charges brought against officers in the Breonna Taylor case. Prior to the match starting, both teams and the referees took a knee in the centre circle of the field as a symbol of unity. Additionally, Wake Forest had Taylor’s name on the back of their jerseys.

Wake Forest came into the season-opener as the clear-cut favorite, despite missing key players in senior midfielder/forward Justin McMaster, junior midfielder Aristotle Zarris and redshirt senior defender Michael DeShields. The injuries did not factor to be a major problem, as the Demon Deacons took advantage of their deep bench and were able to give a lot of minutes to freshmen like Hosei Kijima, Garrison Tubbs, Jahlane Forbes and Cristian Escribano.

Right before the game hit the five minute mark, senior Machop Chol scored the first goal of the season for the Deacs after a deft series of passes set up his brilliant shot. After a Louisville player deflected a pass outside the 18-yard box, sophomore Calvin Harris took advantage of a good bounce and made a brilliant one touch pass to Chol who was cutting behind the defense. Chol then met the ball, and in one fluid motion, hit a hard shot with his left foot that sailed into the opposite corner of the net to give Wake Forest the early 1-0 lead.

The Deacs’ high powered offense scored again with 10:15 remaining in the first half with a goal from Harris. A member of the All-ACC freshman team last season, Harris found space in the final third of the field, then dribbled past a few defenders. Finally, just as he entered the box, he fired off a shot that bent away from the diving goalie to double the Wake Forest lead.

The defense played very well in the first half. The starting back line of junior Holland Rula, freshman Garrison Tubbs, sophomore Nico Benalcazar and freshman Hosei Kijima cleared a number of Louisville’s counterattacks and kept pressure away from the Wake Forest net.

There was a defensive lapse though to start the second half. Just two minutes in, Louisville had a set piece several yards outside the 18-yard box. Forward Haji Abdikar crossed the ball into the box and found an open Pedro Fonseca, who headed the ball into the net to half the Wake Forest lead.

The Deacs responded quickly. Four minutes later, with 39:10 remaining in the game, forward Kyle Holcomb (junior) was taken down in the box when he was dribbling between two defenders. Louisville’s Lamine Conte was given a yellow card for the overly-aggressive tackle and Wake Forest was awarded a penalty shot. Holcomb took the shot, which he fired into the right half of the net while the goalie dove left to make the lead 3-1.

Louisville started to apply a lot of pressure in the last 20 minutes of the match, but the Deacons’ defense held strong and closed out the 3-1 victory. Wake Forest goalie Andrew Pannenberg, a redshirt junior, finished the game with two saves.

Overall, Wake Forest maintained possession for 57% of the game while 63% of the match took place on the Louisville half of the field. Indeed, the Deacs set the terms for the majority of the match.