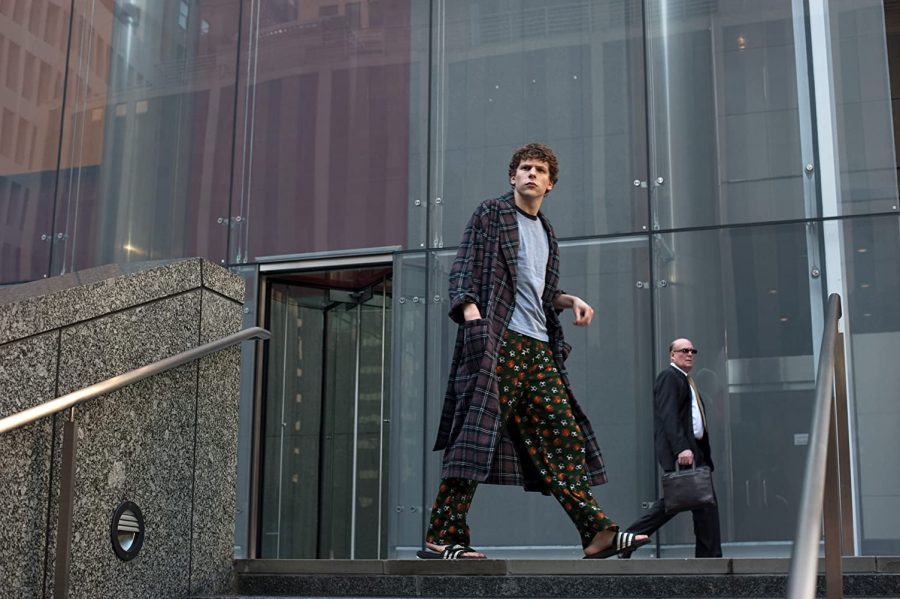 Before Mark Zuckerberg was Mark Zuckerberg, he was just your average college asshole, at least according to David Fincher. The telling of The Social Network focuses on a college Zuckerberg’s rise to power while creating one of the more influential and revolutionary websites and companies of the 21st century. The film is partially fictionalized, like most Hollywood movies “based on a true story,” as Eduardo Saverin’s role as co-founder is played up while Dustin Moskovitz’s contributions are downplayed so that the film can solely focus on the relationship between Mark and Eduardo.  The dynamic between the two friends propels the movie forward, which makes it all the more heartbreaking when Mark finds himself completely friendless at the end of the movie. The roles of Mark and Eduardo are played excellently by Jessie Eisenberg and Andrew Garfield respectively, and the film wouldn’t work if their friendship felt fake. However, one of the more interesting facets of the movie is what went on behind the scenes leading up to Facebook’s inception.

Back in 2010, when Facebook had about 500 million users, compared to the over a billion users it has now, many film critics were rightfully skeptical about a “Facebook movie.” Although the site had a substantial user base, critics found it odd that this would be the next David Fincher project. The director of Fight Club, Se7en and Zodiac was really about to make a movie about Facebook. For reference, just try and imagine what people would say if Denis Villeneuve decided to follow up Arrival and Dune with a movie about TikTok. It was a decision out of left field, but having Aaron Sorkin’s name attached to the screenplay made it a more palatable decision.  The guy who wrote The West Wing and A Few Good Men would certainly bring some expertise to the film. Sorkin was drawn to the idea of the movie, not because of the “rise to success” story that’s been played out, but because of the drama suspending the interpersonal relationships of the founder of Facebook. It seemed that although Zuckerberg creates a website to help people connect, he himself cannot connect with anyone.  Sorkin exploited this idea and wrote a film about an arrogant Harvard kid that’s always the smartest in the room and knows it. Sorkin’s trademark fast and witty dialogue was perfect for Mark Zuckerberg within this fictionalized account. The other characters in the movie struggle to keep up with the speed at which Mark talks and processes information.  Fincher’s dry precision (which is what his harshest critics would ascribe to his filmmaking) combined with Sorkin’s penchant to be over-wordy with his quick and snappy dialogue could’ve been a train wreck, but somehow it managed to be one of the greatest films of the decade. 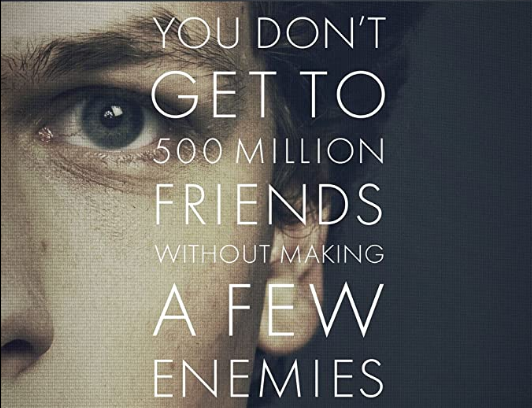 Jessie Eisenberg leads the star-studded cast for the Oscar-winning film about Mark Zuckerberg and the rise of Facebook. As the film turns 10, we can reflect on the growth of the social network (Photos courtesy of imdb.com)

A perfect example of The Social Network’s excellence comes in its very first scene. The film opens with studio credits, and Mark Zuckerberg is already talking over them. He is controlling the conversation with his girlfriend at the time, Erica Albright. He’s pitching 100 mph fastballs and she’s a Little League catcher. Mark is whipping around from genius IQs in China to SATs to rowing, and she’s struggling to keep up with his train of thought. He’s clearly off in his own world, obsessed with making one of Harvard’s exclusive finals clubs and taking occasional shots at Erica’s promiscuity and intelligence.  Erica, being a rational person, decides that she’s done with the relationship. On the walk back from the campus bar, Trent Reznor’s and Atticus Ross’s ominously melancholic score kicks in and the title credits roll. All of this information is densely packed in because this whole scene is only five and a half minutes long but is almost eight pages of a screenplay. For a normal film, a page of a screenplay should equate to about a minute of the film. Not only does Fincher crisply condense this one scene, but the entire script is 164 pages long, while the runtime of the movie is 120 minutes with credits. Sorkin can be a little self-indulgent, and in the worst-case scenario, you end up with a movie like Molly’s Game, which over-explains everything and has way too much voice-over narration. This witty screenplay by Sorkin matched by the precise directing of Fincher gave birth to a film that was the best version of what it could be.

The Social Network is a perfect storm. It’s a movie that was ahead of the curve in its take on Mark Zuckerberg as a pretty successful nerd trying to be an asshole. If the film had came out a couple of years later, it would have lost part of its impact because of what we now know about Zuckerberg.  The Social Network is great after a first watch, but there’s an interesting secondary context that the film can be viewed through. Movies in the vein of The Social Network normally aren’t rich sources for sequel material; they’ve already told the story they need to tell. But I do think it would be interesting to revisit now, or even a decade from now how Facebook evolved from being a Harvard Connect “copy” to one of the largest American companies.