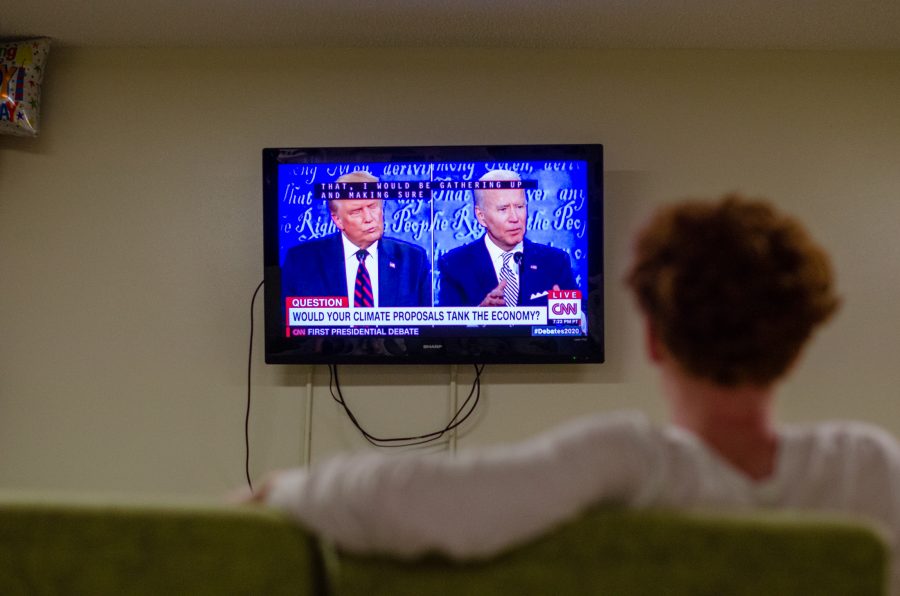 If you have access to a television, a computer or even an annoying suitemate who cannot for the life of them stop talking about every political podcast under the sun, chances are, you were well aware of the first presidential debate that was held in Cleveland, Ohio on Tuesday night. And if you are the aforementioned suitemate, chances are you sat down and watched the debate in its entirety. And to you, I say bless your soul.

But, believe it or not, I tuned in to all 90-minutes of that ear-piercing debate as well. A weekly Op-Ed writer … watching a political spectacle unfold? How surprising and definitely not fitting at all! All jokes aside, the debate was, for lack of a better word, painful to watch. With President Donald Trump, former Vice President Joe Biden and moderator Chris Wallace yelling over each other like children vying for their turn with the Wii-remote, no true discussions about policy were had. Shocker. This should not come as a surprise. Trump is not exactly known for his policy ideas. In the 2016 election, his brazen — and inherently racist and sexist — promises to “build a wall” and “lock Hillary up” were met with uproarious support from his voter base. But these are not policy proposals. They are spineless and inflammatory pieces of propaganda.

While the content of Trump’s baseless claims changed themes in this election cycle, the tone behind them did not. Referring to the novel coronavirus as “The Chinese Plague” and making multiple tasteless jabs at Biden’s son, Hunter Biden, for being a former drug-addict, Trump did not hold back. Now, I am not a political campaign strategist, but whoever advised Trump to act like himself onstage deserves to be fired. One, because the things he said were cruel and unpresidential and two, because who in the world is he trying to win over?

The remarks that Trump made are much more serious than the potential impact they hold on undecided voters.”

If what the polls are saying is true and suburban housewives make up one of the groups that should be targeted and won over by each candidate, how does an aggressive, condescending, violent attack on one’s opponent come across? Something tells me that trying to pin moderate Biden as a radical leftist and ridiculing his personal life will not get you invited to Brenda’s bridge club. And failing to condemn white supremacists because they make up a portion of your voter base? Oop! There goes your invitation to Linda’s garden party. The remarks that Trump made are much more serious than the potential impact they hold on undecided voters. They are fear-inducing and, more dangerously, completely false. Because this column is not large enough to contain the extensive list of aspects I found wrong with Tuesday night’s debate, let us focus on one key detail that led the pack: the obvious lack of control.

Wallace was unable to hold, let alone steer, the reigns of the first presidential debate. The combination of deflecting questions and yelling over one another gave me mental whiplash from nine hours away, so I can only imagine the minds of the spectators in the room. It must have felt like riding a Tilt-a-Whirl for an hour and a half. The lack of live fact-checking was a major contributor of this seemingly lawless debate that played out on live television. Because of this, Trump and, in some instances, Biden made claims that were either fully or partially untrue. For example, within the first five minutes of the debate, Trump claimed that “Roe v Wade was not even on the ballot” in reference to known pro-life Supreme Court nominee Amy Coney Barrett.

He also claimed to have a comprehensive health care plan when he most obviously has not even worked to replace Obamacare.

While I am disappointed with the events of Tuesday night’s debate, I am not surprised. Moving forward, I am relieved to know that there will be steps taken to ensure that the unprofessional unfolding of events that took place in Cleveland will not take place again. Whether this comes in the form of muting mics, penalizing the person who speaks out of turn or even investing in human-sized shock collars, I am happier to know that at least some precaution will be taken in the coming weeks.