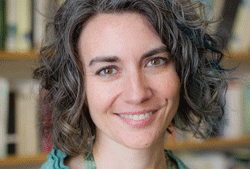 Jessica Richard is an associate professor of English who specializes in 18th century British fiction.

Within the English department, she is the director of undergraduate studies — meaning she oversees the major, helps with scheduling classes and encourages students to major in English. She has worked at Wake Forest since 2002.

Her research and classes focus on the 18th century — exploring novels such as Pride and Prejudice, Jane Eyre and Robinson Crusoe. This semester she is teaching one section of 18th-century British fiction as well as two sections of an entry-level English course; Introduction to the Novel.

Outside of the classroom, what projects have you worked on in the past?

My first book I wrote was called The Romance of Gambling in the 18th-century British Novel. It was a scholarly monograph published by Paul Grave Press.

The book focused on the ways 18th-century novelists used gambling characters to think about the representation of chance in novelistic plots. This is the period where the novel is really developing as a form and the issue of chance is an important issue in novelistic plot. If events in a plot are too predictable, then you’re not interested but if they are too crazy and out of left field then you don’t really believe the plot.

My argument in the book is that these authors use gambling characters to help promote the balance of a believable plot that is unpredicatable enough that it is interesting for the reader. Gambling characters are ones that often deal with predictions and outcomes, which add to the excitement of the chance and events in a novel. They are figures that help the novelist think through and act out the balance of the plot.

Have you conducted any other research and projects?

I also edited Rasselas right around the same time. I got into that project because at the time the existing paperback classroom texts of Rasselas were very, very old and hadn’t been updated for a long time.

Scholars knew that the introductions to those texts didn’t really talk about the relationship between this book and the Arabian nights and the Oriental tale which [the author] Samuel Johnson was clearly drawing on. People are pretty much aware of that now, but at the time, paperbacks from Oxford and Penguin were from the 60s and at that time the Arabian Nights were not considered so worthy of study.

The aim of my edition was to put Rasselas in the context that it really was in for the author. That way classrooms could think about the novel and its context more broadly so something like the Arabian Nights could be related to a more official novel.

It was really exciting to make because the Broadview editions have a bunch of appendices at the back with other related contextual materials, so I could include poems, essays that talks about what fiction was for Johnson, or other short little pieces he wrote that were also influenced by the Arabian Nights and Oriental tales.

So it was both a chance to write an introduction and notes that put this novel in the context it belonged and add supplementary material that would be good for my own teaching, and hopefully for other people’s teaching as well. That was a really fun project.

Are you currently working on any projects?

Right now I am working on a book about experimental education in the 18th century.

My husband and I homeschool our 11- year-old son and the process of doing that got me really interested in the history of education. It inspired me to question where our ideas about what school should look like come from.

In my first book, I had a chapter on educational games and gambling with children.

So that is where I first started to read a lot of work on this topic — especially a lot of work by a woman named Maria Edgeworth who did a lot of 18th century educational writing. She was very interested in experiential child-directed learning. I really find this topic interesting for me because it crosses my professional and personal life.

Why did you decide to switch from a topic like 18th century gambling to education?

After I finished my book on gambling I really wanted to do something that related both aspects of my life. I felt like during the early years of home schooling it seemed that my husband and son were having so much fun and I felt like I was getting left out.

So I started to feel torn between my professional life and my parenting so I decided to bring them together in conversation with each other.

How would you describe your teaching style?

My teaching is all discussion-based. I think the aim of a literature class is to put people in a room to figure out what is interesting in a text through the process of discussing.

I don’t want to tell them what’s going on and just give them my ideas. I’ve read these books a million times — I know what I think about them.

I love to and want to guide the conversation, but I want students to learn how to look closely at words and then also to make connections among the works across the semester and among their own experiences, in addition to making connections to the books they are reading in other fields they are studying.

My style is to facilitate discussion — including forcing people to talk who don’t want to talk.

I always say the first day of class is the period that I talk the most of the whole semesters. After that, I just want to be a part of a vibrant, lively conversation. That’s not to say there aren’t places for lecturing or giving content information. Real learning happens when you wrestle with something.

What makes you different from other English teachers in your department?

Oh, I don’t know if I’m very different, at all.

We each have areas we care about — I am the one who does Jane Austen and does 18th-century fiction where as my other 18th-century colleague focuses on poetry and drama.

But I think a lot of us have very similar teaching approaches and philosophies.

I guess the biggest distinction is the way I grade: I hold paper conferences.

The students individually come in and bring two copies of their paper. They bring one so that they can read their paper aloud to me and another for me to read along as they read.

That way I don’t have to take papers home at night to grade in addition to being able to give the students verbal and written feedback in a way that we can discuss it at the end.

I make them sit in my office but I just recently added pillows to my student reading bench to make it comfier. I know some people do it to some extent ,but not as much as I do.

That’s probably the biggest difference, but otherwise I would say we are pretty similar in our aims and goals and approaches.