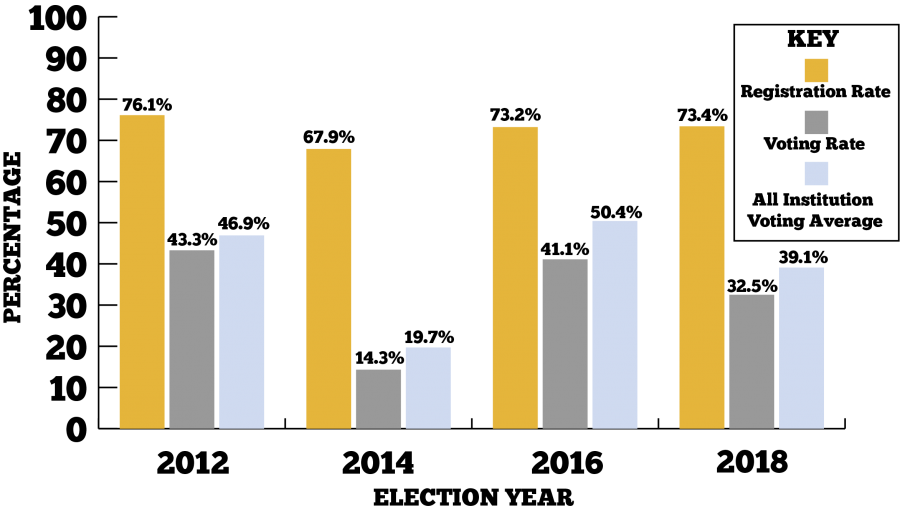 If you’ve been on social media at all in the past week, you have likely viewed many graphics reminding you to register to vote in the upcoming election. We’ve all heard it before, the youth vote is so important, and it is up to our generation to choose the leaders we want for our future. Right? Right.

Historically, young voters do not cast ballots nearly as often as their older counterparts do. In the 2016 Presidential Election, only 53% of registered young voters (aged 18-25) cast ballots in North Carolina, according to The News & Observer.

According to the campus report conducted by the Institute for Democracy & Higher Education, 76.1% of Wake Forest students registered to vote, but only 43.3% of registered students actually cast a ballot in 2012. In 2016, the voter registration rate decreased to 73.2%, and only 41.1% of registered Wake Forest voters cast ballots.

Clearly, there is a discrepancy in this data. Why are the majority of Wake Forest students registering to vote, but a significant amount of registered voters do not cast ballots?

There are lots of theories. Young voter turnout is a struggle every single year across the country, not just at Wake Forest.

Deb Marke, assistant director of advocacy and social justice education in the Office of Civic and Community Engagement (OCCE) feels as though the youth voter turnout is dependent on the way each individual has been socialized and views the concept of voting. Additionally, it is understood that not every politician perfectly captures the issues that young people find important, which could deter young voters from casting ballots.

At Wake Forest, however, Marke recognizes the fact that students have hectic schedules and are generally fairly busy. Very apparently, voting was not a priority for just under half of the student population in 2016.

“It’s really easy to get caught up in the Wake [Forest] bubble and forget everything going on around you. It can sometimes seem like one more thing that’s on people’s plates,” Marke said.

Despite recent statistics, Marke, who is the coordinator of the Deacs Decide election engagement project, is optimistic about Wake Forest voter turnout this year.

“I’m really, really hopeful. It seems like there’s a lot of energy all around campus, and folks are really clearly putting a lot of emphasis on voter registration, which is awesome, so I am really hoping that we have the same energy for voter turnout,” Marke said.

Beyond the walls of campus, Marke is confident in the young vote across the nation.

“Based on what they are projecting, it seems like voter turnout has already seen a major increase from 2016 based on the absentee ballots that have been received. I think that’s a good sign,” Marke said.

Senior Jenna Mayer is the Programming Fellow in the Deacs Decide election engagement project. Mayer hopes her peers show up and vote during this election period, but is not sure what will happen based on her experience on campus.

“Generally, I have mixed views about WFU students’ motivation to vote. I have definitely seen a lot of voter apathy among students throughout the past three years on campus. I am hoping that the high stakes nature of this election cycle, however, will encourage more students to put in the effort to get their absentee ballot or early vote,” Mayer said.

Most current Wake Forest undergraduates were not of age to vote in the 2016 presidential election, making this the first election they are able to participate in.

But for students who miss the Oct. 9 deadline, not to worry. There is another, lesser-known option called same-day registration, which occurs during early voting. From Oct. 15 to Oct. 31, students can register and vote immediately at any early voting site in the county. However, unlike in some states where you can register as late as Election Day itself, this is not an option in North Carolina.

For those registered in North Carolina, early voting is also a great option if you want to avoid crowds on Election Day, especially considering we are still in the middle of the COVID-19 pandemic. Early voting was created to increase voter turnout, and it is the perfect opportunity to take advantage of as busy college students.

If you choose to request an absentee ballot, check your home state’s rules. Every state has a different deadline for obtaining this ballot. In North Carolina, the deadline to request is Oct. 27, and it must be returned back to the state on or before Nov. 3.

First Assembly Baptist Church, which is located across the street from campus at the intersection of Polo Road and Long Drive, immediately past the Polo Road campus entrance, is a new polling place this election cycle where you are able to cast your vote early or on Election Day. If you need a ride there, Deacs Decide is working to provide transportation for students. But luckily, the church is walking distance from campus.

“I know that transportation is one of the biggest barriers for students for voting,” Marke said.  “I am still working to figure out how we can organize transportation during early voting and on election day so we have shuttles going consistently and dropping people off.”

Clearly, there are a lot of different ways for students to vote so they can make their voices heard. Choose whatever way works best for you, but make sure you cast a ballot, no matter which method you decide.

Senior Sam Bott chose to request an absentee ballot from his home state, Missouri. Bott is from St. Louis, and is looking forward to making his voice heard at home.

“I am definitely happy that I can vote for Missouri state and local leaders. St. Louis is still the place I go home to and it affects my parents so I’m happy to vote for whatever benefits us and them,” Bott said.

Senior Amanda Cummins, on the other hand, decided to register in North Carolina using her off-campus residence address, despite originally being from New York. This is a common decision among many college students.

Mayer is planning on voting early and in-person at the First Baptist Assembly Church.

“I am choosing to vote this way for convenience and due to concerns about absentee ballots as they are rejected at far higher rates than in-person ballots. I want to make sure that my vote counts,” Mayer said.

Voting is made possible for everyone who is eligible, and you can choose your ideal way to participate. You can do your research, read the ballot, decide how you want to vote and make your voice heard.

Voters aged between 30 and 50 years old made up the majority of the election in 2016. Students can now flip the script in 2020.