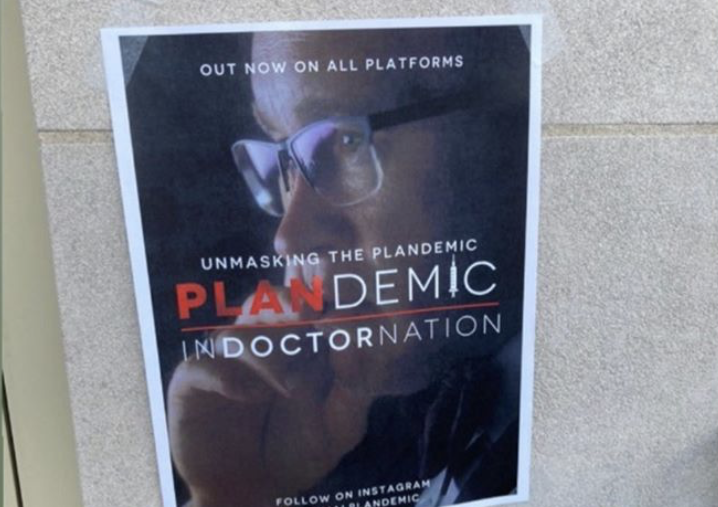 With its own lengthy Wikipedia page, misinformation surrounding COVID-19 has been circulating since the pandemic began. From the effectiveness of masks to the origins of the disease, conspiracy theories have become another challenge for countries to tackle in trying to curtail the spread of the virus. Over the past two weeks, multiple flyers spreading disinformation about the pandemic have been found on Wake Forest’s very own campus.

The first flyer, which was put up in multiple rooms in the ZSR Library on Sept. 17, posed the question “Tired of wearing that mask?” and included a QR code. Once scanned, the code leads to a website titled “Not From a Bat.com” which references the debunked conspiracy theory that COVID-19 was created in a laboratory.

The second poster, which was found taped on multiple buildings on campus last week, referenced a documentary titled Plandemic: Indoctrination and the Instagram account of the film, in which almost every post is flagged for being “false news.” Plandemic, which was released in two parts, has received flack for being filled with medical misinformation and has been removed from Twitter, Youtube, Reddit and most other major social media websites.

Staff across campus were instructed to remove the flyers, as the university has continued to provide accurate updates to the community via official communication.

“Wake Forest regularly communicates information based on current public health guidelines through the Our Way Forward site, social media, campus emails and in many other ways across campus. Current advice from infectious disease expert Dr. Christopher Ohl is posted on the site,” said Cheryl Walker, the acting executive director of news and communication.

Rosalind Tedford, the director for research and instruction in the ZSR Library, is currently teaching a first year seminar about misinformation alongside librarian Hu Womack. According to Tedford, the danger of disinformation is that we can experience confirmation bias — if we want something to be true, and we hear possibly false information confirming our beliefs, we are more likely to accept it.

“Take COVID-19 misinformation, for example. If we encounter and believe mis/disinformation about a disease — it can lead us to do things that endanger ourselves and others. So if we don’t want to wear a mask — and really who does? —and we hear something that says ‘masks are dangerous’ we are more likely to believe it even if the science says that masks are pretty effective at stopping the transmission of the virus,” Tedford said. “And if we believe that masks don’t work, then we don’t wear one, and that can make us more likely to get the virus and spread it — and in our case, more likely to cause an outbreak here on campus that could have consequences for us all.”

Philosophy professor Adrian Bardon, the author of The Truth About Denial: Bias and Self-Deception in Science, Politics, and Religion, echoed this idea in a recent piece he wrote on COVID-19 misinformation for The Conversation.

“In theory, resolving factual disputes should be relatively easy: Just present strong evidence, or evidence of a strong expert consensus. This approach succeeds most of the time, when the issue is, say, the atomic weight of hydrogen,” Bardon wrote in the article. “But things don’t work that way when scientific advice presents a picture that threatens someone’s perceived interests or ideological worldview. In practice, it turns out that one’s political, religious or ethnic identity quite effectively predicts one’s willingness to accept expertise on any given politicized issue.”

Sophomore Ethan Wearner spotted the “plandemic” poster all over campus — on Hearn Plaza, attached to Wait Chapel and outside the Pit.

“Disinformation campaigns, waged ostensibly under the guise of alternative science, are not only unethical but pose a risk to our collective wellbeing,” Wearner said. “If you see such information posted around campus, please submit a COVID-19 noncompliance form and contact the administration for further guidance.”

Wearner’s emphasis on the risk to our community’s wellbeing is not overstated when put in reference with Tedford’s expertise: disinformation is a viable threat to anyone, no matter one’s identity.

“So I think it’s easy to dismiss misinformation, and belief in misinformation, as being a partisan thing. The left claims the right is more vulnerable and the right says the same thing about the left. I just want everyone to know that it is a human thing. Our brains have evolved in certain ways that makes us all vulnerable to mis/disinformation if it’s presented to us in certain ways,” Tedford said. “And tech companies have designed products that feed us things in ways that take advantage of those cognitive biases. It’s everywhere — in Amazon Reviews, comments on social media, TikTok, Yelp, influencers on Instagram, YouTube recommendations, everywhere. So we all need to be vigilant about it and not assume that it is just something ‘other people’ are bad about.”