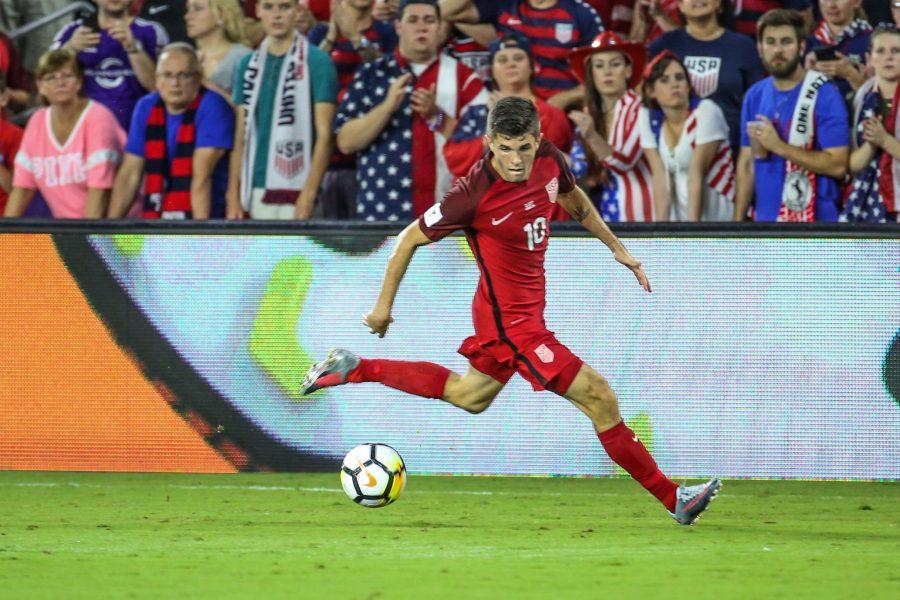 U.S. men's national team star Christian Pulisic (10) keeps his on the eye ball during a match at Exploria Stadium in 2018.

When the final whistle sounded and the small crowd at Trinidad and Tobago’s home stadium celebrated rapturously, the U.S. Men’s National team limped off the field in dumbfounded disgrace. Their dreams, more expectations than fantasy, of playing in the 2018 World Cup were left shattered on that pitch in Couva. Three years later, the program now has at its disposal a preponderance of European proven and American grown talent ready to rectify the broken image of United States Soccer.

After gaining the U.S. national team job in 2011, Jürgen Klinsmann began what became a controversial strategy of recruiting players who, despite never living in the U.S., were allowed to play on behalf of the country because of FIFA’s eligibility rules. The strategy brought some success, but many noted that it meant homegrown American talent was not being given a fair chance to grow and shine.

This generation is different. National team manager, Gregg Berhalter, has a roster full of players who came up through MLS academies, then made the jump to play for European clubs (barring a handful of exceptions).

Germany has long been a favored destination of talented American players. Borussia Dortmund is currently home to Gio Reyna, aptly dubbed by his teammate, the Norwegian striker Erling Haaland, the “American Dream.” The brilliant youngster, who doesn’t turn 18 until Nov. 13, has four assists and a goal through three appearances so far in the 2020-21 season.

Gio is the son of Claudio Reyna, who tore up the ACC with Virginia before embarking on a 13-year European career of his own. Reyna, since departing from the academy of New York City FC in 2019, has had a meteoric rise to stardom. The adept dribbler, assister and finisher has since staked his place on Dortmund’s first team.

In the Bundesliga, Reyna is joined by fellow MLS academy product Tyler Adams, who moved from the New York Red Bulls to RB Leipzig (also owned by the energy drink conglomerate). Adams scored a crucial goal in the Champions League quarter finals last season to defeat Atletico Madrid. The Missouri born forward, Josh Sargent, has also seen his stock rise as his play has improved with Werder Bremen, another club competing in the Bundesliga.

Dortmund’s, and the Bundesliga’s, most notable American alumnus of late is undoubtedly Christian Pulisic. Pulisic became the most expensive American football player in the world following his blockbuster move to Chelsea, worth nearly $73 million. Despite lingering injury issues, Pulisic broke out after the Premier League returned from its COVID-induced lockdown, managing a respectable nine league goals in his first season with the Blues. Pulisic returned to play this weekend after a lengthy recovery from a hamstring injury sustained in the FA Cup final.

During this summer’s transfer window, several other Americans found themselves in the headlines. First, it was Weston Mckinnie, who joined Italian champions Juventus on loan from Schalke. The former FC Dallas academy player has impressed so far, playing in the center of the midfield for the club. Chris Richards also spent time in FC Dallas’s academy and achieved a personal milestone Sunday, when he started at right back for the German champions, Bayern Munich. Bounding down the right flank, Richards fired in a low cross that found the talismanic Robert Lewandowski for his first assist of the season.

A player that fits within the Klinsmann model is the Dutch-born, Sergiño Dest. Dest is eligible to play for the U.S. under FIFA’s eligibility rules due to his Surinamese-American father’s nationality. After receiving minimal interest from the Dutch youth national teams years ago, Dest joined the U.S. under-17 team and never looked back. His final decision, made in 2019, to play for the U.S. was the result of an intense period of recruitment from Berhalter, but it was the recent $20 million move to Barcelona that truly propelled Dest into the global spotlight. The speedy fullback hopes to stake his place among the legendary Barcelona, and soon, will be tasked with helping to anchor an American defense seeking redemption at the 2022 FIFA World Cup.