Women’s Soccer goes 1-1 over the weekend 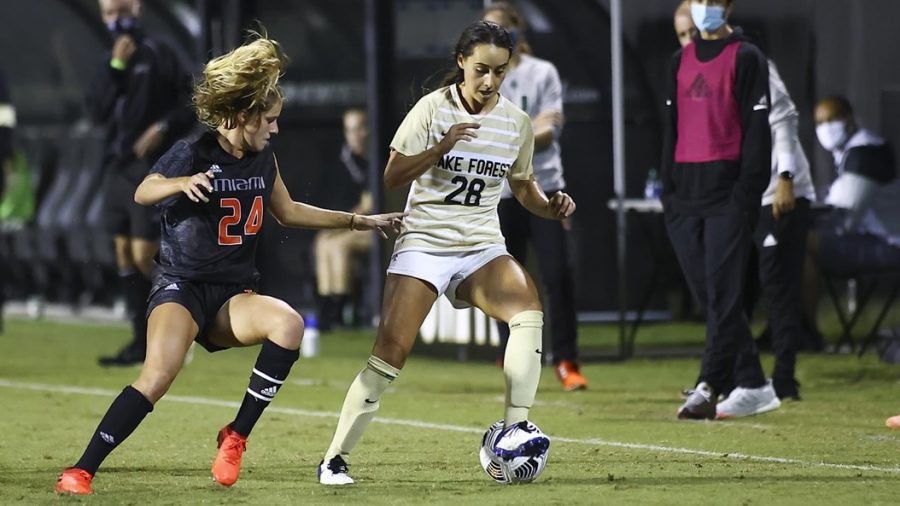 The Wake Forest women’s soccer team has had a shaky first month of games. Its record is 1-3-1, as it lost its first two games to Duke and UNC Chapel Hill. The team tied its third game, a scoreless rematch against Duke, on Sept. 20.

After its unsuccessful first couple of weeks, the team looked to turn things around during a two-game weekend. This past weekend caused both celebration and disappointment for the team.

On Oct. 1 at Spry Stadium, the Deacs got their first win of the season as they defeated the University of Miami by a score of 1-0. The first half was scoreless, but in the 68th minute freshman Carrie McIntire assisted senior Ryanne Brown’s breakaway goal. Brown had two shots on goal, one of which was the game-winner.

Despite the close score line, the Demon Deacons dominated the game and outshot their opponents 22-1. Over half of these shots came from Brown, senior Hannah Betfort, junior Giovanna DeMarco and redshirt junior Sofia Rossi.

The Deacs’ controlled possession for much of the contest,  and their constant threats to goal caused Miami to sit back for most of the game.

In goal, Madison Howard and Mia Raben kept the Hurricanes from scoring. In the second half, Raben saved the only shot on goal the Demon Deacons faced.

On Oct. 4, the soccer team faced No. 2 Florida State University. As predicted, it was a tough game for Wake Forest.

The Demon Deacons lost their fifth game of the season 4-0 as the Seminoles scored three goals in the opening 21 minutes. The fourth came in the 85th minute of the game.

The Deacs struggled to create offensive opportunities much more Sunday afternoon than in their game against Miami. Wake Forest’s opponents outshot them 17-2, with 11 of Florida State’s shots on goal.

Raben made five saves in the first half and Howard made one in the second. The Deacs’ performance improved in the second half, as the number of shots conceded was reduced to five.

The team failed to pressure the FSU defense in the first half, which made it difficult to catch up later on in the game. Though the Deacs’ communication improved, they still struggled to get shots off against a team with great depth.

Wake Forest’s next game is on Oct. 11 against Clemson, who has a record of 3-2. The game will take place at Clemson but can be watched on the ACC Network. After that on Oct. 15, the Demon Deacons take on Notre Dame in South Bend.

The next home game will take place on Oct. 29 as the Deacs face off against Virginia Tech.