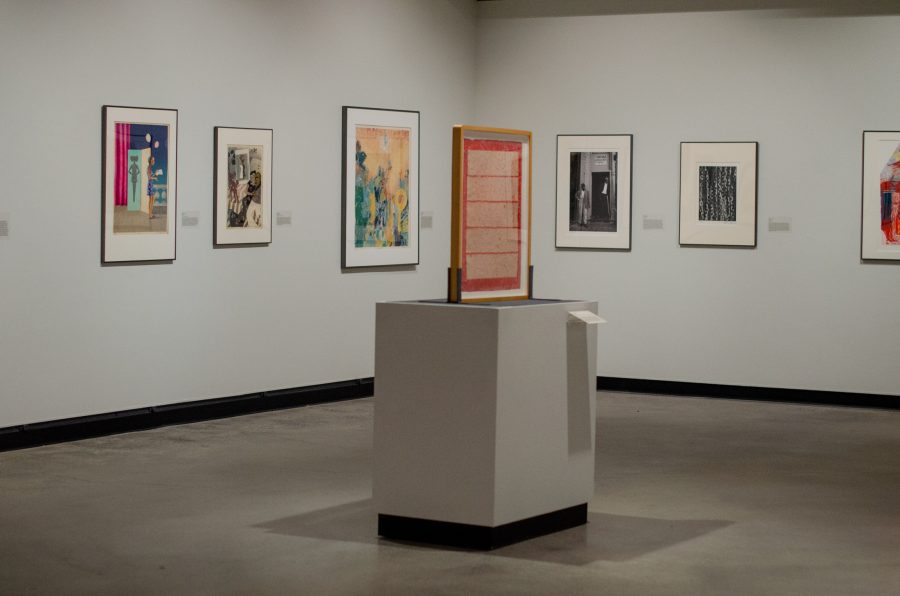 Explorations of Self: Black Portraiture from the Cochran Collection, which will run in Hanes Art Gallery until March 28, 2021, showcases 20th century Black American artists and their versatile expressions of self, reflections on history and innovative stylistic techniques. The gallery, accessible from Scales Fine Arts Center, presently displays works by Lorna Simpson, Romare Beardon, Camille Billops and Jim Alexander, among many others.

The works are part of a broader collection owned by Wes and Missy Cochran. In the spring of 2020, students in Professor John Curley’s art history course had the opportunity to engage with the Cochrans, as well as conduct research on Black American artists, their works and the broader political and artistic climates in which they lived. The students were responsible for curating the exhibition, as well as for completing the appropriate planning and research.

The exhibition itself is rather eclectic. Drawing on a plethora of image-making techniques, Explorations of Self is as multifaceted as one would expect from an exhibition focused on identity and its complex, even contradictory nature. Just as the gallery succeeds in underscoring the diverse means of conveying and exploring identity and concepts of self, it likewise finds success in its broader characterization of identity as impossibly elusive, constantly contested and by all accounts ambiguous. Such is the challenge presented by an exhibition dedicated to identity: what, if anything, can I know of a subjectivity other than my own? To what extent can one express something of themselves, without filtering the self through a variety of mediating elements, such as language, form and aesthetics.

But perhaps this is asking too much. Maybe all I can expect from a gallery visit is a sense — a sense of color and shape, chaos and organization, form and formlessness. There is certainly a sense-experience to be had by visiting Explorations of Self. The works range from eerie (see John Simmons’ “Man With A Pistol”) to ethereal (Richard Mahew’s “Summertime”), and this juxtaposition can be disorienting. If sense is all that is to be gleaned from art, rest assured Explorations of Self will provide.

However, I tend to look for more than sense-experience in art (some would say I’m misguided in doing so). It seems that in removing a work from its social and political context, much is inevitably lost. To commit oneself to a purely sensual experience in an art gallery is to fail to consider art as a form of — frequently radical — political expression. In this light, Explorations of Self is highly political — as political as identity itself. Artists are seen grappling with the histories of colonialism, confluences of race and gender, pursuits of civil and political rights and systems of oppression that permeate the lives and lived experiences of Black and brown American artists.

Camille Billops’ untitled 1992 work (“Mammy’s Little Coal Black Rose”) is one such piece, subverting and intertwining racist and essentializing caricatures of Blackness, such as that of the blackface minstrel. Billops’ painting reflects how imagery and language compliment one another in perpetuating racist narratives.

The Hanes Gallery, located in the Scales Fine Arts Center, is currently host to the Explorations of Self: Black Portraiture from the Corchran Collection exhibit. The exhibit is comprised of works from Black American artists, featuring pieces from Lorna Simpson, Romare Beardon, Camille Billops and Jim Alexander (Katie Fox / Old Gold & Black)

Another work which brings history and identity into conversation is Jim Alexander’s photograph “Stars and Bars.” Alexander’s candid shot of a Black man adorned with a Confederate and American flag in Atlanta, Ga, is visually striking and symbolically primed. When asked by Alexander what the significance of the flags were, the subject reportedly responded, “get these off me.” Resembling an image from Robert Frank’s seminal book The Americans, “Stars and Bars” depicts an overlooked America, a synthesis of past and present and a juxtaposition between the polity and the individual.

Explorations of Self: Black Portraiture from the Cochran Collection is as all-encompassing as it is narrowly focused — it is appreciative of the diverse ways in which Black artists have sought to portray identity and the Black quotidian, and succeeds in establishing a precise thematic subtext which facilitates a dialogue among the individual pieces. The exhibition is greater than the sum of its parts, a sign that it succeeds as a cohesive aesthetic and dialogic unit.