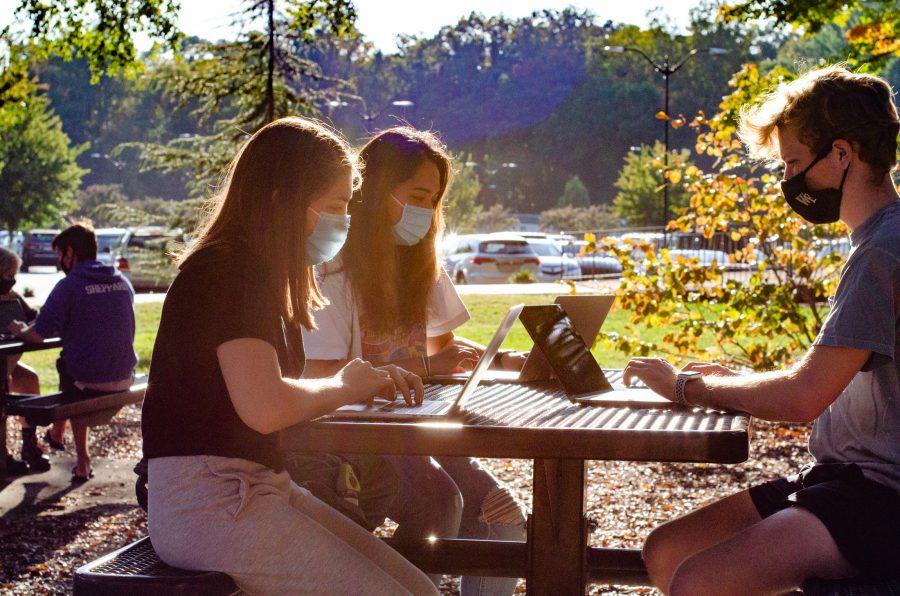 During the average year at Wake Forest, there seemed to be no end to a student’s study schedule. If you walked by the ZSR library’s atrium at 10 p.m. during midterms, it would normally be bustling with students studying in groups and grinding out papers. This year, however, COVID-19 has forced students to take on late-night studying in their dorm rooms due to shorter hours in the library.

Freshman Anna Attal says that she spends most of her study time at ZSR on the sixth floor, where she feels the atmosphere is “productive.” Yet, due to the library’s limited working hours, she isn’t able to study there as frequently as she’d prefer.

“I like the hours that ZSR is open because it pushes me to study earlier,” Attal said. “But some days, I wish the library would stay open past 10 p.m.”

Sophomore Conor Metzger stated that he thought the ZSR hours “are really short” since  “most people don’t start work until 10 p.m.” Both Attal and Metzger noted the importance of outside study space as an alternative to the limited library working hours, but once the weather gets colder, Attal noted that she is “worried about where [she will] study once it gets colder. [She] feel[s] like [she will] study more in her dorm room.”

This year due to the pandemic, ZSR closes at 10 p.m. every weekday and at 5 p.m. every Friday and Saturday.

Mary Beth Lock, the Associate Dean of the ZSR library, explained several reasons behind the early closure: to give custodial staff the time to go through proper sanitizing procedures, and ensure that there are enough staff working in the building.

“More people are working from home than ever before, therefore it’s hard to keep people staffed around the clock,” Lock said.

Instead of reservable study rooms, ZSR now offers study carrels, which, according to the webpage,  “are closet-sized rooms with a desk and chair.” While this is certainly a good option for one looking to study in a quiet space, the carrels are only open as long as ZSR is. So, if you’re looking to study after 10 p.m., it’s back to the drawing board.

However, there are solutions in the works. Lock mentions the lower floor of the Sutton Center, which can house 88 students at a time, as a viable solution. However, the location also closes at 10 p.m., though in the “very near future” it will be open until 1 a.m. This will be made possible through a soon-to-be-hired graduate student supervising the space.

The smaller court space of the Sutton Center is able to accommodate students due to its size and it is not so vast that it takes hours to clean, which will allow it to remain open until after midnight. Because ZSR is so large, it takes much longer to clean than a single room, and must be closed early. Lock emphasizes that students must pay more use to the sanitizing wipes available to wipe down their study spaces before and after use during the day, too, to keep ZSR clean.

In addition to increasing study space across campus, signs have been posted around campus that ask students if they’re looking for warm, quiet and private places to take their classes this fall. These signs hold a link which directs students to the Study Space page, which allows students to reserve rooms in DeaconSpace. DeaconSpace lets students reserve classrooms around campus, not to be reserved past 10 p.m. or on the weekends. So, reserving a DeaconSpace study space could be a good alternative to taking classes in one’s room or studying with friends outside in the cold, as DeaconSpaces allow two students per room.

Many students may be wondering about the lasting nature of the white tents around campus during the colder months of the year. Vice President for Campus Life Penny Rue says the university shares this concern and will look into supplying students with safe study and dining spaces, but as of now no concrete plans have been revealed for gathering spaces in the winter months.

Regardless of future arrangements, the ZSR staff are working hard to keep students safe and studying.

“The last thing we’d want to do is disappoint students,” Lock said.

As of now, the Sutton Gym space is the first of many that will allow students to maintain productivity in a safe fashion.