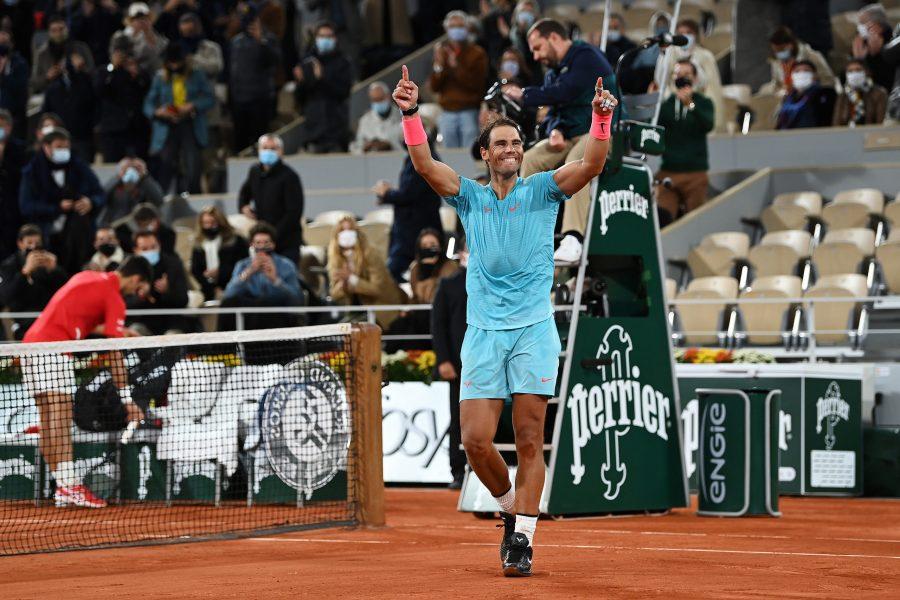 Rafael Nadal of Spain celebrates after winning championship point during his Men's Singles Final against Novak Djokovic of Serbia on day 15 of the 2020 French Open at Roland Garros on Sunday, Oct. 11, 2020 in Paris, France. (Shaun Botterill/Getty Images/TNS)

Death, taxes, and Rafael Nadal dominating on the clay at Roland Garros. Even in the divisive world of sports analytics, one would be hard pressed to find anyone who denies that Nadal is the greatest clay tennis player to ever walk the earth.

Nadal claimed his thirteenth French Open title on Saturday morning, defeating world No.1 Novak Djokovic in straight sets (6-0, 6-2, 7-5). The outcome of the match was never in doubt, as Djokovic failed to find his footing until late in the third set. By then, however, it was too late, and Nadal was able to break the logjam with a decisive victory in the tiebreaking game.

The Spaniard’s dominance in this year’s French open was not solely limited to the tournament’s final match. He won each of his seven matches in straight sets, dispatching a slew of worthy opponents en route to his most impressive performance yet: a total overpowering of the top-ranked player in all of men’s tennis.

“Uninspired” is not a word one would typically use to describe the play of decorated tennis powerhouse Djokovic, but it certainly applied all throughout this year’s French Open final. It appeared that Djokovic could simply find no answers for Nadal’s patient, explosive brand of tennis that has placed his name in the conversation with some of tennis’s greatest. Djokovic’s play in the final match was characterized by a strange flurry of unforced errors; several service returns found their way into the net, while others flew long or wide of the chalky white end lines. In true poetic fashion, the match’s final point was decided by a Djokovic double fault, adding the punctuation mark to an already grim sentence for the Serbian.

Nadal, on the other hand, played with his trademark poise and grace for the entirety of the match. There was never a moment in which Djokovic held the upper hand, as Nadal seemed to know exactly where Djokovic planned to place the ball before the shot had even been hit. Perhaps the most noteworthy aspect of Nadal’s play in this final match was the exceptional balance he showed in his lateral movement. Clay is a tricky surface to navigate, and Nadal’s ability to stop on a dime and change direction in a split second gave him an edge that Djokovic simply could not overcome. Nadal was patient, hitting smart shots until the opportunity to be aggressive presented itself naturally within the flow of the match. He seemed content to allow his opponent to make the mistakes, which proved a prudent strategy, as Djokovic struggled mightily to keep the ball in play as the championship match progressed.

After the final set had been decided, the joy on Nadal’s face said it all: the thirteenth title was every bit as sweet as the first. The Spaniard fell to his knees, overcome by the emotion of the moment, beaming at what he’d just accomplished. I’d say he’s more than earned the right to bask in his own limelight for a moment; after all, winning once takes skill, but winning the same major event 13 times is a sign of the once-in-a-generation greatness that has changed modern tennis as we know it. When it comes to the clay, Nadal is miles ahead of the pack, and he shows no signs of letting up.