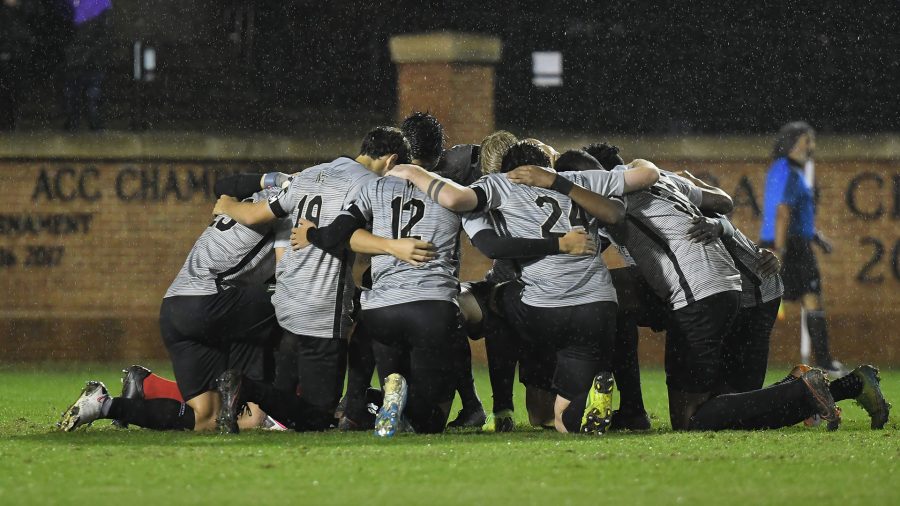 It was raining goals and rain as the top-ranked Wake Forest Men’s Soccer team bested the University of Alabama at Birmingham (UAB) by a score of 3-0 in their only matchup against a non-ACC team this fall.

Despite the tremendous downpour, there were still some Wake Forest fans who made the trip out to Spry Stadium. It was a testament to the dedication the team inspires and its impact on the community, both on and off the field. The latest poll after the game, which had Wake Forest at No. 1 for the third straight week, was the team’s 50th straight week in the top-10 and 70th straight week in the top-25. Indeed, Wake Forest’s consistent excellence will cause fans to prefer to be soaked to the bone, rather than miss a home game.

To put it bluntly, Wake Forest dominated in every aspect of the game, and was in complete control from start to finish. The Deacs had a 22-4 advantage in shots, 13-2 advantage in shots on target, a 9-1 advantage on corner kicks and held 64% of the possession. Additionally, 56% of Wake Forest’s possession time was on the UAB half of the field.

The non-conference matchup was a great opportunity to get a wider mix of players on the field, and 24 different Demon Deacons saw time on the pitch. Among those players, the star of the night was the sophomore forward David Wrona, who scored two goals.

Wrona’s first goal came in the 36th minute. Junior midfielder Isaiah Parente crossed the ball to freshman midfielder Colin Thomas, a few yards outside the 18-yard box. Thomas then controlled the ball and dribbled it into the 18 where he sent a cross on the ground from the left side of the box to a few feet in front of the center of the net. There, Wrona was laying in wait. A one-touch finish off his right foot put the Deacs ahead 1-0. Both Parente and Thomas were credited with the assist, which was the first of Thomas’ career.

For his second goal, just five minutes later, Wrona didn’t need quite as much help. He dribbled the ball from a little past the midpoint of the UAB side of the field towards the top of the box. He went directly at the defender and made a brilliant move to create separation. From there, he fired off a shot which bent away from the diving goalie and into the bottom left corner of the net. In addition to being his second goal of the night, it was also his third of the season.

Wake Forest went into halftime with a 2-0 lead. The starting defensive backline of Holland Rula, Nico Benalcazar, Cristian Escribano and Garrison Tubbs only allowed one shot the entire half, which was saved by goalie Andrew Pannenberg. With senior Michael DeShields still sidelined with an injury, the Deacs have given opportunities to freshmen like Escribano and Tubbs who have performed incredibly well.

In the second half, redshirt freshman Cole McNally was substituted in at goal and recorded one save. Wake Forest’s third and final goal was scored by sophomore superstar Calvin Harris in the 65th minute and was assisted by Parente. Harris’ shot was taken a few yards outside the 18 and soared above the outstretched goalie and into the upper left corner of the net. The goal was impressive in its raw power, deft placement and ability to sail through an onslaught of rain. It was Harris’ second goal of the season and Parente’s fourth assist of the season.

Overall, the Deacs did not let the rain rain on their parade of goals. Wake Forest now has a series of tough in-conference matchups ahead, with their next home game on Oct. 18 against UNC.