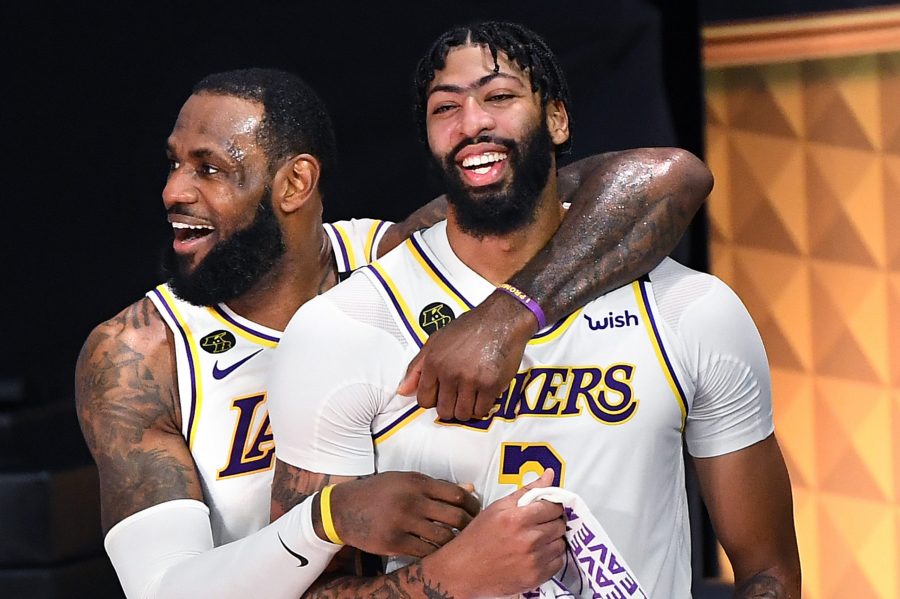 Los Angeles Lakers LeBron James, left, and Anthony Davis celebrate in the closing seconds against the Miami Heat as the Lakers win the NBA Championship in Game 6 of the NBA Finals on Sunday, Oct. 11, 2020 in Orlando, Florida. (Wally Skalij/Los Angeles Times/TNS)

On Oct. 11, the Los Angeles Lakers beat the Miami Heat to gain their 17th NBA Championship title, tying the Boston Celtics for the record of most championships ever won by an NBA team. The win ended an eight-year drought and served as a tribute to late basketball legend Kobe Bryant.

The Lakers beat the Denver Nuggets in the Western Conference Finals in September, earning them a spot in the finals against the Miami, who was led by shooting guard Jimmy Butler.

The Heat had some incredible moments during the finals, such as a nail-biting win in game five and the incredible range shown by 20-year-old Tyler Herro. Even so, the Lakers were too strong of a team to beat.

Led by LeBron James and Anthony Davis, the Lakers dominated the shortened regular season with a record of 59-11. The Heat, on the other hand, came into the finals as underdogs with a record of 44-29.

Coming off a loss in game five, the Lakers wanted to finish the series with a win in game six. Early on in the game, it became evident that that was exactly what they were going to do.

Late in the second quarter, the Lakers had jumped out to a 30-point lead over the Heat. By the end of the game, the Heat would narrow the gap to 106-93.

James, who joined the Lakers in 2018, was named the NBA Finals MVP for the fourth time in his career. James won his fourth championship after winning two with the Heat and one with the Cleveland Cavaliers. According to NBA.com, James is the first player in NBA history to be named the Finals MVP with three franchises.

In game six, James put up 28 points, 14 rebounds and 10 assists, all of which helped make him the unanimous choice for the Finals MVP. His career, however, has been criticized to no end, as people have questioned and doubted his ability to lead his team to a championship after an injury last season.

Davis called winning his first NBA championship “a surreal feeling.” The former Pelican said, “When I got traded, that’s all I wanted was to be a champion. To be able to compete, be able to win. I was able to do that my first year with the Lakers.”

Davis, who is now entering free agency, said in response to what his future will look like, “I have no idea. I don’t know.”

What is certain is that Davis and James proved themselves as one of the most versatile and talented duos in the NBA. The 27-year-old Davis has benefitted from the leadership of 35-year-old James enough to help bring his team a title.

Butler, on the other hand, left this NBA Finals with great disappointment. He told reporters, “I told them [coach Erik Spoelstra and president Pat Riley] that I’d win them one [a championship] and I didn’t hold up my end of the bargain, so that means I need to do it next year.”

Though it was a sad moment for the Heat, the Lakers’ victory was a cause for celebration in LA after the tragic loss of beloved former Laker Kobe Bryant and his daughter Gianna in January.

The wife of late Kobe Bryant, Vanessa, wrote on Instagram, “Wish Kobe and Gigi were here to see this.”

The 17th NBA Finals victory will certainly be a memorable one for the Los Angeles Lakers.