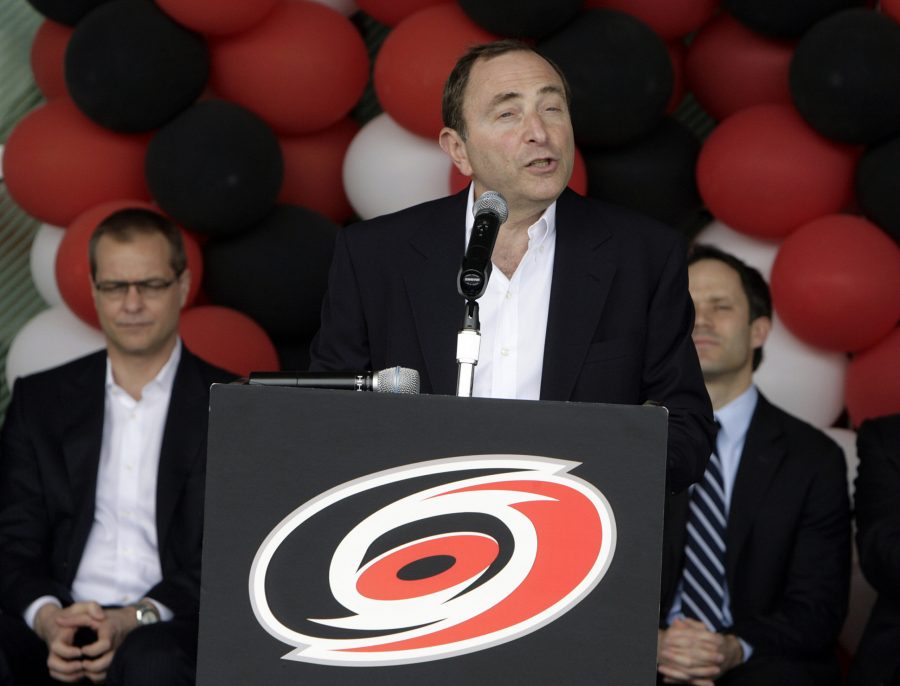 NHL Commissioner Gary Bettman, center, announces that the NHL All-Star game will be played in Raleigh, North Carolina in 2011 during a press conference held outside of the RBC Center on Thursday, April 8, 2010. (Chris Seward/Raleigh News & Observer/MCT)

The prolonged feelings of angst for the world’s best young hockey players are over after the 2020 NHL Draft concluded on Oct. 7. Originally scheduled for late June, the seven-round, 217-pick, two-day event was postponed for four months due to the halted season in which the Tampa Bay Lightning vanquished the Dallas Stars in a six-game series to hoist Lord Stanley’s Cup.

Besides the playoff expansion and the bubble lifestyle, a new draft format was announced by the NHL in August. It is a little confusing, so bear with me.

Of the 31 teams in the league, 24 teams qualified for the postseason. The seven who did not qualify participated in the lottery to determine draft position. But only picks two through eights were claimed. A best-of-five qualifying round consisting of the 24 playoff teams, 12 teams from the Eastern Conference and 12 from the Western, took place Aug. 1-9. The top four teams in each conference, based on percentage points, played round-robin style and could not be eliminated from contention. The remaining eight teams played their opponent in a typical playoff tournament style with the lowest seed playing the highest and so on. The teams who were then eliminated were placed into a second lottery to determine the first overall draft pick. All teams had the same odds, but the New York Rangers had a lucky night and were able to select Alexis Lafreniere with the first choice.

Lafreniere, the 19-year-old Canadian winger, was the projected #1 pick prior to the 2019-2020 NHL season and was also the #1 pick in the 2017 Quebec Major Junior Hockey League Draft. In January 2020, Lafreniere led Canada to the gold medal in the World Junior Championships as well as earning the tournament MVP award. His contract with the Rangers is three years, $925k annually, which is the maximum for a rookie and was facilitated by Emilie Castonguay, who is the first female agent of an NHL No. 1 pick, per Emily Kaplan of ESPN.

The Los Angeles Kings used the second overall pick on center Quinton Byfield, also a member of the Canadian Junior team that won gold. Byfield became the highest-drafted Black player in NHL history. Notoriously the least racially diverse team sport in North America, the NHL only has 43 active players of color, which is less than 5% of the entire league.

Pressured by a summer of persistent police brutality and protesting, Commissioner Gary Bettman announced the creation of the multiple committees intent on facilitating more opportunities for executives and players to feel more included in the business side of the NHL. Mandatory inclusion and diversity training will be implemented prior to training camp of the 2020-2021 season.

The virtual draft allowed for the Ottawa Senators, owners of the third pick, to enlist Alex Trebek to announce their selection through a Final Jeopardy-style announcement: “Who is Tim Stutzle?”

The most heartwarming part of the event occurred during the final pick of the first round. San Jose Sharks’ director of scouting used American Sign Language to tell Ozzy Wiseblatt and his mother Kim, who is deaf, that he is the newest member of the San Jose team. The camera in the living room showed the Wiseblatt family jumping and yelling in their living room to celebrate the news.

Canada produced the most draftees with 71, followed by the United States, Sweden, Russia and Finland. The upcoming season is expected to commence on Jan. 1 with training camp dates and other season information to be released later.