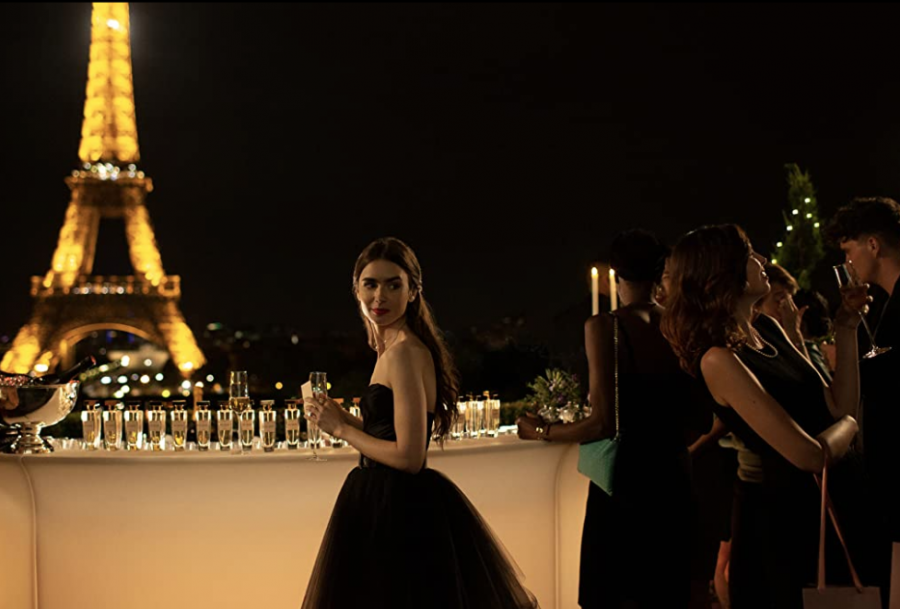 A week ago, my mom sent me the trailer to Emily in Paris, a new show starring Lily Collins as Emily Cooper, a young Chicago-based marketing agent who follows her job to Paris. “Critics hate it,” my mom told me, “but it seems like something you’d like.”

My mom knows me well. I devoured all 10 episodes in a day.

I understand why critics despise Emily in Paris. Its dialogue is corny and the show is chock full of French clichés: every Parisian character is constantly smoking, Emily’s coworkers are snobby and cold and most of the men who pursue Emily sexually are older and taken.

The chief romantic arc is between Emily and her neighbor Gabriel, a charming, flirtatious French chef who bears a striking resemblance to Armie Hammer. Yet Gabriel has a girlfriend, Camille, who becomes close friends with Emily when they meet by chance at a flower stand. Throughout the season, Emily and Gabriel kiss and flirt behind Camille’s back. The show glamorizes Emily and Gabriel’s deeply problematic relationship: their first kiss is paired with swelling romantic music and Camille and Gabriel conveniently break up in the season finale so he and Emily can share a passionate night together.

Even with its flaws, I loved Emily in Paris. It is delightful escapist TV. There is no pandemic in Emily’s world: we see her enjoy Parisian parties, cafés and opera houses. Friends and romantic interests seem to fall in Emily’s lap. Each time she makes a mistake, she is granted a second chance or the situation resolves itself — in the last episode, her boss even fires her before changing her mind and not going through with the termination paperwork. Emily racks up thousands of Instagram followers from low-effort content like selfies and photos of croissants. Her poor French causes her no problems besides occasional chastisement from her coworkers.

In the midst of COVID-19, radical social and political unrest and environmental degradation, I found it immensely comforting to spend five hours vicariously living Emily’s picture-perfect life. Unlike many critics, I also generally liked Emily. Of course it was rude of her to expect everyone to speak to her in English, and terrible that she continually chased someone else’s boyfriend. Yet I thought Emily was great at her job — in one instance, a high-profile fashion designer calls her the French term for “basic bitch” yet, unshaken, she tracks down his box at a ballet, bonds with him over “Gossip Girl” and snags him as a client. I also admired Emily’s relentless optimism. No matter how much her boss puts her down, she comes to work the next morning as bubbly as ever, ready to defend creative pitches or win over new clients.

Emily in Paris celebrates, rather than punishes, its female characters’ ambition. In real life, France has only had one female Prime Minister and just nine of France’s top 120 businesses have a female CEO. Similar narratives play out in fiction — in Gilmore Girls, the extraordinarily hardworking and intelligent character Paris loses valedictorian, a spot at Harvard and her position as editor of The Yale Daily News. Yet Emily is repeatedly rewarded for her energy and skill as clients run with her ideas for exhibits, campaigns and fashion shows. Similarly, Emily’s friend Mindy easily draws crowds of awed onlookers and lands a twice-a-week gig when she starts singing again following a decade-long slump. Emily in Paris is a refreshing escape from the sexism usually plaguing women’s professional lives.

As I closed my laptop after finishing the last episode, all I could think was how excited I am for season two and how I wish I could vanish into Emily’s world. That tells me creator Darren Star was doing something right.