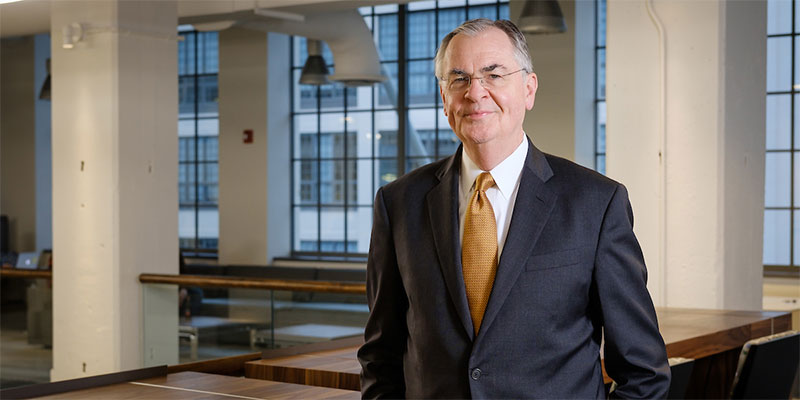 Wake Forest is a very different university than it was 15 years ago, and that is in no small part thanks to President Nathan Hatch.

In July of 2005, Hatch left his positions as Provost and professor of history at Notre Dame University to serve as Wake Forest’s 13th president. After a long career in academia and higher education, he announced on Tuesday that he intends to retire from the university on June 30, 2021, or until his position is filled.

Hatch expressed in an interview with the Old Gold & Black that he had intended to announce his retirement this summer, before the COVID-19 pandemic. He notified the Chair of the Board of Trustees, Gerald R. Roach, of his intentions to retire early last spring and has been planning for this transition for several years.

“We and the trustees said let’s just put things on hold. The community doesn’t need further distraction, and so we postponed it.”

But Hatch felt comfortable moving forward with the announcement in recognizing the strong leadership team in place, as well as the university’s positive response to the coronavirus pandemic. Hatch made it clear that his decision to retire was not at all related to the COVID-19 crisis.

“When I originally came in, the kind of understanding was 10 years, but things were going well. We were energetic and so it was logical to stay longer,” he said. “It wasn’t at all a sudden decision. It wasn’t at all related to COVID-19. If this year had been a disaster and I needed to stay, I would have done that, but I think our community’s very stable.”

Hatch plans to remain in Winston-Salem and will likely pursue writing and consulting on a part time basis, but he does not plan to take another full-time position.

“Over these 15 years, the Hatches have faithfully led Wake Forest University. They have been model citizens for this community and have inspired a generation of growth and achievement that has transformed Wake Forest. The Board of Trustees is grateful for their exceptional leadership, and we look forward to joining together as a community to thank the Hatch family for their numerous contributions to our institution in the coming months,” said Roach in an email sent to the university community via the Office of Communications and External Relations. He will oversee the process in securing the university’s next president.

Upon arriving at the university, Hatch sought to clarify the university’s goals and opportunities in considering its status as a collegiate university, one that has professional schools and athletics, but teaches more like a college.

“I wouldn’t say I came in with any prescriptive plan. It was to say, ‘How can this place with a wonderful tradition go to the next level?’.”

During his tenure, Hatch helped orchestrate much needed cultural shifts within the university and brought unprecedented national recognition to the university through various projects and initiatives. Hatch was intentional early in his presidency to assemble a strong leadership team he could work closely with. He brought on Jill Tiefenthaler as Provost, an economist and expert in higher education, who helped establish the university’s test-optional admissions policy in 2008. Wake Forest was the first top-30 national university to implement such a policy.

Steve Reinemund, former CEO of Pepsico, was brought in as Dean of the newly merged undergraduate and graduate business schools, a merger that took several years to complete, and prompted the construction of Farrell Hall, which Hatch said was one of the biggest challenges he encountered as president.

Hatch’s commitment to forging personal relationships through face to face interactions has been central to the policies he has pursued. He spearheaded both the Call to Conversation initiative and the three-year residency requirement, with goals of shaping more meaningful conversations and opportunities for collaboration.

“Face to face conversation is the heart of what it is to be human and to understand other people. In an increasingly technological society, an increasingly digital society, it reinforces those dimensions of community,” Hatch said. “I think it’s one of the reasons Wake Forest has broadened its appeal. It is a place that stands for excellence but it’s not excellence in the abstraction. It’s excellence in a very personal sense where individuals count, where community is important, where conversation matters. It’s our commitment to Pro Humanitate.”

In connection with this mission, Hatch began the process of establishing residential colleges, modeled after Dartmouth College’s residential living model. Unfortunately, the project was put on hold because of the pandemic.

“Once again, it was to highlight the importance of interpersonal interactions and personal connection. I know Dean [Michelle] Gillespie and [Vice President] Penny Rue both think that long term, that would be a really good thing for Wake,” Hatch said. “It would take a lot of investment but i think that’s something that’s worth considering long term.”

Arguably, one of the most monumental moments during Hatch’s presidency was his and the Board of Trustee’s issuing of a public apology for the university’s participation in slavery.

“That was a significant historic moment. That’s something I will remember,” Mary Pugel, Hatch’s Chief of Staff, said. She has worked closely with him since 1997, starting as his Senior Executive Assistant in the Provost’s office at Notre Dame, and following him to Wake Forest in 2005.

Shortly after, the university created the President’s Commission on Race, Equity and Community as well as supported the Slavery, Race and Memory Project. Hatch feels strongly that the incoming president continues efforts to address this issue.

“It’s absolutely essential and it needs to be continued, even accelerated, for Wake Forest to be a welcoming place and to come to terms with the fact that we are a southern institution historically. There are ways in which we have not expressed that attitude of welcoming, embracing, listening to all voices as we should. The work is ongoing and it involves a lot of things but certainly it needs to be a priority of the next administration.”

Pugel describes the Magnolia Scholars program as one that has not only diversified the campus, but has ensured “those students have every chance of succeeding.”

“I am particularly proud of the ways that we’ve been, over the years, able to diversify the Wake Forest student body. This student body looks different than it did 15 years ago and it looks like the world that we live in. That’s very rewarding to me,” she said. “We’ve still got a lot of work to do and it’s not as though we can rest on our laurels but the university has made significant progress.”

However, Hatch did express the difficulties involved in addressing issues related to race, namely the controversy surrounding a photograph of Senior Assistant Provost Martha Allman standing in front of a confederate flag during her college years at Wake Forest.

“In consultation with our team, I accepted Martha Allman’s apology and I think that was a mistake. I needed to do more listening and right away I admitted it was a mistake. But you’re called upon to make quick decisions, you use your best judgement and most of the time you’re right, but you have to have the humility to admit when it hasn’t gone right,” Hatch said.

In an effort to establish the university’s presence in the local medical community, Hatch helped integrate Wake Forest University Health Sciences with North Carolina Baptist Hospital under unitary management early in his presidency, following three years of intense negotiations. This initiative has come full circle, as just last week, Hatch finalized the merger between Atrium Health and Wake Forest Baptist Health, which was a year and a half in the making. Hatch’s decision to establish university academic programs in biomedical sciences, engineering and STEM at Wake Downtown further reflects this effort. Wake Forest also expanded its presence in Charlotte, a hub for Wake Forest alumni, in its establishment of the Charlotte Center, which focuses on graduate business education.

Hatch’s achievements extend well beyond the gates of the Reynolda campus and even beyond state lines. Under his leadership, Wake Forest has significantly expanded its national presence with the launch of both the Wake Washington and Wake West programs. These semester-long opportunities allow students to study and intern in Washington D.C. or in Silicon Valley. Under Hatch’s presidency, the university also introduced Global AWAKEnings, a first-year abroad experience in Copenhagen, which Hatch called an “experiment.” Though a limited program, it has been widely considered a success.

With just under nine months left in his term, Hatch, as well as several of his close confidants, assure the university community that he will continue to remain as engaged as he has always been in carrying out his responsibilities as president, especially related to the university’s response to the coronavirus.

“He doesn’t plan to coast through the next nine months,” Pugel said. “There are still a lot of initiatives. I would say the biggest one that’s confronting all of us is COVID. We need to continue on a day by day basis to address the huge challenges that COVID-19 presents us.”

In fact, Hatch said that witnessing the university’s response to COVID-19 has been one of the most rewarding aspects of his presidency.

“What sticks in my mind, and I think in several years from now I would answer the same way, it is seeing Wake Forest come together as a community to address COVID-19. It has been a hugely intense effort. For many staff and faculty, this was a year without a summer because there was no playbook on which to go,” he said. “When I see all of that and the way people were willing to work on behalf of the overall community, it’s quite remarkable. It’s a great story, or a hundred different stories of how people have sort of reinvented the university.”

There is no shortage of kind words from university and national leaders alike that reveal Hatch’s skillful leadership, particularly from those who know him best.

“I really consider him one of the finest leaders in higher education and what a gift it’s been for me to have had the opportunity to work with someone like that,” Pugel said. “He is the same person that shows up in the office every day in terms of who he is, what he represents and his personality. I have deep admiration for him and I have thoroughly enjoyed the last 15 years and I look forward to working closely with him through the end of his term.”