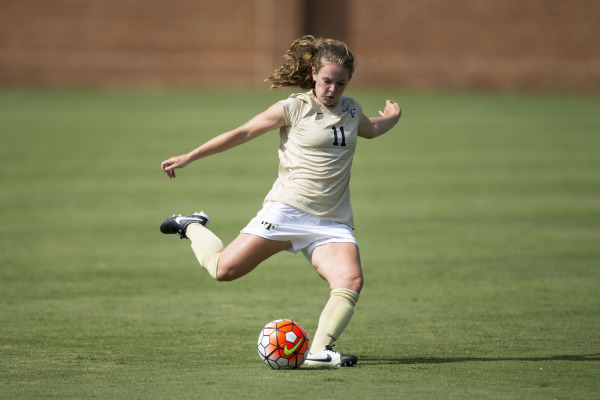 The Wake Forest women’s soccer team began their season on a high note on Sunday, Aug. 23 with a 4-0 victory over the Bulldogs of the University of Georgia at Spry Stadium. The high-scoring affair had eight Demon Deacons register a goal or an assist throughout the match, the first time such a stat line had been recorded by Wake Forest since 2005.

The Deacs only played one preseason exhibition, against Ohio State on Aug. 15. They won that match 1-0 with help from a 78th minute goal from senior midfielder Katie Dry, and a stellar 25 saves from goalies Lindsay Preston, Taylor Kerxton and Nonie Frishette. Wake Forest kept up its shutout streak into the first official match of the season against Georgia, only allowing two shots on goal from the Bulldogs.

The midfielder Dry also kept her streak of scoring game-winners intact through the first match of the season, putting one past the Georgia keeper off of a give-and-go with midfielder Maddie Huster in the 13th minute. The onslaught didn’t stop there, however, with Ally Haran grabbing the second goal off a Sarah Teegarden free kick. In the second half, two Deacons notched their first career goals, with plenty more sure to come. Kaylah Seymour and Kendal Robino both put the ball away to run the score up to 4-0, and the Deacs didn’t look back from there.

It was the eighth straight season-opener that the Deacs have won, and the 4-0 scoreline was more convincing than any effort Wake Forest put forth last season, when they failed to beat any opponent by more than two goals.

Head Coach Tony Da Luz was thrilled with the effort in the first game.

“I’m elated for the result. It’s kind of a relief to get the first game of the season out of the way and get a good win,” said Da Luz. “We rushed some things there after we got the lead, but the soccer was good, and I thought the transition to win the ball back was really good.”

Da Luz also spoke on the difference between last year’s squad and the 2015 team.

“Last year was last year. This is a brand new group, and I think we have a little more talent, a little more depth and another year of maturity, really,” he said. “With Katie Dry, a senior, scoring the first goal, and Kendal Robino scoring the fourth goal, the subs did a good job.”

Midfielder Maddie Huster detailed what allowed Wake Forest to maintain such a strong grip on the pace of the game throughout the match.

“Just staying tight throughout the midfield, playing with each other, working off of each other, getting to know each other on the field and keeping our chemistry up,” said Huster after the match.

“We stayed really compact, with our game plan and were able to connect through the back when we had the ball,” said central defender Ally Haran after the match.

Ranked ninth in the ACC preseason polls after their eighth-place finish last season, the Deacons will look to continue to capitalize on their high-powered offense as they go on the road for four straight matches against Alabama and Samford, and a tournament in Raleigh on September 4.