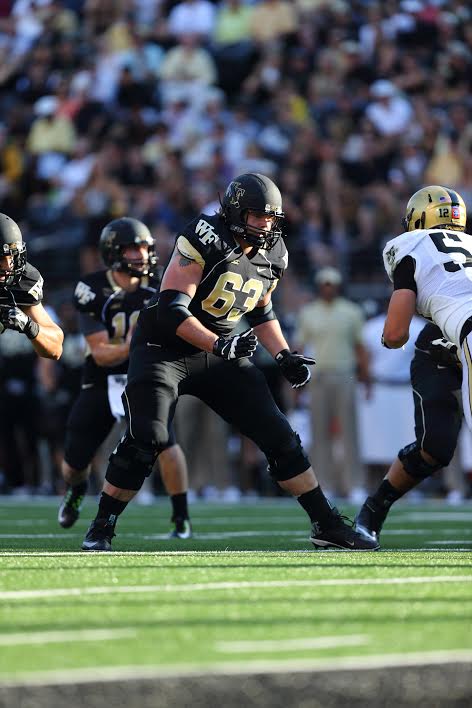 As the only senior starter on the offensive side of the ball, team captain and guard Dylan Intemann has taken a leadership role among his peers on the Wake Forest football team. The North Carolina native is the most experienced player on the squad with 28 career and consecutive starts, and he’ll continue to be a mainstay on the offensive line this year, the second under head coach Dave Clawson. Intemann, a communications major and member of the ACC Honor Roll, will be looking to lead Wake Forest to his first winning season of college football in his final year of academic eligibility.

How has the preseason been in comparison to past years? Has it been tougher?
Last year when the new staff and Coach Clawson came in, it was definitely harder. This year, it’s been just as tough, but we’ve been preparing ourselves so that we can handle it better.

75 of 104 players on the roster this year are freshmen or sophomores. What is it like being such an experienced player on such a young team?
I think a lot of the guys, you know, they always look up to you, but it also kind of puts you under a microscope. You have to show them the right thing, do the right thing and lead them in the right direction. I think it’s difficult for them as well, because they have to act as if they’re an older member of the team sometimes because we’re going to be starting a lot of young players and they have to play older.

What goes into playing older?
When you talk about playing older, you’re talking about freshmen who will be playing and need to cut out what you would call the “freshmen screwups,” or people just messing up basically. You have to come into the game having the mindset that you need to play as an experienced player.

What is it like being on the offensive line as a senior stalwart? Are you mentoring any of the younger guys?
We have Justin Herron and Phil Haynes, who are both freshmen, and I was talking about how they have to play older. I think those guys look towards me, junior Josh Harris and Ty Hayworth. They look towards the guys who have playing experience and we just have to show them the ropes and teach them the correct things to do.

You recently changed positions from tackle to guard on the offensive line. How’s that transition going?
It’s just different style of play. On the outside, you have the real fast guys who run around you. On the inside there are bigger guys who are trying to run you over. It’s definitely a transition in the way you play. It’s also more physical in the running game when you play in the middle. You’re not on the outside trying to cut the edge off and stuff like that. It’s a different style of play. I think the best way to put it is speed vs power in terms of different play styles.

Obviously there are expectations to improve in Clawson’s second year, but how have you improved over the last two years?
We switched systems with the new staff last year, and I had the old system down pretty well. When they came up with the new system, I had to learn that. In the last two years with the transition happening, my mental knowledge of the new system has gotten a lot better. Of course, with (sports performance) coach Hourigan coming in, everybody on the team has gotten so much stronger. So you’ve seen people grow and we’ve blossomed. It’s been awesome.

Who have your biggest motivators and inspirations been throughout your Wake Forest football career?
Probably my previous coaches. I keep in touch with a lot of my high school coaches, and my dad was a motivator and inspiration as well. My grandfather and a lot of the male role models in my life have been significant figures.

Plans after graduation?
Most likely, I’m going to try the NFL thing, and if it doesn’t work, that’s why I came to Wake Forest. I have that degree. I think I’m going to go into teaching, because there’s always going to be a need for teachers. That’s part of the plan, to do Teach For America, live in a different city, and it will be good.