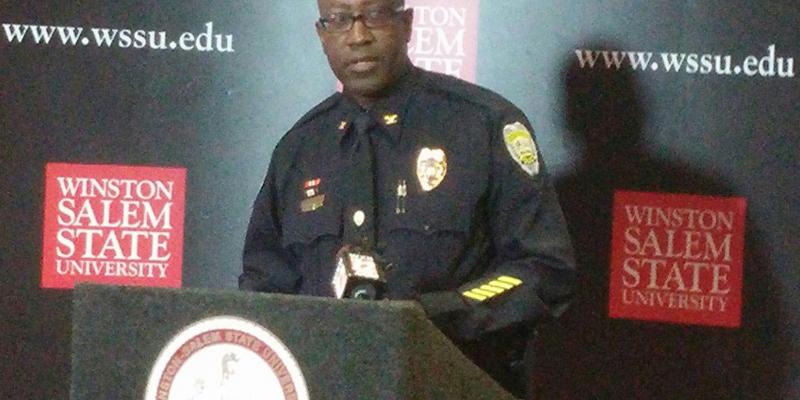 Shots rang out in the early morning of Nov. 1 on the Winston-Salem State University campus. The horrifying result: one 19-year-old student dead and another hospitalized. Anthony White Jr. was a sophomore from Charlotte, N.C.

“There were days that Anthony would come into class and he would be on top of things and he would make an impact on the other students,” said Brandy Pittman, a WSSU junior.

White was murdered at 1:20 a.m. Nov. 1, outside of his car, near Wilson residence hall. The other student who was wounded has not yet been identified. He was released early Nov. 1 from the hospital, according to the WSSUPD.

Suspect Jarrett Jerome Moore, a former WSSU student, was apprehended by Charlotte-Mecklenburg Police after a brief foot pursuit, according to a WSPD press release.  This was due to outstanding warrants unrelated to the WSSU shooting. Moore was then charged by the Winston-Salem District Attorney’s office with murder and possession of weapons on school grounds in connection to White’s death.

WSSU responded quickly to the incident Sunday morning. WSSUPD spokeswoman Jamie Hunt explained the university procedures. Hunt said that the RAM alert system alerted students to the school lockdown at 1:20 a.m., which lasted three and a half hours.

“The Winston-Salem City Police will be the main investigators,” Hunt said.

According to a WSPD press release, the investigation is ongoing, but the city and university’s police departments will be collaborating on the case.

The WFUPD has also offered to help the other police departments during this time. “The WFUPD routinely works closely with the Winston-Salem Police Department and the Winston-Salem State University Police Department,” said Sgt. Lesia Finney, the WFUPD coordinator of community policing. “We meet with the WSPD and local colleges on a monthly basis to share information on crimes in the area and best practices for law enforcement. After the shooting at Winston-Salem State University, the WFUPD has offered extra assistance to WSSU.”

The recent deaths have shocked some members of the Wake Forest community, specifically on how WFUPD can protect Wake Forest students.

In addition to the extra assistance provided to the WSSUPD, the WFUPD have also expressed sympathy towards those affected by the shooting.

“Anyone connected to higher education has a heavy heart when a tragedy like this occurs on a college campus,” Finney said. “Keeping the Wake Forest students, faculty and staff safe is our top priority.”

Currently, Wake Forest does not use the RAM alert system, opting instead for mass email and on campus alert methods such as the LiveSafe App that the WFUPD launched this year.

Students on campus expressed safety concerns brought up by the reality of the situation.

“[The shooting] makes you think about how our campus isn’t totally secure either,” said sophomore Doug Moody. “This could have just as easily been people we know on our campus.”