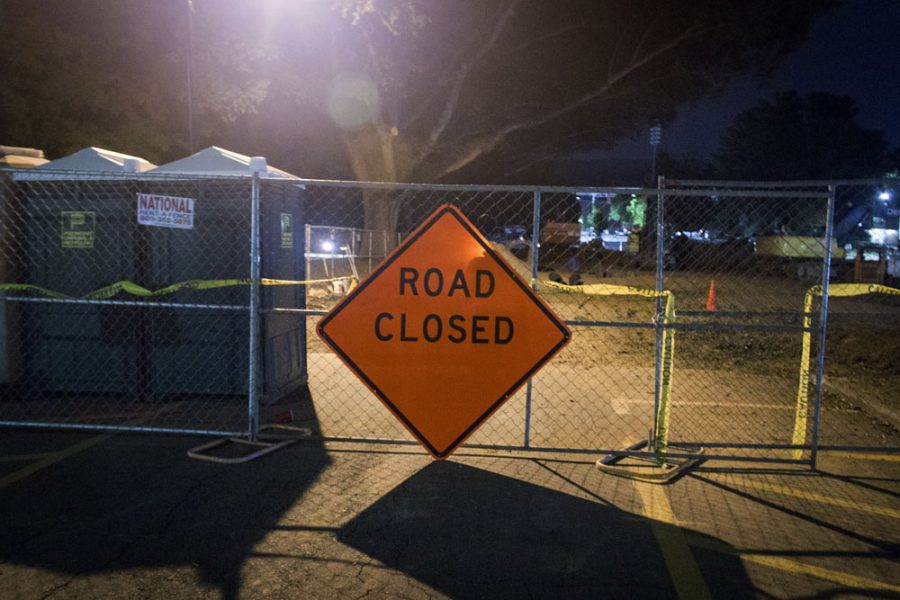 Since the start of the semester, the construction of new residence hall in South Campus has blocked Jasper Memory Lane, cutting off all traffic through to Wingate Road.

The new dorm will house freshmen and be located next to Collins Residence Hall. The construction has also led to the closure of Parking Lot J and Parking Lot H, further limiting available parking space for students on campus.

The residence hall, planned to sit next to Collins Residence Hall, has replaced what was Parking Lot H. The project is projected to be completed by January of 2017.

The building will be 75 thousand square feet, holding 225 beds to help alleviate current over-housing and serve as a new revenue source for the university.

However, the construction is a problem for some residents of South Campus.

Not only has the closure of the road and the parking lots been a hassle, but the construction has been disruptive to some freshmen.

In addition to the noise, the construction also obstructs what used to be a beautiful view.

“I can see [the construction] outside my window,” said Bostwick resident Ashley Hagan. “I really wish I could see our beautiful campus in the fall, not a bunch of construction equipment.”

Matilda Whitney, Wake Forest senior, is critical of the stemming of foot and regular traffic.

The construction has limited the size of the parking lot, reducing the number of spaces available for students. In addition, the spots along Jasper Memory Lane have been changed to staff/faculty reserved spots, so students can no longer park there.

Senior Alicia Meglio, who lives off campus and drives to class, said the construction is just a mild inconvenience.

“The construction has taken up a lot of spaces, which has really limited parking,” Meglio said. “It’s definitely frustrating in the moment when the lot is full, but it doesn’t bother me that much after the fact.”

Senior Elliott Andrews, who also lives off campus, is also frustrated with the limited parking caused by the new construction.

“I feel like the construction has created a lot of competition to get a spot to park for off campus residents, and it’s also frustrating to see construction equipment signs and trucks taking up spots, which limits the number of spots even more,” Andrews said.

Senior Sarah Repko agrees, and points out how inconvenient it has become to park in that lot.

“They’re building over an old lot so there are fewer places to park and Collins can get really full. Once you find parking behind Collins, you have to walk around the construction site to get to the rest of campus, which takes awhile because they block off sidewalks,” Repko said.

In addition, she said, the cramped nature of the lot plus the limited number of spaces makes the area less safe to park in.

“One day I was backing out of a parking spot and another car almost hit me. I think the car was speeding because they were running late for class since finding parking is so hard, and then having to go around the construction site takes more time,” Repko said.

“On top of that, I was backing out of a space that probably shouldn’t even be a spot because it’s right next to a corner where there’s no visibility for cars that are coming around the corner to see if you are backing out or even walking to your car,” Repko said.

“So the combination of the other driver being in a hurry and me parking in a spot that wasn’t very safe because of limited space led to a near accident. I’m honestly more surprised more people haven’t gotten into accidents there.”

Despite the number of frustrated concerns, students have also voiced that they don’t have a problem with the construction, they just wished that they would have been told sooner.

“I think expanding Wake Forest through building a new dorm is a great thing for campus,” said senior Pearson Lien. “However, I don’t think it was well advertised and I wish that we would have been warned earlier about the construction. I don’t think many people were warned that the road would be blocked and it’s not well marked.”