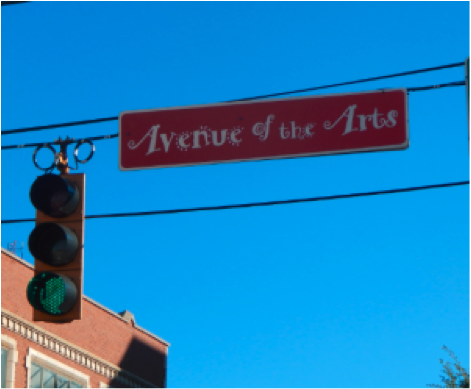 About two years ago, hidden by the darkness of night, two people set out on an expedition to hang wind chimes from the street lamps on Trade Street.

Harry Knabb and Guy Blynn initially assembled this project in secret due to their uncertainty of the reaction from business owners on Trade Street in downtown Winston-Salem.

Now, the wind chimes remain hanging from the street lamps, associated with many more compliments than complaints.

Knabb and Blynn’s wind chimes is one istallation of many completed through Arts for Arts Sake, a nonprofit organization with the intention of enhancing and educating the community through art, according to their website. All of their events are open and free to the public. According to their website, this organization encourages and supports artists and the presence of art downtown.

Knabb described the sounds of the wind chimes as providing a “serendipitous kind of feel.” They also inspire smiles throughout the Arts District of downtown Winston-Salem. The streets of downtown have been musically enriched, according to local business owners.

This Arts for Arts Sake project idea came from Blynn, who died last December. Blynn was inspired to bring this idea to life after he went on a trip to New York City. While on this trip, Blynn heard wind chimes hanging in trees surrounding a restaurant.

The wind chimes were initially installed on Trade Street and have spread to Liberty Street as well, due to popularity within the community.

Each wind chime differs from the next. They dangle at different lengths, are assembled using different wooden shapes and creates distinctive chimes when the wind flows through them.

These chimes also expand the Arts District’s spectrum beyond visual art. Blynn served as Chief Legal Counsel of RJ Reynolds Tobacco Company after acquiring both business and law degrees from University of Pennsylvania and Harvard University, respectively. He was active in the community, serving as a chairman in Bookmarks as well as a board member in Arts for Arts Sake, according to Knabb.A long-time business owner on Trade Street, Tamara Prost, said the wind chimes are “lovely [and] good addition to the neighborhood.” An employee at her store, Claire Giffin, said the chimes are most noticeable in the mornings. “The chimes give off a melodious kind of sound,” Griffin said.

Knabb remains highly involved in arts projects downtown. Being a board of director of Arts for Arts Sake, he has been a huge part of the projects the nonprofit has presented. Past projects include the Arts District Arch Way on 6th Street, a fish sculpture on Trade Street, murals throughout the city and a public art park, among others.

Trade Street business owner Purity Ruchugo said she likes to look out the windows of her store and see people look up and appreciate the chimes, always with smiles on their faces.