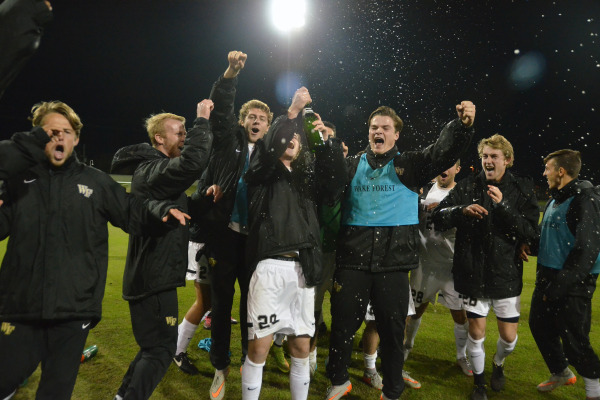 Last Friday in Louisville, Ky., the Wake Forest Demon Deacon men’s soccer team squared off against the Louisville Cardinals. The Cardinals, 6-7-3 on their season and 1-4-3 in ACC play, right off their 1-2 loss against North Carolina, had their second loss in a row.

Both teams would try to end their respective seasons on a good note, with a lot at stake for each team. With a win, Louisville would move out of last place in ACC’s Atlantic Division, while Wake Forest would be able to clinch the ACC Regular Season Title. Wake Forest came to play, though, and with motivation from Head Coach Bobby Muuss, the Demon Deacons won 4-2.

The game was high intensity right from the kickoff, and in the fifth minute, Hayden Partain scored his second goal of the season with an amazing 30-yard shot from the center of the field.

The shot dipped as it was coming in on net and caught the keeper flat footed in his first goal of the night. His second would come in the 11th minute as he slotted home a rebound from Jon Bakero’s shot to make it 2-0.

Wake Forest would continue their domination early in the first half as Jacori Hayes scored to make it 3-0 in the 17th minute as a through ball from Jon Bakero split the defense and Hayes would fire it low past the Louisville goalkeeper.

Louisville was not broken yet, as Cardinal Danny Reynolds scored a header from a corner that hit off inside of the post and in. The half ended 3-1 in favor of the Demon Deacons, but more was still to come.

In the 69th  minute a run by Jack Harrison through the heart of the Louisville defense would see Harrison score his seventh of the season as he slid the ball past the oncoming keeper.

Louisville kept on fighting, scoring a freekick by Tim Kubel 22 yards out that hit in off the left post.

With the win, Wake Forest climbed to 20 points in the ACC table, one more than both North Carolina and Clemson.

Also, Wake Forest’s Hayden Partain, along with Clemson’s Michael Melvin, earned the honor of ACC Men’s Soccer Offensive Player of the Week. The Demon Deacons finish their regular season 14-1-2 with an ACC record of 6-0-2.

Wake Forest will now go into the ACC Championship Tournament seeded No. 1, with a first round bye.

The Demon Deacons will play the ACC’s ninth seed, the Louisville Cardinals, at Spry Stadium on Sunday, Nov. 7 at 1 p.m. The contest on Sunday will be the second game between Louisville and Wake Forest in 10 days.

The Demon Deacons have won their past two games against the Cardinals and will look to continue this trend on Sunday afternoon. Furthermore, the ACC tournament itself will be a crucial test to Wake Forest’s ability to play against some of the best teams in the nation, while also testing the depth of the squad.

To reach the National Championship, as the men’s soccer team did in 2007, the team will have to maintain the consistency it has displayed throughout the year.  With a record of 14-1-2, Wake Forest’s first year head coach, Bobby Muuss, will look to lead his team in the coming weeks and build off of their succeses this year.

Head out to Spry Stadium on Sunday and support the No. 1 men’s soccer team in the nation as they look to continue their brilliance and advance further in the ACC men’s soccer tournament.