Fall boots come in many styles and colors 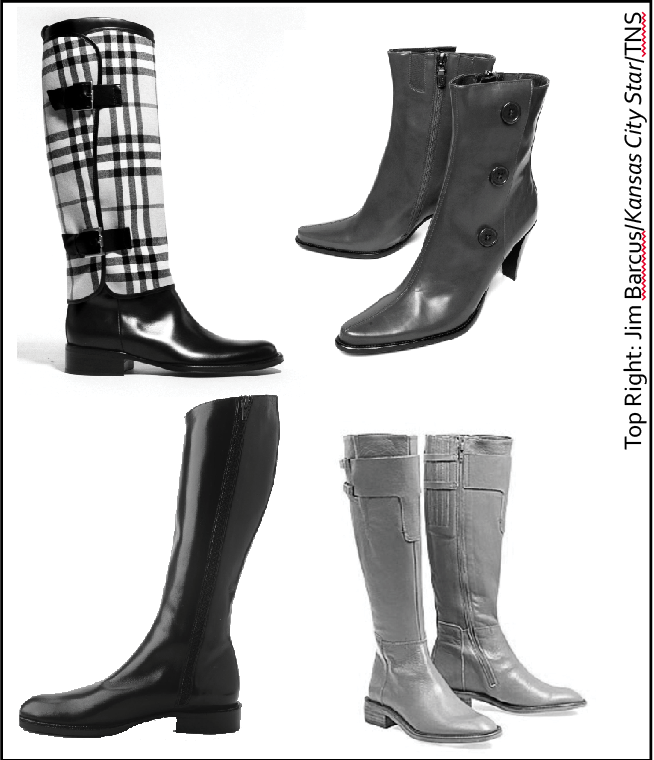 Boots are an important part of fall fashion every year, and thankfully, there are many styles to choose from and many ways to wear them. Since there are so many different types of boots, it’s important to identify a few particularly popular styles.

To start, the combat boot, which is a low boot with laces up the front meant to imitate the look of boots worn in, well, combat, is good in just about any color.

These can add a bit of edge and flair to a cute and girly dress or to the jeans and sweater look. Junior Angela Harper says that in terms of combat boots, she’s a fan of “the Steve Madden ‘Troopa’ boots, with socks that’ll come up over them so that there’s a little bit of color.”Notable versions of the combat boot are ‘Troopa’ boots, and Doc Martens, which come in a variety of colors, patterns and styles.

Cowboy boots are another universally popular style that need very little in the way of explanation as to what they look like.

However, if you’re really curious, think of a much more decorated version of the shoes worn in old Westerns. Cowboy boots can be found in varying heights and colors, and can either be plain or embroidered.

“I love seeing when people get to break their cowboy boots out,” says senior Georgi Carbone-Wynn. “I love my own cowboy boots that are from Old Gringo, because the stitching on the side has beautiful red and yellow roses. And plus they’re sentimental because my dad got them for me for my 18th birthday.”

The fact that cowboy boots make great gifts definitely adds another level of personalization to the style. Really, of all the fall boots styles, cowboy boots are the easiest to make your own.

Rain boots are perhaps some of the most important boots to have in your closet if you plan to spend any amount of time in Winston-Salem during the fall. Thankfully, they don’t have to be the bright yellow wellies you see in old comics and pictures.

Nowadays, there’s an abundance of rain boot looks, and the best part about them is that it really doesn’t matter what you’re wearing with them, since rain boots are meant to be practical more than anything. The fact that they can be super cute is just icing on the cake.

Of the many brands of rain boots that exist, Hunter is arguably the most common at the university.

“I love Hunter boots for the rain,” Harper says, and many girls on campus would probably agree.

The last type of boot every girl here needs to know is the ever-classic riding boot. These are the tall boots that, on some level, resemble boots worn while riding a horse.

They also tend to come in varying shades of brown or black, but they’re very rarely found in non-neutral colors, meaning that these boots most likely won’t be the highlight of a particular outfit.

They do, however, go with nearly any outfit. “I wear either my brown riding boots or my black riding boots depending on my outfit,” says sophomore Rebeckah Pace. “I like them because they are comfortable, warm and look good with sweater dresses and leggings combinations, as well as with jeans and any type of top.”

“I like boots. They go with a lot of things plus they keep me warm and look good with a skirt and stockings or jeans and a sweater with a scarf,” said junior Valeria Malo.

Whether it’s combat boots, cowboy boots or riding boots, there are so many ways to wear boots in the fall. The biggest problem is figuring out which style to choose.