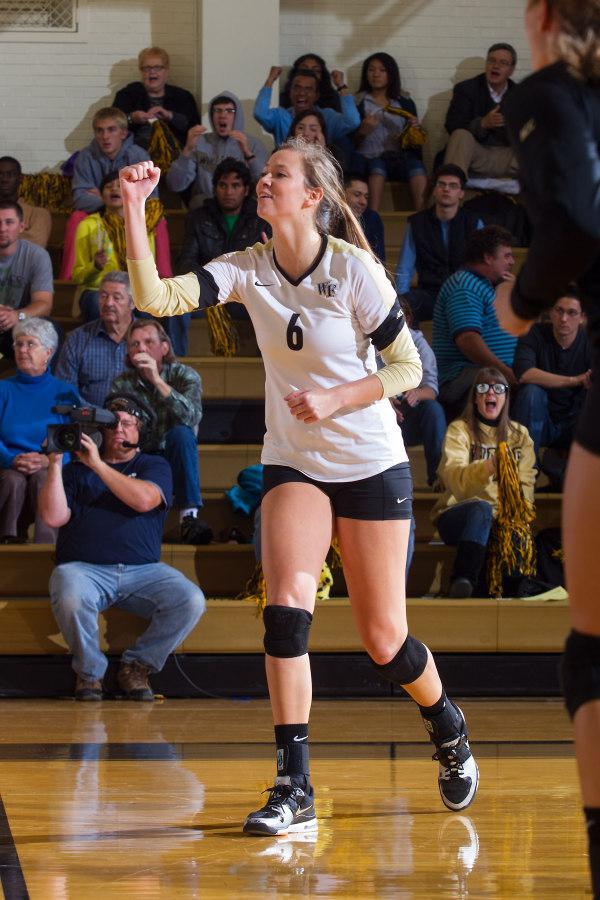 Senior volleyball player Matalee Reed of Dallas, Texas is finishing her third and final season for the Demon Deacons.

After transferring from Pepperdine at the end of her freshman year, Reed has proven to be successful both on the court and in the classroom, boasting two All-ACC Academic Volleyball selections in both 2013 and 2014.

What was it about Wake Forest that led you to choose to come here and play Division I volleyball?

I sort of accidentally wound up here. I originally planned to visit College of Charleston, and then we were just going to stop by Wake Forest, but I wasn’t that interested.

Eventually we drove up here, and I fell in love. I literally left campus sobbing because I was so happy to have found such a perfect place. I loved the location, the enclosed and small campus, but it also felt big. I loved the volleyball program and the girls on the team. The ACC is also such a cool conference. The academics are an obvious plus. With amazing professors who constantly go out of their way to help you in your learning experience.

How have you been able to balance being both a student and an athlete?

Balancing being a student and an athlete is tough, but it’s something that you become very used to and you continue to get better at it. You just have to know how to prioritize and manage your time. I also think you need to be able to stop and set everything down, and take a moment to just relax. It can get very stressful and exhausting at times, so sometimes it’s nice to just take a break and go out for ice cream, or just be with your friends in order to wind down.

Tell us about your journey to becoming a Division I athlete.

I originally started playing volleyball because of a woman named Betty Moore. She was my elementary P.E. teacher and she kept hammering me that I would be good at volleyball.

Throughout junior high and high school I had a lot of friends who acted like being into sports and being good at sports was a bad thing. She was always there to remind me to never give up on it. She died in 2012 from breast cancer, during my first semester as a college athlete.  I honestly owe it all to her, or I would’ve never had any of the opportunities that I have had.

I love how much of a team sport volleyball is, and I think that is what kept me playing.

You can’t do anything in the sport without at least one other person. Playing in games, obviously requires six or more. It’s a pretty amazing thing to get to see a group of people work so hard each week, to be able to perform it on the weekend and be successful.  I love that feeling and having that feeling with all of my best friends. Win or lose, the sport as a whole just brings people close together.

Does the team have any traditions that you will miss?

I think I will honestly just miss being a part of a team. I know they will always be my family, but being on an actual team has been a part of my life since I was 12 years old. So losing that is going to be so tough.

It’s little things like sitting in the locker room with them or cheering them on during sprints. Those are the things that I will miss getting to experience.

How has your final season playing for Wake Forest gone so far?

The season hasn’t gone how we have wanted with wins and losses, but as a team we have grown incredibly close. Each week we continue to work on different focuses to reach different goals, and so far that has been successful in our eyes.

We’ve worked really hard since July on making this experience the best for each player and now looking back at it in November, I feel that as a team we have really exceeded that goal.

What has your experience as a team captain been like?

Who has had the largest impact on you as an athlete throughout your career?

I think the team itself has had the greatest impact on my career as a student athlete at Wake Forest.

They are the people that I get up for during those 5 a.m. workouts or those long practices. They make every day something exciting. It sounds super cheesy and cliché, but these girls are my best friends and I really couldn’t imagine playing without them.

I played at a different school my freshman year and the team dynamic was entirely different. Coming to Wake Forest and being with these girls has truly showed me how special of a team this is and how important all of their friendships are.

What has been your favorite thing about being a Wake Forest athlete?

The best part of being on the team for the past three years is being able to watch it change and grow. You love each team with the different people, but it’s always exciting when the new freshmen come in and the dynamic shifts a little bit. I will honestly miss getting to see them every day. I think during season we take it for granted because we are literally with each other every single day for five months. But I will miss being around them and the sport and being able to compete with them.

What do you plan to do after graduation?

To be honest I’m still a little unsure of what I want to do after graduation. I’m keeping my options open as long as possible. I know eventually I want to go to graduate school, but I also would like to work and find out what I’m passionate about.

I’m a communication major with a concentration in media studies. I think eventually in life I may have something to do with volleyball, but after the season ends I think I will need some space from it, just because it’s been with me for the past 10 years. It’s time for something new.