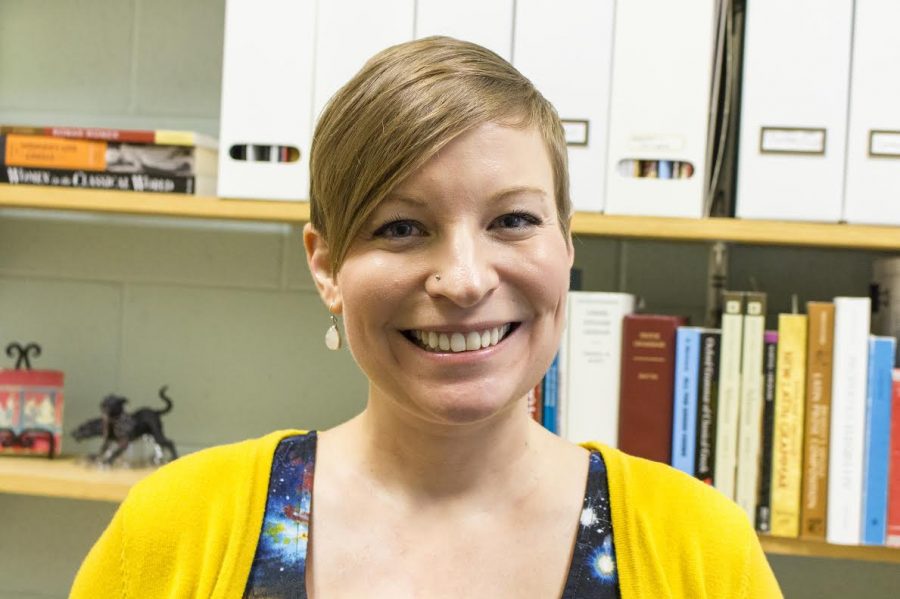 Latinist Dr. Serena Witzke is in her first semester as a professor in the Classics Department at the university, specializing in gender in antiquity and ancient new comedy.

She has several publications set to be released this year, including several Latin and Greek translations of ancient comedies to be published in English in a press series and articles on sexuality and violence against women in antiquity and in ancient plays.

Next semester, she will be teaching several courses, including Women in Antiquity, Intermediate Latin II and Advanced Latin. She also has plans to work with the Theatre Department on their spring performance of A Funny Thing Happened on the Way to the Forum.

How long have you been teaching?

I taught at Ohio Wesleyan last year. That was my first year as a full Ph.D. scholar out in the world teaching undergrads.

I went to UNC for my Ph.D. and you have to teach every year while you’re studying there as kind of a practice to learn how to teach so you don’t get dropped into a university and have no idea what to do.

I did seven years of teaching there and two years before that, where I was doing my master’s degree at the masters at Hamilton, so I already have 10 years of teaching experience. It’s good training when you get to do that as a grad student.

What kind of classes were you teaching then?

Sometimes I was a teaching assistant — occasionally doing lectures and being the underling, right-hand man of your faculty advisor who’s actually teaching the class.

But after a couple of years, especially at UNC, they say, “well, you’re going to have to do this eventually, get out there!”

So they give you your own class, I’ve been teaching Latin for years on my own, and it’s nice not to have to do any prep.

When you started school as an undergrad, did you intend on becoming a Classics professor?

I think my parents probably would’ve preferred that I do something more practical as an undergrad; they were like, “what are you going to do with Classics?” And I was like, “Mom, it’s not about what you’re going to do with it!”

After a couple of years though, I thought, oh no, I have to do something with this! But, you know, I really didn’t want to do anything else, because I loved Latin, I loved Classics, I loved mythology. Luckily, I did have instructors by that point that said, “if you’re going to major in classics, maybe you should think about grad school, and if you go to grad school, then you can teach this.” I thought, okay, I can stay and do this forever. I like that.

What would you say you like most about teaching?

Honestly, Classics is hard for some people to get behind as a major, because some people wonder how it’s actually relevant to anything that they’re doing. One of my favorite parts of teaching Classics is figuring  out how students can relate it to the real world.

We hear, maybe, Fox News talking about Hillary Clinton as a harpy who shrieks out whenever she’s talking, and some of the rhetoric that is used about Hillary Clinton is the exact same rhetoric used about Fulvia, the wife of Antony, in the ancient world when she dared to stand up for her husband when he was out of town and ran the army herself, or the wife of Augustus, Olivia, who apparently had “too much power behind the scenes,” sort of like a Bill and Hillary Clinton situation — who really has got the pants in the family? Looking at these ancient ideologies against the modern ones, you realize things don’t actually change that much.

How would you describe your teaching style?

I’ve read a lot of pedagogy studies — we’re all supposed to read about how to teach —and in the last ten years or so, they’ve really stressed “active learning.”

When I was a first year, for my Latin class, for instance, we shuffled into the room, we sat quietly at our desks, and then the professor pulled out the book, opened the book and began reading the book. He read to us out of the book for about 45 minutes, and then he’d look up and look around the room and say, “You! Translate!” You hadn’t really learned anything yet, you’d just been listening to him reading out of the book, and I was terrified of coming to class! I skipped that class all the time because I was terrified that I was going to get called on and look stupid.

Instead of me talking at you for 50 minutes, you tell me what you found relevant. My students teach me what they’ve learned, and then we can do sentences together in class. I would say that’s really important to me, more of a dialogue with students

I try to wear a different patterned dress every day — I can get through most of the semester without repeating, and I’ve got one with dinosaurs, and it’s really hard to be intimidated by the girl in the dinosaur dress, right?

If you could teach any class, what would its subject be?

I have a specialty in ancient new comedy, which is sort of like the birth of the modern sitcom. Boy loves girl, boy can’t get girl, boy needs to enlist clever guy to help him get girl — Shakespeare ended up adopting a lot of these plots for his plays, and I wrote my dissertation on how Oscar Wilde used these plays in writing his plays.

I have a class that I’d like to teach at some point called the Heritage of New Comedy, where you’d start by looking at ancient comedies, which are really dirty — lots of swearing, lots of sex workers walking around — and then you’d move to Hrotsvitha, who was this nun in 10th century Germany who takes these stories and turns them into something that’s appropriate the other nuns she’s working with can perform.

From there we move into Shakespeare and Oscar Wilde and into the modern day musical and the sitcom. There’s definitely a tradition there.

You might not realize, but when you’re watching Modern Family, you’re actually seeing a genre that’s been developing for 2,000 years. It’s kind of cool.

Now that the semester’s almost over, what’s your favorite thing about being at Wake Forest?

I ask students who are taking these classes not to just to think about [Latin and Greek] as dead languages but to think about them as living, breathing, relevant experiences and the students here are really good about doing that. My students here are very clever, and frequently they’ll say something about what we’re reading and I’ll think, wow, I hadn’t thought about that before.