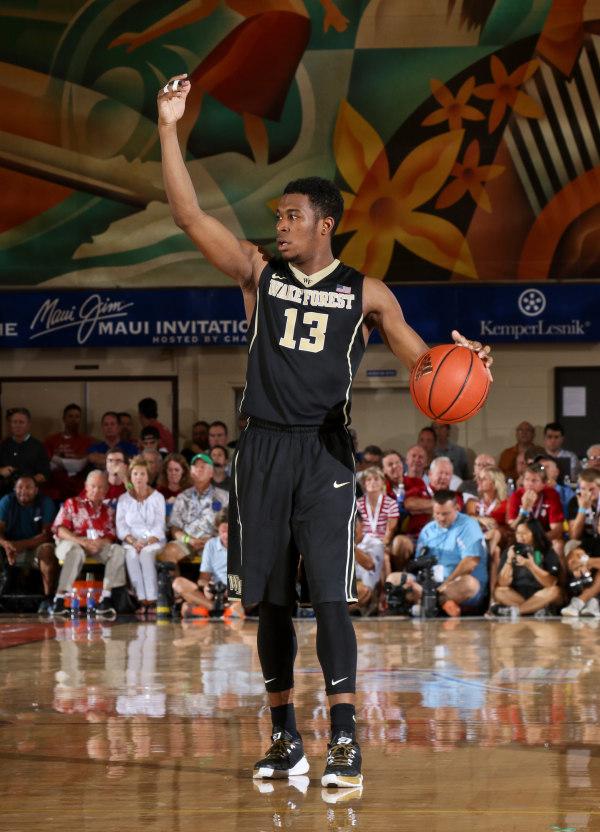 Facing injury, suspensions and even illness, Wake Forest has managed to win five of its first seven games of the season, including wins over No. 13 Indiana and UCLA in the Maui Jim Maui Invitational and Rutgers in the Big Ten/ACC Challenge.

Yet, amidst success, the Deacs are far from satisfied. “To come to this tournament [Maui Invitational] and walk away with two wins is not exactly what we wanted,” coach Manning said after defeating UCLA in the tournament’s third place game.

“We stepped on this island and wanted to win the tournament. So the next best thing for us is to come away with two wins.”

Wake Forest began its quest to an improbable Maui Invitational run on Monday, Nov. 23, overcoming a nine-point deficit late in the second half to upset No. 13 Indiana. Carried by senior Devin Thomas with 21 points, eight rebounds and three assists, the Deacs were able to put themselves in a position to win the game in their final possession.

Thomas scored 13 of these points in the second half, making up for the fact that only three other Demon Deacons scored in the game’s final 20 minutes.

One of those three players was freshman Bryant Crawford, who scored the game-winner for the Deacs.

“[Coach Manning] just told me to get to the hole, and that’s what I did,” Crawford explained after the game.

Crawford drove to the basket with seven seconds remaining and shot the ball high off the glass to give the Hoosiers their first loss of the season.

“Indiana is one of the best teams in the country,” Manning said of his team’s 82-78 victory. “For us to get the win in the fashion that we did with having to grind it out late and guys had to make plays, that’s something we can lean on down the stretch in the ACC play.”

Following the win against the Hoosiers, the Deacs moved on to the winner’s bracket to face No. 19 Vanderbilt on Tuesday, Nov. 24.

Unfortunately, Wake Forest failed to play with the same level of energy as it did the day before and fell to the Commodores 86-64 in a game in which they never led.

With the loss, the Deacs eliminated themselves from the opportunity of facing coach Manning’s alma mater in the title game (Kansas). The Deacas played in the third place game against UCLA, instead.

Wake Forest took two steps forward with the return of Cornelius Hudson and Rondale Watson but took one giant step back when freshman point guard Crawford came down with flu-like symptoms moments before tipoff.

Without Crawford and senior Codi Miller-McIntyre, the Deacs significantly lacked depth and experience at the point guard position.

In their absence, shooting guards Mitchell Wilbekin and Cornelius Hudson brought the ball up and took on a greater workload combinging for 31 points, eight assists and 10 rebounds.

“I just did whatever Coach asked me to do,’’ Hudson said of his return. “Unfortunately we missed Bryant, our key point guard, so someone had to step up handling the ball, so that’s what I did.’’

The Deacs took the lead halfway through the first half and never looked back, claiming the victory 80-77.

Finishing the tournament 2-1 served as a significant confidence boost for the Deacs, who used it to walk away victorious on the road in the Big Ten/ACC Challenge against Rutgers.

Wake Forest managed to play its sloppiest and least physical game of the season and still managed to win.

Even though Rutgers is not by any stretch of the imagination a marquee Big Ten Basketball program, it’s encouraging that the Deacs can pull off a win, even when playing one of its least impressive games of the season.

While it’s imperative that the Deacs continue to improve, preventing future unimpressive performances, Wake Forest fans can see the road victory over Rutgers as a good thing — proof that the program is headed in a positive direction.