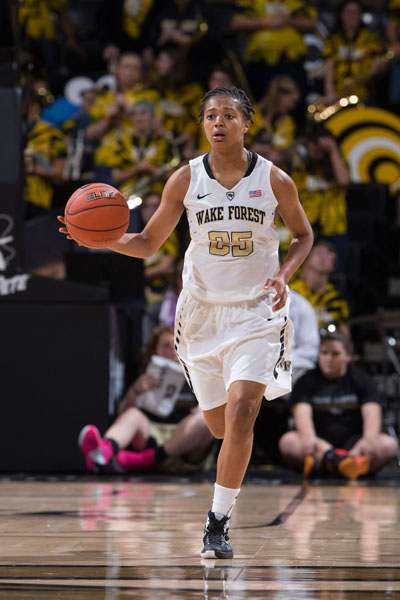 While the Wake Forest women’s basketball team has fallen on hard times in recent years, the most recent crop of freshmen is looking to change that.

What made you choose Wake Forest?

I chose Wake Forest because of the atmosphere. The amount of support that you can get here, whether its from your teachers, coaches or teammates, you won’t get anywhere else.

Where else were you recruited?

I’m from Virginia, so I was being looked at by the University of Maryland, Virginia Tech and VCU.

Was ACC Basketball always the goal from the beginning?

When I was in the eighth grade, I never thought I was good enough to play Division One basketball. Then I started getting letters, and once those came, ACC became the goal. Once I started getting looks from Virginia Tech and University of Virginia, I knew anything was possible.

You’re the leading scorer of this team as a freshman. What has allowed you to blossom on the offensive end this early on in your career?

There’s a pretty balanced scoring dynamic on the team this year, with a lot of players coming in at around 10 points per game. Is that a chemistry or play style thing?

We’re all very selfless. If someone has a better shot than I do, that person is going to get the ball and get the best shot, because that’s what is best for the team. I think that’s what has allowed us to be pretty successful thus far.

How has the chemistry of this team grown throughout your time here at Wake Forest?

We all get along very well, and as the season goes along, we’re going to get better and better. That’s an amazing thing to watch happen.

You have had a pretty strong start to the season, with only one loss to date against Missouri. Any thoughts on how you’ve been able to win five out of your first six?

We’ve just been playing hard. That’s something that coaches can’t necessarily coach, but with us playing hard and the coaches being able to teach us what they need to teach us, that comes together for success.

How have the older players helped you acclimate on and off the court?

What would an example of that on-court advice look like?

There’s a lot of terminology that freshmen don’t understand, and seniors like Kandice Ball and Ataijah Taylor will make sure we understand what the coaches say.

How has the transition been from high school to college basketball?

The transition from high school has been great. I think playing AAU has helped me a lot by playing against greater competition, but if I didn’t play AAU, I don’t know if I’d be able to compete at this level.

What has the toughest part of the transition been?

The toughest part of college basketball itself is there is so much more than basketball. You have college, time-management, being away from your family and you just have to learn to control all of that.

How has Coach Hoover helped so far?

Coach Hoover is great. If you need anything, she’ll do her best to get it done. I wouldn’t want to play for anyone else in the country.

What are your goals for this season and beyond?

I just want to help the team in any way that I can. Whether they need my help defensively or scoring, I want to do whatever I can to help this team be successful. On a personal level, I’m just looking to change the legacy of this program. I think that the freshmen coming in want to leave a new legacy behind. We just want to change the culture, and when we come in, we don’t want people to ask us ‘Why Wake Forest.’ If someone chooses to come here, people should already know that they chose Wake Forest because it’s a great place to be.