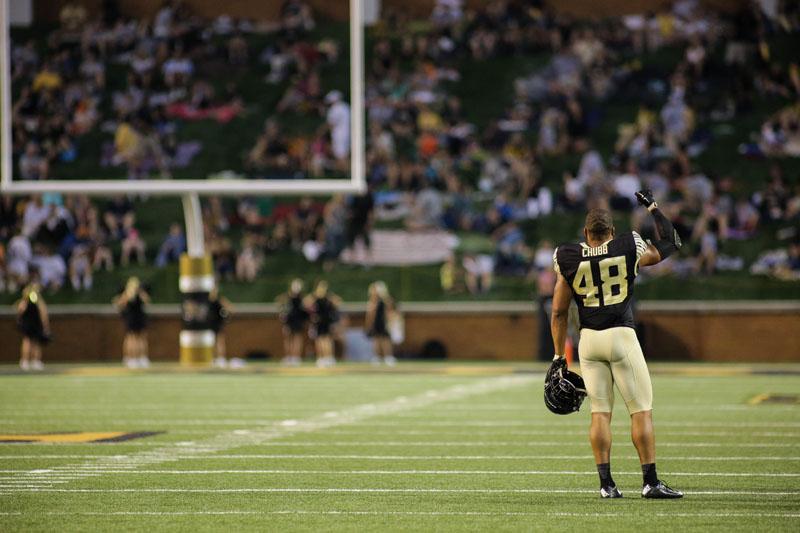 As has been the story of the Wake Forest football program in recent years, the Wake Forest Demon Deacons fell just short against in-state rival Duke 27-21 on Saturday at BB&T Field.

“I think today was almost our season in a nutshell,” said head coach Dave Clawson. “I think from the opening whistle at Elon to the final whistle in the Duke game, our kids played extremely hard and with great effort and never quit and had incredible physical effort and resiliency all year.”

Wake Forest outgained the Blue Devils in total offense, 450-431, and entered the second quarter locked 7-7 with Duke in what appeared to be an even matchup. Unfortunately for the Deacons, familiar demons doomed them in their season finale.

“In another game where we outgained our opponent… to lose like we did, it’s three turnovers to nothing and we gave up the two explosive plays for two touchdowns,” Clawson said. “We’re just not quite there.”

Wake Forest has had trouble forcing turnovers all season, and despite an improved offense under quarterbacks John Wolford and Kendall Hinton, their defensive struggles have prevented them from winning games.

Wake Forest entered the fourth quarter down 24-7, looking at another blowout loss at home. Under Wolford, however, they manufactured two touchdown drives in the last 15 minutes, in between a Duke field goal. This pushed the score to 27-21 with under two minutes to go.

Wake Forest attempted an onside kick after their second touchdown of the fourth quarter, but it was unsuccessful.

Though Wake Forest lost, a number of seniors had fantastic performances in their final game suiting up for the Deacons.

Linebacker Brandon Chubb had 11 tackles on the day, placing him at 10th all-time for tackles in Wake Forest history. Punter Alex Kinal became the first punter in NCAA history to reach 14,000 total punting yards with a total of 14,102, and added to his NCAA record number of punts, which stands at 337.

Next season will be the first in which Wake Forest will truly be expected to improve their record, and Coach Clawson could be on the hot seat if he can’t notch at least a .500 season

“We would love to be able to show a better record than this year because I think we are a much-improved football team,” said tight end Cam Serigne. “Internally we see the progress, but it is hard for us since losing leaves a bad taste in our mouths. It is just about trusting that process and knowing that we are a better football team.”

The problem with constant resiliency, however, is that it doesn’t guarantee wins. At this point in Clawson’s Wake Forest career, he owns a 6-18 record, good for a .250 winning percentage. While Wake Forest has statistically improved on offense this season, the identical 3-9 records of this season and last season haven’t showed the level of improvement that fans expected from Clawson and his staff.

Wake Forest has lost four games by one score or less, but a better record is a concrete way of showing progress, and Clawson will need to produce concrete results in the 2016-17 season to satisfy the Deacon faithful.

The good news is that this year’s freshman class set a record for freshman receptions with 131, breaking the previous record of 77 set by the 2014 class. That kind of performance will need to continue next year if the Deacons are looking to take the next step in terms of production on offense.

“We have guys that we are counting on who are getting older and more experienced,” Chubb said. “We’re going to see a more intuitive offense with more rhythm. Clawson said we went from a bad team to a competitive team this year, so you will see offense and defense feeding off of that momentum.”

That elusive offensive rhythm will be crucial next year, especially since the 2015 campaign did not produce a true No. 1 quarterback.

Both John Wolford and Kendall Hinton had a number of strong performances throughout the year, but neither established himself as truly more dangerous than the other when running the offense. Hinton wasn’t active against Duke, but if he had been, Clawson would have used the quarterbacks in tandem as he has been all season.

“Kendall, if you go back on the season, was probably our most explosive playmaker,” Clawson said. “To take arguably the best athlete in the game away never helps. Who’s to say how different it would be?”

The Demon Deacons will need to step up on both sides of the ball in 2016 if they want to reach a bowl game, especially with two All-ACC selections graduating in Brandon Chubb and Alex Kinal. Wake Forest will need to replace a substantial amount of talent to change the tide of the program.