The new biopic from filmmaker Aaron Sorkin tells the true story of Vietnam ware protestors, known as the Chicago 7, on trial for inciting riots 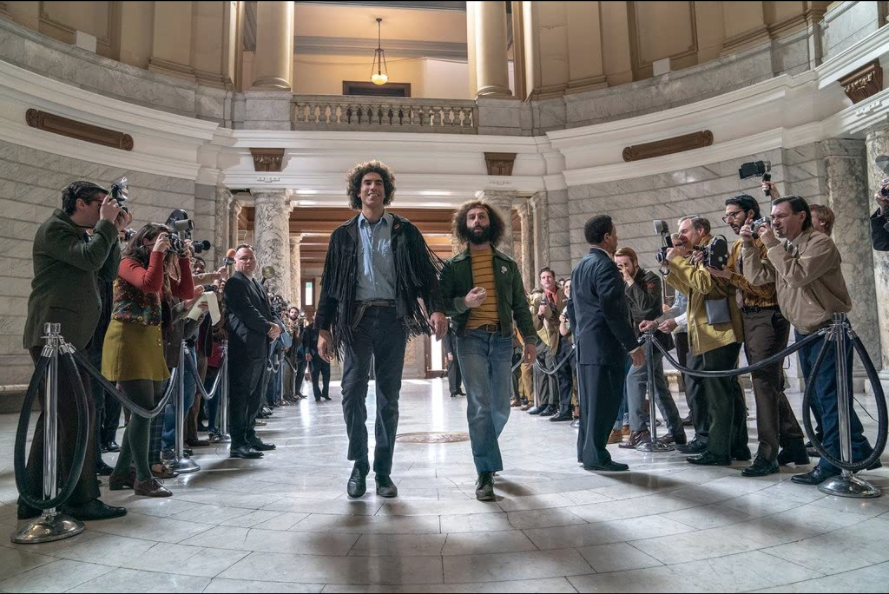 The late 1960’s were some of the most politically charged years in American history. With protest movements against the Vietnam War, the start to President Richard Nixon’s infamous reign in office and the assassinations of several figures like Bobby Kennedy and Dr. Martin Luther King Jr, there was nonstop unrest and conflict. The recently released Netflix film, The Trial of the Chicago 7, captures just a small, but important part of this era.

Months after crazy protests against the war during the 1968 Democratic National Convention in Chicago, eight leaders from various organizations were indicted on conspiracy charges and for inciting riots. Among the defendants were Abbie Hoffman, Jerry Rubin, David Dellinger, Tom Hayden, Rennie Davis, John Froines and Lee Weiner and Bobby Seale. These figures come from groups like the Youth International Party (Yippies), the Fifth Avenue Vietnam Peace Parade Committee and the Black Panther Party, all of which were under heavy surveillance by the government. It was obvious from the start that this trial was a show trial put together in order to make an example of these eight men. The Trial of the Chicago 7 is the second directed film by Aaron Sorkin, who is known for his work writing The Social Network, Moneyball and Steve Jobs.

The narrative of this film succeeds in holding interest, introducing exciting turns throughout. On the surface, The Trial of the Chicago 7 is a courtroom drama that tracks the major events of this month’s long trial. Woven into the courtroom events, we see the defendants try to argue their strategies and most importantly, are introduced to how they got into this situation in the first place. The trial events were fascinating. Every cast member made a mark on the film during these scenes and the tense buildups towards important decisions that affected the case were handled extremely well. The court scenes had outstanding performances as well, such as Frank Langella’s performance as Judge Hoffman. This judge was just the right amount of annoying that was needed to show how corrupt this event was.

Going further into the casting, another shining moment was Yahya Abdul-Mateen II as Bobby Seale, who absolutely stole the show for the first half of the movie. Although Seale, Chairman and Co-Founder of the Black Panther Party wasn’t even a part of the Chicago 7, he was tacked along the case in order to make the case more convincing with a Black man involved. Yahya stole the show several times and forced the film to struggle over if they even wanted to involve him as much as they did due to his case eventually being separated from the rest. Joseph Gordon Levitt makes a comeback performance as the lead prosecutor Richard Shultz. Mark Rylance, who played the defense lawyer William Kunstler was excellent as well, but the most surprising performance came from comedian Sascha Baron Cohen, who played Abbie Hoffman of the Yippies. Seeing Cohen in a serious role is a rarity, and he knocked it out the park.

This story was captivating and is all too timely for current events surrounding protesting and fights for democratic rights. There are several appalling cases of corruption and abuse of power throughout this film, all of which are necessary for further study into how the U.S operated at the time and respecting those who risked their lives fighting for justice, whose histories were marginalized for years because of it. The transition of power between Lyndon Johnson and Richard Nixon came at the expense of the Chicago 7’s freedom. The Nixon Administration tried their best to make sure this trial was as fixed as possible. Viewers were also reminded of horrifying crimes committed by the government and police, such as the targeted assisassination of the Chicago Black Panthers Chairman, Fred Hampton.

Although the narratives, messaging and casting were strong, the actual portrayals and writing of historic figures and revolutionaries were less than desirable. The most flagrant of these portrayals was Abbie Hoffman, a real like anarcho-communist that was softened down to an average hippie for the film. In his big moment on the witness stand, Cohen recites fairly nice, but strong statements like “I think the institutions of our democracy are wonderful things that right now are populated by some terrible people.” The real Hoffman would have never said something like this. In fact, in his actual testimony transcript from the trial, he says, “For people to make demands of the Democratic Party is an exercise in wasted wish fulfillment. If we have a demand, it is simply and emphatically that they, along with their fellow inmates in the Republican Party, cease to exist.” Along with that, he called for the release of Black Panther founder Huey Newton, the liberation of African Americans in the country, abolition of prisons which would be replaced by rehabilitation centers, and legalized drugs, amongst several other demands. Hoffman did not believe in the government and resented it, which renders Cohen’s portrayal inaccurate.

Another example of these portrayal inaccuracies was Kelvin Harrison Jr. as Fred Hampton. If it were not for the subtitled prompts of who he was, it would be a toss up on who he was playing. He didn’t really look like Hamapton, wore none of Hampton’s most popular clothing and didn’t have the composure or voice of the revolutionary leader. This is the effect of Hollywood’s odd refusal to get down and dirty with revolutionary figure’s true beliefs. Although it had no consequence on the interesting premise and engaging narrative, it harshly weakens the audience’s true understanding of these events and figures.

Overall, The Trial of the Chicago 7 is a fantastic story filled with great performances that are sure to gain awards season nods. In fact, it almost feels like it could have benefited more from more lengthy background stories and courtroom action as a miniseries. Even with its character and historical flaws, it is worth the watch.