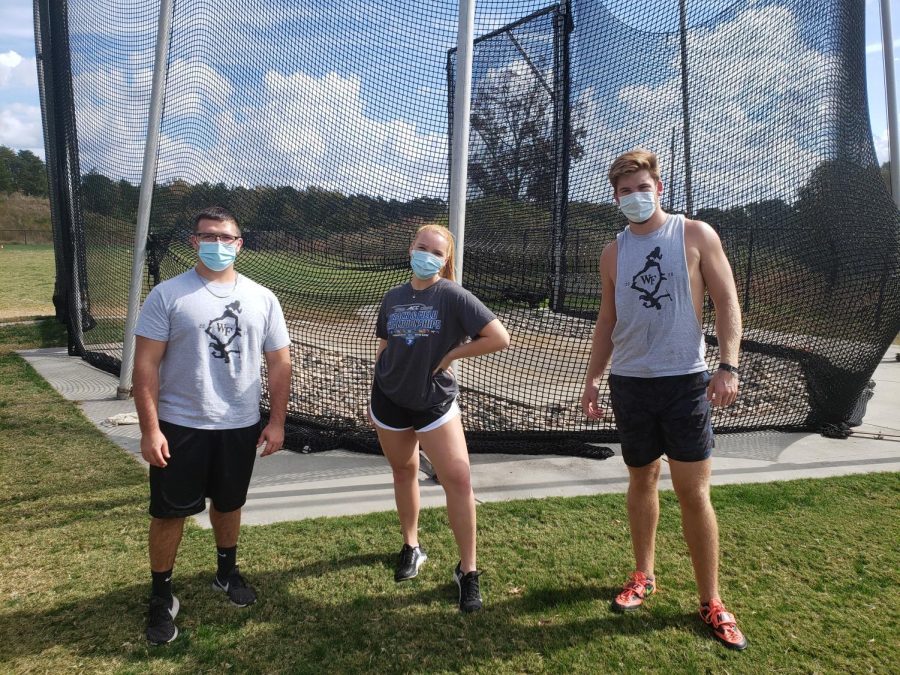 Jason Wagner is a thrower on the Demon Deacons’ Track & Field team. He participates in the shot put and hammer throw events during both the indoor and outdoor track seasons. A sophomore from Collegeville, Pa., Wagner was named 2019’s Mid-Atlantic Athlete of the Year by USATF. Wagner held the Perkiomen Valley High School school records for shot put, hammer and weight throw. Wagner competed in six meets last season where he posted season-bests 13.28m in the weight throw and 13.62m in shot put before the outdoor track and field season was cancelled in March. Old Gold & Black writer Cooper Sullivan spoke with Wagner to discuss last year’s hectic season and what this upcoming season will look like for the athletes on the Wake Forest Track and Field Team.

Cooper Sullivan: How did you get into throwing?

Jason Wagner: I started in the fifth or sixth grade, quite honestly because I wasn’t very good at baseball. My dad threw in high school so he’s like “hey let’s try this out” and that’s how I started throwing shot put and discus. As I progressed, I picked up the javelin, and in my junior year of high school, I started throwing the hammer. Now here at Wake [Forest], I throw hammer and shotput.

CS: Last year was your first year at Wake Forest and you had to adjust to the collegiate athletic scene. What did you learn last season that will help you improve this year?

JW: Last season I definitely learned that every competition is going to be a lot tougher than those in high school. At those events, there’s really no competition until you get to the state or national level. Here it’s a different atmosphere. Today I’m definitely more mentally prepared than I was last year.

CS: Do you have any team or personal goals for this year?

JW: As a team, we want to try to bring everybody to [the ACC Championship] and hopefully all earn team points. Personally, I want to earn some points in the hammer and try to get there in the shot put as well.

CS: Do you feel like the team has a real shot of bringing the ACC Championship back to Winston-Salem?

JW: I do. Compared to the past few years, this year the team is definitely better in almost every single event. We also feel like we are more well-rounded as a team than in years past. We can definitely move up our rank in the ACC compared to past years, but this year we are going to be a lot more unified as a team and hopefully be able to bring in more team points.

CS: Last year, the season was cut short. You didn’t have an outdoor season at all. And, some schools across the country cut their Track and Field teams, including Brown University and Appalachian State University. Did you ever feel that Wake Forest was going to follow suit, and did you ever have concern for your track career?

JW: There’s always a concern with track and field not being a major sport like football or basketball, and that is definitely more concerning now. Recently, I think Minnesota cut their men’s track team, and they are a Power 5 school. So that’s a bit more concerning than a Big Ten program and worrying for us as an ACC program. With that being said, the amount of teams that Wake Forest has makes us a little more secure as a whole.

CS: You haven’t competed since mid-February. How do you think that this substantial time off is going to affect you in your first meet?

JW: I think all the time off gave my body good time to do a reset. I was able to get in very good shape during quarantine, and that will help me as I prepare for upcoming meets and will also allow me to recover faster in the future.

CS: COVID-19 has affected how athletes can prepare themselves. How has the track team been affected?

JW: We can’t all always be together. In the weight room, we are more spread out. We have to be more spread out during practices as well. We are kind of lucky with being the first group [at practice], and there are only about a dozen of us so we don’t have to split up into two separate groups for all of our practices. We are able to get things done faster and in a more unified way now.

At the same time, we are kind of anxious about this indoor season because we’re not too sure if it’s going to end up happening because it’s hard to have 200 people inside one building.

CS: What are you most excited about for the upcoming season?

Editor’s note: [University of Minnesota Board of Regents voted 7-5 to drop the men’s indoor track team on Oct. 9, per Sports Illustrated]