In the first event of the annual series, Pulitzer Prize winning columnists Peggy Noonan and Eugene Robinson discuss the election 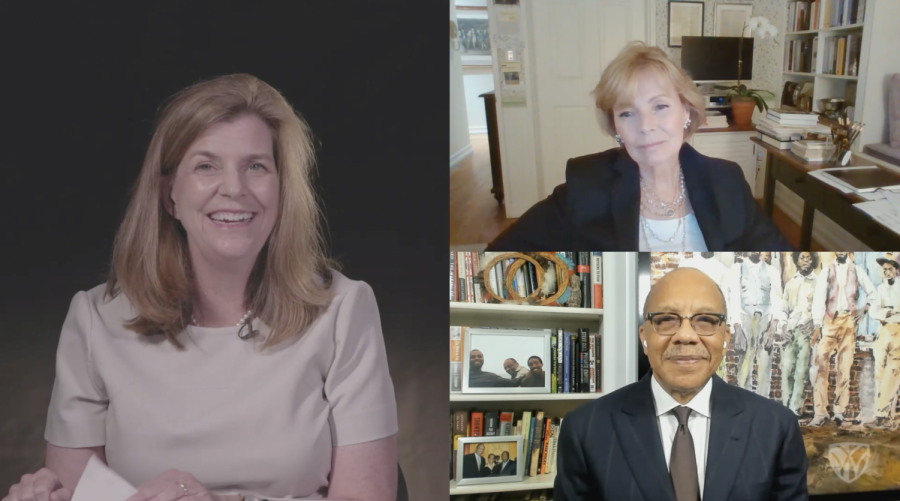 Though the Face to Face Speaker Forum event on Tuesday was in fact not face-to-face, the live virtual discussion between political columnists and authors Peggy Noonan and Eugene Robinson, moderated by Dean of the College Michelle Gillespie, was captivating nonetheless. Noonan and Robinson were asked to come in a bipartisan way to speak specifically about the history of the American presidency, our democracy and how it appears to have evolved this election season.

Noonan, an Irish Catholic from New Jersey who grew up in a family of staunch Democrats, shockingly realized later in life that she identified more closely with Republican ideologies. She has written the weekly column “Declarations” for the Wall Street Journal since 2000.

An aspiring architect, Robinson grew up in Orangeburg, S.C. in the wake of the Jim Crow era. While studying at the University of Michigan, he discovered his talent for writing. He writes a twice-weekly column for The Washington Post.

As the Presidential Endowed Professor of Southern History, Dean Gillespie asked pointed questions to each guest, which focused on current political divisions, the president’s tweeting, the future of presidential debates and the upcoming election.

In addressing deep political divisions, Noonan and Robinson recounted a time when “political identity was only a part of you, it wasn’t you.” Noonan reminded the audience that Americans have loved arguing about all aspects of politics since the founding of the nation and stressed that as our country moves in a more secular direction, politics have begun to take the place of religion in conversation.

Robinson attempted to put this period of political division in historical context. He urged the audience to recount other historical periods of heightened divisions within the country and emphasized that we are currently experiencing another one of those periods.

“We are on a new axis and until we define it, everything looks scrambled,” Robinson said. He explains this confusion is made worse by a president who heightens contradictions and who doesn’t know how to embrace those who disagree with them.

As a former speechwriter for Ronald Reagan, Noonan reflected on President Donald Trump’s preferred mode of communication: Twitter. She said his unfiltered comments “make people nervous” and show that he doesn’t take the office seriously or with the appropriate gravity. She described it as continually shocking that he is so “frivolous and immature” with his words. Robinson echoed this sentiment, saying that no president has ever been as cavalier with his words as has Trump.

“This is a president who doesn’t care about that,” Robinson said. “We knew who he was when we elected him. He was a celebrity. People thought the office would change him, but he approaches every day like an episode of reality TV. ”

“[The Presidential Debate Commission] did itself some damage as it attempted to control Trump,” she said.

She feels strongly that debates are a productive exercise and are beneficial in that incumbents are challenged in a way they haven’t been throughout their presidency. However, Noonan implores the commission to review the structure of debates and calls recent debates “boring” and “formulaic.” Robinson agreed, emphasizing that just because we’ve always done something a certain way does not mean we should stick to that for the sake of continuity.

“I’m not willing to give up on the idea of presidential debates, although I can’t imagine what the one on Thursday will tell us that we don’t already know,” he said. He is referring to the final presidential debate airing Thursday, for which the debate commission has implemented a new rule. The commission will mute the opponent’s microphone when they are not speaking in order to avoid screaming matches that plagued the first debate.

With less than two weeks until the presidential election, Noonan admits she remains concerned about the results and the societal problems that may grow around a long, undecided election. Experts predict the large number of absentee ballots will delay election results.

“I hope that if Donald Trump loses, that he is just historically gracious about it,” Noonan said.

Robinson noted that there is a possibility we will receive results quicker than anticipated, especially if one candidate produces a decisive win. However, if it comes down to votes in one state, like the 2000 election did with votes in Florida, Robinson says “all bets are off.”

“There will be several hard days after the election, no matter the outcome,” Robinson said.

Both speakers were careful to assure the audience that no matter how turbulent this time feels, it will pass, as do all turbulent periods in American history. However, that doesn’t take the attention and importance away from this high-stakes election.

“I care about democracy because it’s what we have and we have to make it work,” Noonan said.

This discussion was part of a larger set of events scheduled in accordance with the Face to Face Speaker Forum, the brainchild of Hatch.

“It was his vision to create this signature speaker series for the Wake Forest community and the greater community where Wake Forest resides,” said Sue Henderson, the Executive Director of the Speaker Forum. According to Henderson, all the proceeds from Face to Face will fund need-based scholarships.

Henderson was the leader of a team of three that worked to establish the speaker series, which operated in collaboration with University Advancement, specifically the Office of Communication and External Relations. However, the series is an initiative from the Office of the President.

Face to Face is a recurring annual series in which the university aims to host three to four speakers that help to bring attention to one of four key categories: political affairs, social justice and global issues, arts and culture and innovation and business.

“We like to say that those are sort of our four pillars, where we would bring in speakers that would fit one of those focus areas,” Henderson said. According to Henderson, the ideal guest is “somebody that has the ability to speak in a compelling way about a matter of substance.”

While students, faculty and staff at the university as well as other institutions of higher learning in the Winston-Salem area can access the events for free, community members have the opportunity to subscribe to the series or purchase single tickets 60 days before the event. To date, the series has over 500 subscribers.

“Our goal was to bring a high quality, diverse lineup of speakers, both topically and demographically to our campus and our community, to be in conversation around contemporary topics of our times. That’s really the basis of this whole speaker series, and that’s why it’s Face to Face. It’s to showcase that it’s more than one person in conversation,” Henderson said. The guest speaker will always be in conversation with a “distinguished” moderator, typically a member of the university community. Additionally, the discussion format is intended to model inclusive dialogue.

Shortly after the series was officially announced in early March, the team was able to sell a substantial number of subscriptions and had huge success “right out of the gate.” However, just days later, the university shut down due to the coronavirus pandemic.

“Our team began to work tirelessly on how to pivot and as things became more transparents about the pandemic, we were able to reschedule all of our in person events to the spring semester. And then we were able to create a virtual offering,” Henderson said.

This fall, the series was slated to host Madeline Albright and Colin Powell, two former secretaries of state, along with cellist Yo-Yo Ma and author Malcolm Gladwell. But each of the events has been rescheduled to occur in-person in the spring or next fall. Until the university can safely host in-person events, the Face to Face team has worked to secure guests for virtual events like the discussion on Tuesday. Though these events were not originally scheduled as part of the lineup, they have garnered attention.

“Even though we had to make the pivot, the advantage is when you’re virtual, you can have unlimited capacity, and that has enabled us to engage alumni across the country, to engage students who are remote across the country, who are not on campus with us, and so many other folks from the community,” Henderson said. According to an email from the university, a total of 1,473 households registered for the event, which was free for students, faculty and staff of all institutions of higher learning in the Winston-Salem area, as well as students and faculty from local high schools.

For future in-person events, Henderson said there will be a student-only forum at 5 p.m. the day of the event, where students from the local area will have the opportunity to meet with the guest speaker or speakers in a Q&A format. Henderson described this as an opportunity for Wake Forest students to cross-pollinate with other students in the Winston-Salem area. After the event, participants can sign up for a community conversation, which will be moderated by trained Wake Forest students.

While events may occur virtually for the foreseeable future, the Face to Face Speaker Forum offers the university and local community a unique opportunity to hear the wise words of some of our country’s most influential leaders in prominent fields.

“It’s been so much fun and privilege working with my team to create this wonderful asset for our institution and the community,” Henderson said.