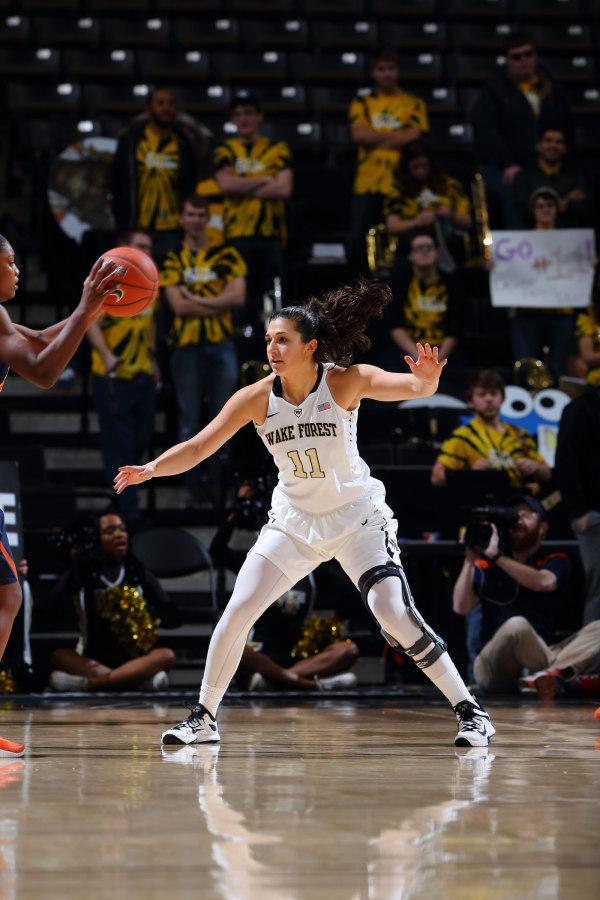 The Demon Deacons fell to the Syracuse Orange on Jan. 17 with a score of 91-65. Amber Campbell led Wake Forest in scoring, dropping 25 points and shooting 100 percent from the free throw line; however, this performance was not enough to win the game.

Syracuse was on fire from three-point land throughout the game.

In the first half, they made nine of 18 3-point shots, making it difficult for Wake Forest to establish any lead.

Syracuse dominated initially; Wake had a few missed layups to start the game and the Orange went on an 8-0 run.

Campbell and Elisa Penna started to turn it up and cut the lead to only four.

This was the closest the Deacs were to catching up.

The margin fluctuated between 10-15 points throughout the first quarter; then, the Orange started to hit more free throws, caused more turnovers, and hit more shots toward the end of the second quarter.

Guard Briana Butler of Syracuse, led her team in three-pointers sinking 4 of 6 just in the first half. Brittney Sykes and Alexis Peterson also contributed to the victory with 11 and 19 points, respectively.

The Orange matched their record of hitting 15 three-pointers in one game, having seven in only the first quarter.

In total, Syracuse hit 15 of 31 three-pointers, while Wake Forest struggled with being only one of 11 from behind the arc.

The number of turnovers didn’t make or break either team; Syracuse finished with 20 turnovers, while Wake Forest had 24.

The biggest disparity between Wake Forest and Syracuse was the depth of their bench.

Amber Campbell cannot lead the team to victory by herself; there needs to be more than one player who can contribute stats like Campbell’s. Basketball, at its most fundamental level, is a team sport, and the Deacs will struggle down the stretch of games this season if they do not start getting consistent contributions from more than just one player. Syracuse had multiple players perform at high levels, bringing their team to victory.

The Deacs face the University of North Carolina Tar Heels on Thursday, Jan. 21 at 7 p.m. in Winston-Salem. This will be the sixth ACC game of the year. The Tar Heels have not played as well this year as in years past and this is a very winnable game.